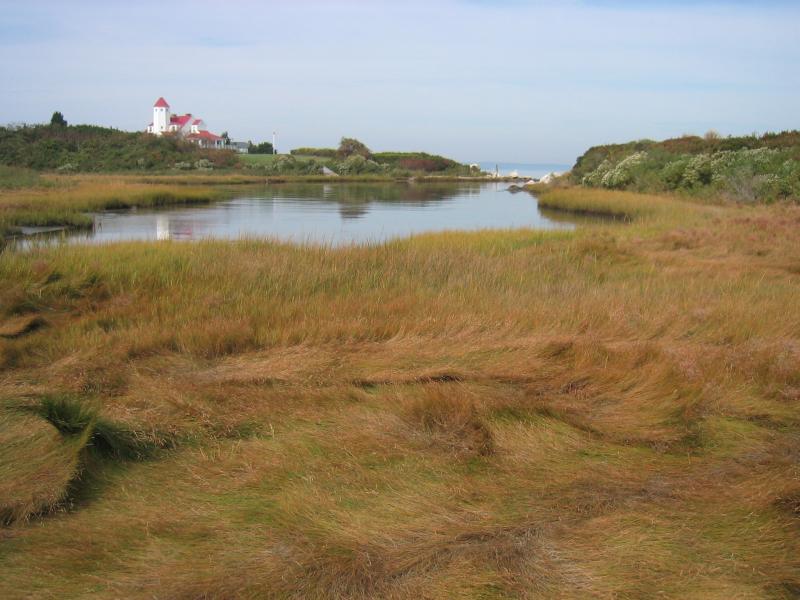 At one time, salt-meadow grass (Spartina patens) was the backbone of Long Island's economy. During agriculture's early years on the Coastal Plain, this "salt marsh hay" was a staple forage crop for livestock. Presence of a marsh with salt hay was a major deciding factor in the settlement of new towns along the New England coast. These "salt meadows" were owned by the town and rights to mow and carry away the hay were auctioned off annually (Kavenagh 1980, Nixon 1982).

There are an estimated 25 to 50 extant occurrences statewide. The several documented occurrences have good viability and most are protected on public land or private conservation land. The community is restricted to sheltered areas of the seacoast in the Coastal Lowlands and Manhattan Hills ecozones, and includes a few moderate sized, good quality examples. The current trend of the community is declining. Substantial primary threats, common to all salt marsh complexes, include ditching and draining, dredging and filling, common reed (Phragmites australis) invasion, poor water quality, diking and impoundment, inlet stabilization, shoreline hardening, wrack accumulation, altered sediment budget, subsidence, changes in water circulation patterns, restricted tidal connection, and altered tidal hydrodynamics.

In recent decades, particularly since 1922, the number, aerial extent, and quality of high salt marshes in New York has declined significantly. It is speculated that these losses are linked to the public works projects of the 1930s, including dredging and filling for major airport construction and urban development. Because high salt marshes are drier, closer to uplands, and easier to fill than low salt marshes, they are thought to have been disproportionately affected (Nixon 1982, O'Connor and Terry 1972). Declines have also been due to ditching for mosquito control; production of salt hay as a forage crop for livestock; and to pollution, including airborne particulates, pesticides, and sewage and stormwater discharge. It is suspected that losses will continue, resulting from ongoing shoreline development, declining water quality, and hydrologic alterations.

The number, aerial extent, and integrity of high salt marshes in New York are suspected to have declined substantially from their historical state. These declines are likely correlated with coastal development, ditching, filling, and changes in hydrology, water quality, and natural processes. Since the mid-1600's, high salt marshes in New England (presumably in New York) have been flooded, drained, impounded, diked, ditched, filled, used to produce forage crops (salt hay) for livestock, and/or extirpated by development (Nixon 1982).

Strive to minimize or eliminate hardened shorelines and maintain low-sloped shorelines within the tidal zone to increase overland sediment input. Maintain functional connectivity between the open ocean and bays with salt marsh complexes to enable full tidal flushing during each tidal cycle. For example, barriers such as railway causeways should have numerous culverts to allow sufficient hydrologic connectivity. If flow restriction devices are needed, those that are calibrated for local tidal hydrology can be used. Avoid dumping dredge spoil onto salt marshes. This community is best protected as part of a large salt marsh complex. Protected areas should encompass the full mosaic of low salt marsh, high salt marsh, marine intertidal mudflats, saltwater tidal creek, salt panne, and salt shrub communities to allow dynamic ecological processes (sedimentation, erosion, tidal flushing, and nutrient cycling) to continue. Connectivity to brackish and freshwater tidal communities, upland beaches and dunes, and to shallow offshore communities should be maintained. Connectivity between these habitats is important not only for nutrient flow and seed dispersal, but also for animals that move between them seasonally. Development of site conservation plans that identify wetland threats and their sources and provide management and protection recommendations would ensure their long-term viability.

Additional inventory is needed on the north and south shore of Long Island and in Peconic Bay. Leads include the nineteen sites that were not selected as reference wetlands by MacDonald and Edinger (2000). Data on rare and characteristic animals are needed.

Future research on high salt marsh should include monitoring community response to sea level rise, sediment starvation, and permanent flooding and studying nutrient exchange processes and relationships to adjacent communities (e.g., saltwater tidal creek, marine eelgrass meadow, low salt marsh, and maritime dunes). More research is needed to address the feasibility of reversing and/or minimizing the impacts that ditching and dredging have had on salt marshes (MacDonald and Edinger 2000).

High salt marsh is restricted to sheltered areas of the seacoast in the Coastal Lowlands and Manhattan Hills ecozones. It is best developed in the Peconic Bay and along the south shore of Long Island. On the south shore, the greatest concentration occurs within the Hempstead Bay wetlands and nearly one half of Long Island's high salt marshes are located west of Gilgo Beach to Jamaica Bay. The community is rare and limited on the north shore (MacDonald and Edinger 2000).

A coastal marsh community that occurs in sheltered areas of the seacoast, in a zone extending from mean high tide up to the limit of spring tides. It is periodically flooded by spring tides and incoming, rising tides. High salt marsh typically consists of a mosaic of patches that are mostly dominated by a single graminoid species. High salt marsh is part of the larger coastal salt marsh ecosystem; it occurs in a complex mosaic with several other communities. These communities include salt shrub and brackish meadow at the upland border of the high marsh; sea level fen, which, in rare cases, is associated with freshwater seepage at the landward edge; low salt marsh at the seaward border of the high marsh and along the edges of tidal creeks that drain the high marsh; and salt pannes in shallow depressions within the marsh.

By mid-summer (July/August), salt-meadow grass has become tall enough to develop the flattened, circular 'cowlick' growth form that is characteristic of this community. The species is also blooming at that time, and its large florets provide a great opportunity to examine the unique structure of graminoid flowers. 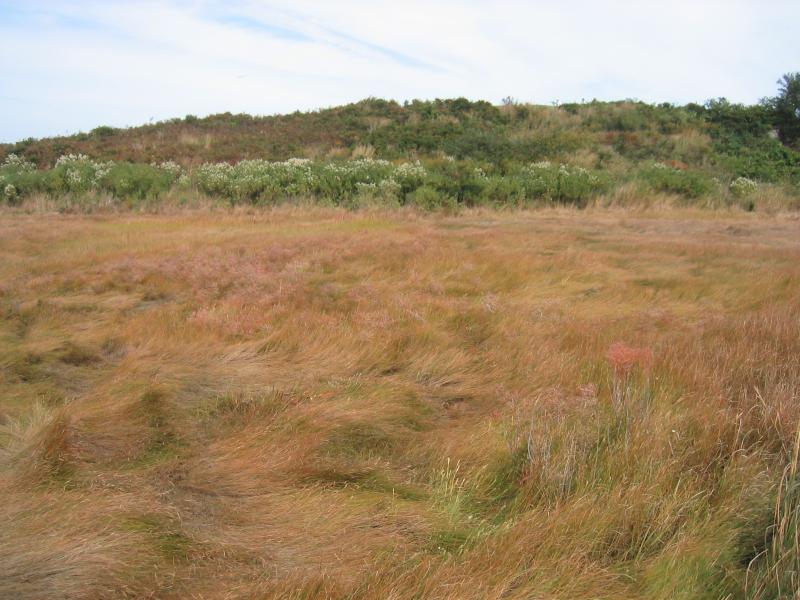 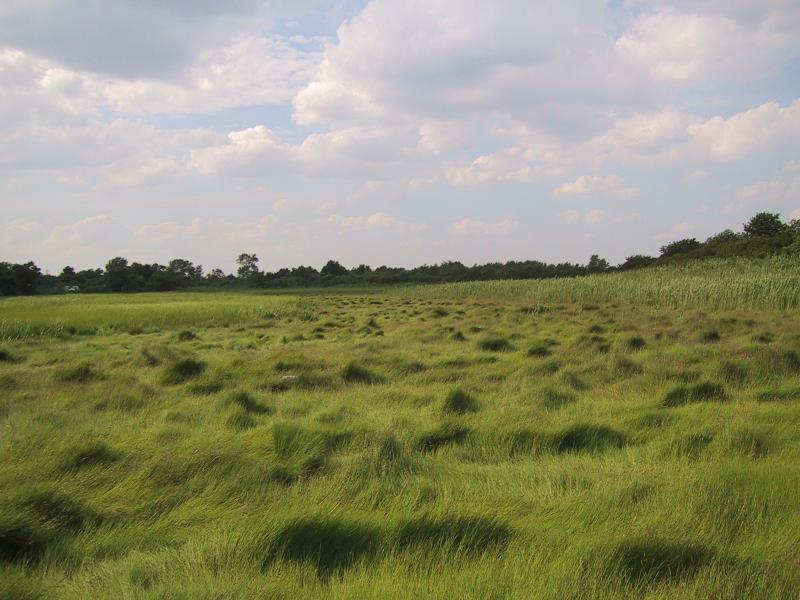 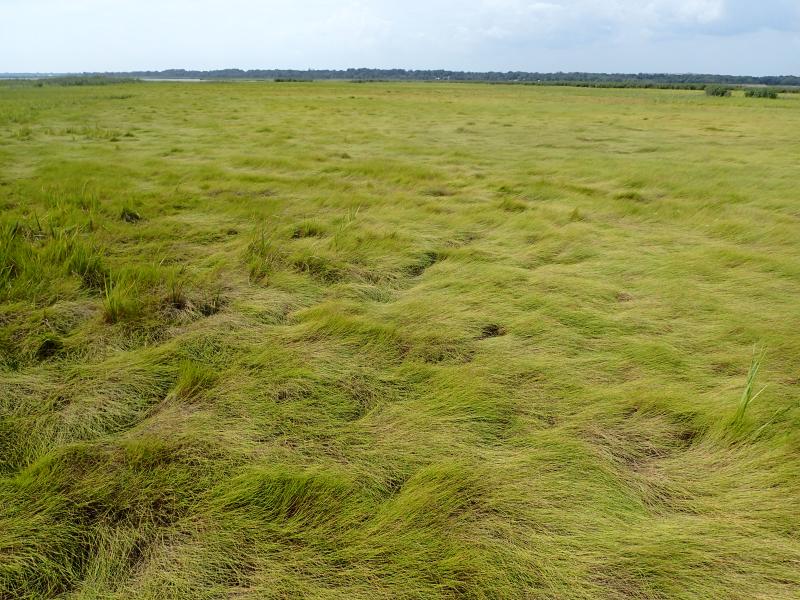 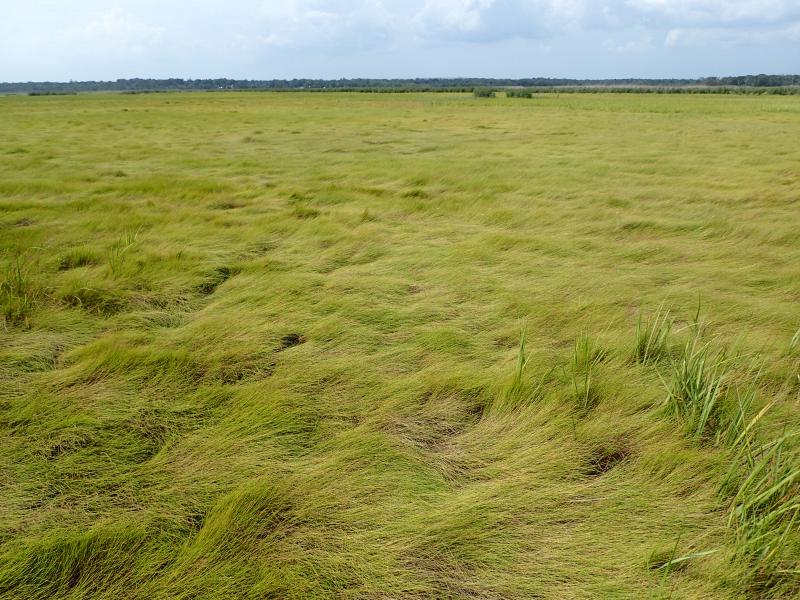 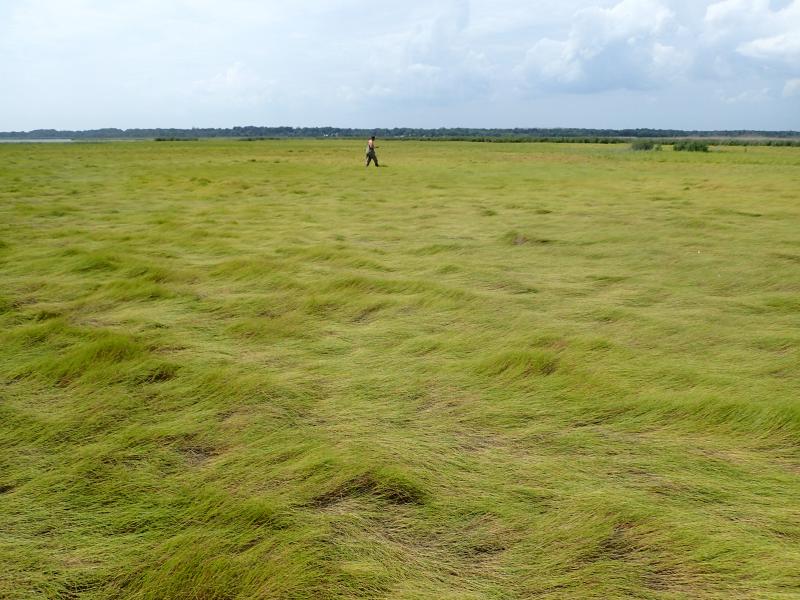 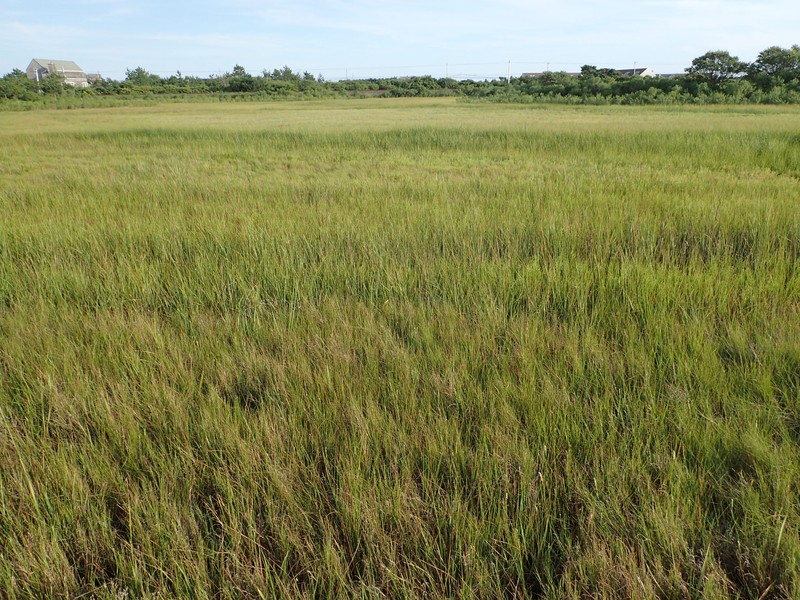 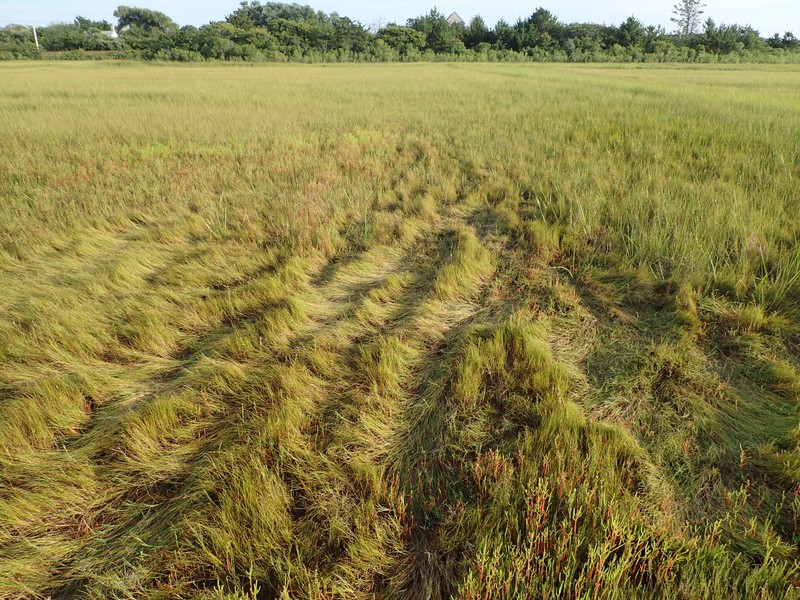 This figure helps visualize the structure and "look" or "feel" of a typical High Salt Marsh. Each bar represents the amount of "coverage" for all the species growing at that height. Because layers overlap (shrubs may grow under trees, for example), the shaded regions can add up to more than 100%.