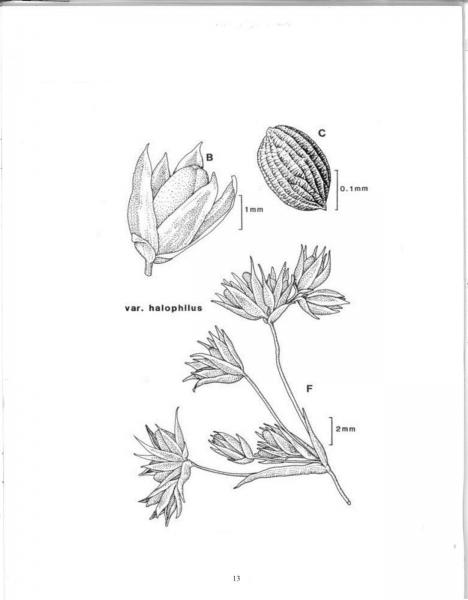 This rush is hard to distinguish from the closely related Juncus bufonius or toad rush and this difficulty is reflected in its species name.

There is one existing population that has not been surveyed in detail. There is also one historical locality.

The only known occurrence in New York turned up in a brackish mitigation wetland with shrubs and trees between a road interchange and the Long Island Railroad. (New York Natural Heritage Program 2012). Salt-loving, occurring along the coast on mud and sand flats above high tide and one margins of saline and brackish lakes. Also occurring inland on bare mud and disturbed ground near salt-works, in roadside ditches, and on highly basic substrates (Clemants 1990).

This species is known only from Suffolk County, Long Island.

In the East this wetland herb occurs on the Atlantic coastal plain from Nova Scotia and Maine south to Long Island where it is rare. There are scattered inland populations in Pennsylvania south to Georgia, Alabama, and Tennessee. It also occurs in scattered states of the western US to California and Alaska and in Canada from Manitoba west to British Columbia.

Doubtful toad rush is a short, soft, annual rush that grows erect or ascending from a branching base up to about 3 dm tall. The leaves arise from the base and the stem and are very narrow, up to about 1.1 mm wide and flat or channeled. The inflorescence is contracted and makes up usually more than half of the stem. The single flowers are scattered among it in the axils of small leafy bracts. Each flower also has a pair of broad, whitish, rough bracteoles at the bottom. The tepals are narrow with a greenish midvein and whitish margins. They are about the same size and 3-6 millimeters long. The inner tepals are mostly rounded, occasionally acute, and often emarginate and mucronate at the tip. The capsules are flattened on the top and as long as or longer than the inner tepals. The seeds are 0.3-0.6 mm long and pointed at each end.

The best time to identify this plant is in fruit.

The much more common and widespread Juncus bufonius has inner tepals that are acute to acuminate, the inflorescence is open and not contracted, and the capsule is acute to subacute, while being clearly shorter than the inner tepals. These species are the only ones in the genus that are soft annuals with single flowers in an inflorescence that makes up most of the plant.

The fruits are visible from July through early November.

The time of year you would expect to find Seaside Toad Rush fruiting in New York.