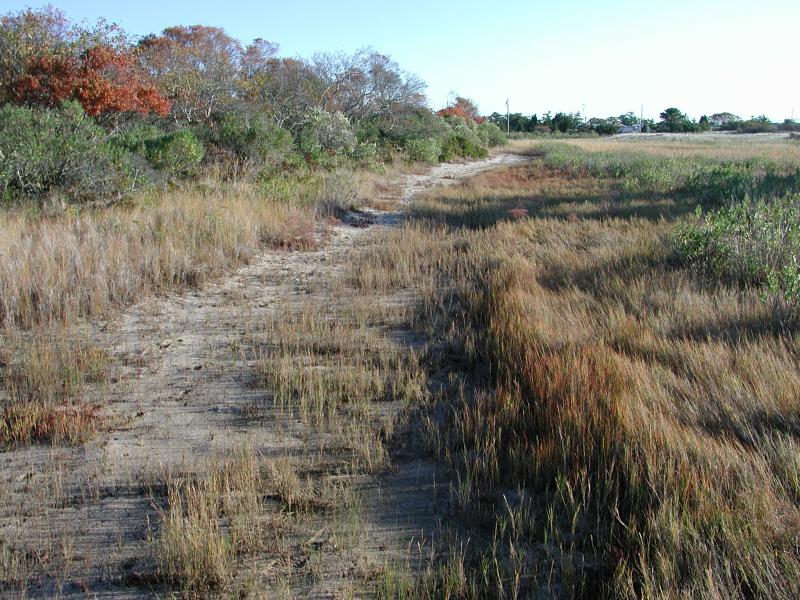 Switchgrass, little bluestem, and big bluestem, common species in brackish meadows, are also characteristic of midwestern tall-grass prairies. Switchgrass, in particular, has multiple commercial uses. It is cultivated and planted for erosion control, maintained as a forage crop for livestock, used to make biodegradable plastics, and is being considered for the mass production of ethanol (McLaughlin and Kszos 2005).

There are an estimated 50 extant occurrences statewide. The very few currently documented occurrences are small, but have good viability and are protected on public or private conservation land. Despite this protection, the community's trend is declining; it is threatened by development activities and exotic flora invasion.

Area of occupancy and community viability/ecological integrity is suspected to be declining, primarily due to development activities (e.g., parking lots, road construction, landscape fragmentation, and hydrologic alterations) leading to community decline and extirpation in urban and residential areas.

The number, extent, and viability of brackish meadows in New York are suspected to have declined substantially over the long-term. These declines are likely correlated with coastal development and associated changes in hydrology, water quality, and natural processes.

The most immediate threats to brackish meadows are from development activities (e.g., parking lots, road construction, and hydrologic alterations). Common reed (Phragmites australis) invasion is another immediate threat to some occurrences. Increased landscape fragmentation and presence of adjacent roads will increase vulnerability to invasion by additional exotic flora. Sea level rise may cause extirpation if occurrences abut hardened cultural features, but this may not be a threat in natural systems.

It would be useful to interpret old aerial photographs to determine the historical extent of this community, especially at reportedly extirpated sites. The impacts of off-road vehicles and visitor use should be evaluated.

Restricted to the estuarine and maritime portions of the North Atlantic Coast, Chesapeake Bay Lowlands, and reportedly the Mid-Atlantic Coastal Plain Ecoregions. The community occurs from New Hampshire south to North Carolina (NatureServe 2009).

A moist, moderately well-drained brackish (0.5-18 ppt) perennial grassland with occasional isolated shrubs that is typically situated in a belt at the upper edge of salt marshes bordering sandy uplands where it is the graminoid-dominated counterpart of salt shrub. It may also occupy the drier, less brackish portions of interdunal swales. Brackish meadows may be classified as an upland community based on the presence of several upland dune species, but are placed here because of the strong influence of the infrequent tidal processes and proximity to salt marshes. The community usually develops in areas with a unique combination of soils and hydrology on deep deposits of periodically windblown or overwashed gleyed sands. The community is usually flooded only during spring tides and/or during major coastal storms, approximately two to three times per year. Periodic sand deposition and volatilized saltwater deposition are thought to prevent dominance by tall shrubs via burial and top killing of shrubs. Soil salinity over long periods of time is relatively low but may show vast fluctuations over short periods of time, producing a constantly stressed environment. Salinity is periodically raised by the regular cycling of tides, inundation during spring tides and storm surges, and volatilized saltwater deposition. These epsodic pulses of salt result in woody plant die-off. Salinity is periodically lowered by dilution from rainwater and the presence of a thin fresh groundwater lens elevated over the underlying saltwater. The community usually occurs in close association with salt shrub and at slightly higher elevation than high salt marsh. It may develop into high salt marsh after occupation by salt-meadow grass (Spartina patens) and development of a peat layer in response to a more regular tidal influence.

Known examples of this community have been found at elevations between 3 feet and 7 feet.

The showy graminoids that dominate this community typically bloom in mid- to late summer. 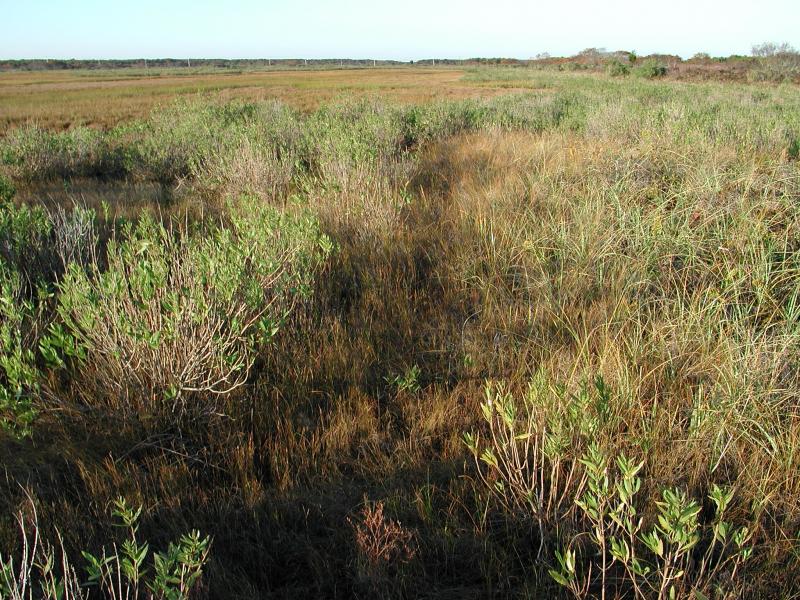 This figure helps visualize the structure and "look" or "feel" of a typical Brackish Meadow. Each bar represents the amount of "coverage" for all the species growing at that height. Because layers overlap (shrubs may grow under trees, for example), the shaded regions can add up to more than 100%.

McLaughlin, Samuel B. and Lynn Adams Kszos. 2005. Development of switchgrass (Panicum virgatum) as a bioenergy feedstock in the United States. Biomass and Bioenergy 28: 515-535.