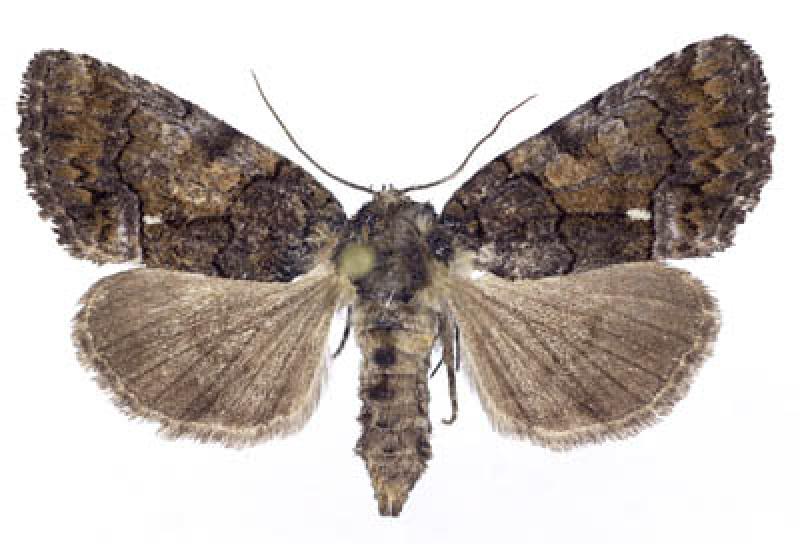 There was some uncertainty regarding whether or not Chytonix sensilis is actually the same species as the very similar Chytonix ruperti, and recent updates to taxonomy consider them synonymous (Lafontaine and Schmidt 2011).

It is not clear how rare this is in New York. At present, definite populations of Chytonix sensilis are recognized in New York in the Albany Pine Bush and on Long Island as well as Jefferson, Clinton, and Monroe counties. The number of known occurrences of Chytonix sensilis has increased with increased inventory work in appropriate habitats and it is very likely that a few more populations occur on Long Island. However, there are only seven known locations in New York.

This species should have increased both on Long Island, after the massive wildfires in the 1990s, and at the Albany Pine Bush due to prescribed burning. More data on the short-term trends is needed, however.

The long-term trend indicates that there has been a moderate decline in the population from historical numbers, as a large amount of habitat has been developed around Albany and on Long Island.

The biology of this species is poorly known, making the threats difficult to assess. The larva is a fungus feeder that forages in the leaf litter, apparently feeding mostly off of dead wood. At some locations, lack of fire could reduce populations (NYSDEC 2015), but complete burning of the occupied habitat also could be a threat since most or all of the year is spent above ground.

In sandy pine barrens, this species seems to be somewhat fire dependent. However, it is unclear if this is the case on flatrock barrens habitats. Populations in Ontario can be dense with or without recent fires (Dale Schweitzer).

More surveys to determine extent of occurrence and research into specific threats and management needs should be conducted.

This species is typically confined to xeric (dry) sites such as pitch pine-scrub oak barrens and open oak woodlands (Wagner et al. 2003). It is known from pitch pine-scrub oak barrens at Albany and Long Island and sandstone pavement barrens in Clinton County. The habitats are similar elsewhere in the range and are usually on sand, but they occasionally occur on acid rocks like granite. Many apparently suitable habitats lack this species. Populations may increase in the decade after fires, but they can persist at low density for decades without fire.

The known populations of this species are disjointed throughout New York. Known occurrences are in the Albany area and Long Island, as well as Clinton, Jefferson, and Monroe Counties.

Chytonix sensilis is very similar to other species in the genus. The fore wings are brown or reddish. When wings are folded, the black postmedial line is straighter across the back and then bends down on the sides, rather than a continuous even curve like C. palliatricula, with a small white spot attached to it (BugGuide 2014; Beutenmuiller 1901). The wingspan is approximately 31 mm.

The flight season is a strong clue that will aid in the identification of this species, as it will be found in July or August. Any specimens found before mid-July and in September, except possibly on Long Island, can be assumed to be Chytonix palliatricula. It is much grayer than Chytonix palliatricula and differs in genitalia (Forbes 1954). The subterminal line of the forewing is preceded by a vague dark shade on Chytonix sensilis. Any identification of this species must be verified by an expert and may require genitalia dissection if the specimen is worn. Field photographs under artificial lights should not be used for the basis of identification.

The adults come readily to blacklights and sometimes also come to bait.

The larvae apparently graze fungi in the leaf litter, mostly off of dead wood.

This species is strictly single brooded flying in about late July to mid-August in the Albany area (BugGuide 2014). It likely occurs a bit later on Long Island (in August) and earlier in Clinton County (by mid-July). Specimens of this genus collected later or earlier than these dates are the common Chytonix palliatricula, which likely flies from May into September, as it does in New Jersey.

The time of year you would expect to find Sensitive Chytonix reproducing, larvae present and active, and pupae or prepupae present in New York.

There is disagreement among experts as to whether Chytonix ruperti is a synonym (or subspecies) of Chytonix sensilis or a separate species, as was originally proposed. Much of this confusion stems from the failure to recognize that Ontario, Wisconsin, most of Michigan, and northern Ohio populations are referable to Chytonix ruperti, as is suggested by the ranges given by Forbes (1954). The differences in wing characters are quite minor (see Forbes 1954), but do seem consistent at least in Ontario and Wisconsin. The genitalia difference is also quite minor and it is unknown whether this is consistent or not. If these in fact are separate species, it is possible some recent New York records would refer to Chytonix ruperti, but those from the Albany area and all recent specimens from Long Island are normal Chytonix sensilis.

Lafontaine, J.D. and B.C. Schmidt. 2011. Additions and corrections to the check list of the Noctuoidea (Insecta, Lepidoptera) of North America north of Mexico. In: Schmidt B.C, Lafontaine J.D (Eds) Contributions to the systematics of New World macro-moths III. ZooKeys 149:145-161.

Information for this guide was last updated on: May 12, 2021