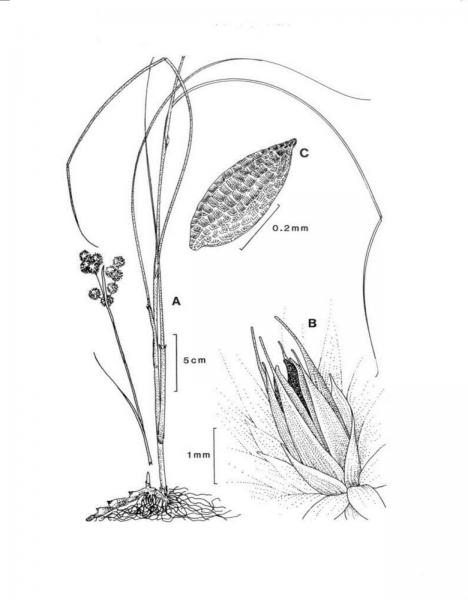 The species name means short-fruited because the fruit of this species does not extend beyond the tepals and it does not have the long tails that some species have on their seeds (Fernald 1950).

There is only one existing population with a couple of hundred plants. There are nine records from the early 1900s which need to be rechecked although one of these no longer exists because its habitat has been destroyed by development.

This plant has always been very rare in New York but it seems to have declined over the past 100 years although more detailed surveys are needed to confirm this.

Succession may be a threat if the area is not kept open. Purple loosestrife also grows nearby.

The open meadow habitat needs to be maintained and purple loosestrife should be controlled.

More research is needed into the habitat preference for this species in order to narrow down areas to search. Propagation studies are needed to find out if populations could be augmented.

In New York are only occurrence is in a wet meadow within a successional old field on an acidic loam.(New York Natural Heritage Program 2012). Damp siliceous, argillaceous or peaty soil (Fernald 1970). Damp or wet soil (Gleason & Cronquist 1991).

There is one known occurrence in the Bronx and historical records from Nassau and Suffolk counties on Long Island.

This rush is distributed in the Atlantic coastal states from Massachusetts south to Georgia but it is most common in the central US from Ohio to Illinois south to Alabama and west to eastern Texas, Oklahoma and southeastern Kansas. It is rare in its northern limits from New York and Pennsylvania to Michigan and Ontario.

This rush has stems that are erect and 4-9 dm tall. The rhizomes are tuberous. The leaves are terete with cross partitions and they are not longer than the inflorescence. The leaf sheaths are smooth and not ribbed. The flowers are in rounded clusters and pale green to dull brown, without subtending bracteoles. There are 3 stamens and the tepals are long and narrow at the tip (subulate). The capsules are ovoid, shorter than the tepals in the house do not stick together at the top. The seeds are clear yellow-brown and not tailed.

This rush is best identified in fruit.

Another Long Island rush, Juncus scirpoides, sedge rush, has long narrow capsules that stick out from the tepals and the valves stick together at the top after it opens.

This rush produces fruit in July through early November.

The time of year you would expect to find Short-fruited Rush fruiting in New York.