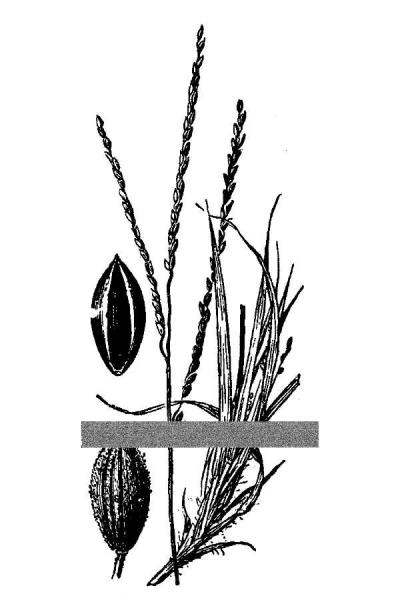 The name for the genus comes from the Latin for finger and refers to the fingerlike flowering stalks of the genus (Fernald 1950). Even though some species of crabgrass are known for their weediness in lawns, Digitaria filiformis is not weedy even though it can occur in habitats preferred by weeds, like roadsides and open sandy areas. It may often be overlooked because it is small and delicate.

There are 5 existing populations, but only one population has over 100 plants. There are 30 historical occurrences, but almost all very old records are from western Long Island and New York City and are considered extirpated.

There is not enough recent information to understand short-term trends.

There has been a very large decline in numbers over the last 100 years, as most of the open habitat of this species was developed. There seems to be plenty of habitat left on eastern Long Island, but numbers are still low so the long-term trend is not encouraging.

Since many of these populations occur within small natural areas or human-disturbed areas, they are threatened by direct development, indirect consequences of development such as increased human use of trails and dumping, and by invasive species.

Research on habitat preference is needed because it seems to grow in disturbed habitats that are very common on Long Island but it is only in a very small portion of this habitat.

This grass is currently known from Suffolk County, but was historically known west through New York City, north to Ulster County, with a disjunct location in Yates County. There are also unsubstantiated reports from Dutchess and Albany counties.

This grass is most common from southeastern Pennsylvania, west to Illinois and Eastern Kansas, then south to East Texas. It reaches its northeastern limits in southeastern New York north to New Hampshire, where it may be extirpated. It also extends south into Mexico.

Digitaria filiformis is a grass with branching stems up to 150 centimeters long, sometimes rooting at the lower nodes The leaves are 2-6 millimeters wide, the lower leaf sheaths with soft hairs. The stems bear 2-6 erect or ascending racemes, each with a slender, 3-angled rachis, and spikelets borne in groups of 2 to 5. The spikelets are 1.3 to 2.8 millimeters long, with the first glume absent, and the second glume and sterile lemma are usually pubescent with gland-tipped hairs. (FNA 2003).

The entire plant with flowers, or preferably fruit, is needed for identification.

All of the other species of Digitaria found in New York have racemes with relatively wider (0.5 to 1 millimeter wide), winged rachises compared to the slender (less than 0.5 millimeters wide), wingless rachises of D. filiformis.

This species flowers in August and fruits may persist through October.

The time of year you would expect to find Slender Crab Grass fruiting in New York. 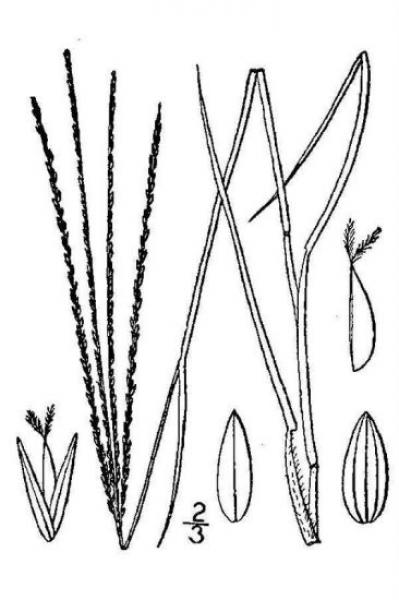 Information for this guide was last updated on: February 25, 2011