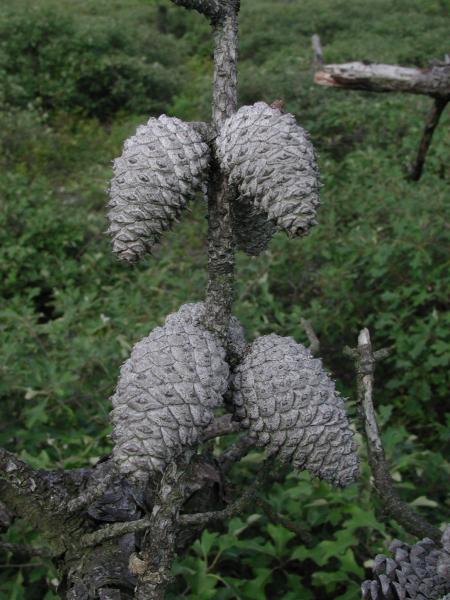 In the absence of fire, which may be required to maintain this community, pitch pine-heath barrens seem to naturally succeed to pitch pine-oak forest and pine-northern hardwood forest communities. The barrens may have been burned somewhat regularly by early settlers to maintain blueberry crops.

This is a relatively uncommon natural community with an estimated 15 to 30 extant occurrences statewide. A few documented occurrences have good viability and are protected on public land or private conservation land. This community has a limited statewide distribution (correlated to old lake deltas and outwash plains in the Adirondacks). Although there are a few occurrences over 450 acres in size, most are around 100 acres or less. Threats to this community include fire suppression, fragmenting development, recreational overuse, habitat alteration, and to a lesser extent invasive species.

The number and acreage of pitch pine-heath barrens in New York have probably declined slightly in recent decades due to fire suppression, disturbance by off-road vehicles, and development.

The number and acreage of pitch pine-heath barrens in New York have probably had substantial declines from historical numbers due to fire suppression, fragmentation, disturbance by off-road vehicles, and development.

As a fire-dependent natural community, the primary threat to pitch pine-heath barrens is the suppression of fire. Other threats to this community include fragmenting development (e.g., residential, roads, utility ROWs, trails), recreational overuse (e.g., ATV use, trampling/off trail hiking), and habitat alteration (e.g., sand and gravel mining, excessive logging, trash dumping). Although not currently considered a major threat, invasive species, such as forked three-awned grass (Aritida basiramea), may become a problem at some sites in the future. Southern pine beetle (Dendroctonus frontalis) is a bark beetle that infests pine trees, such as pitch pine, white pine, and red pine. Southern pine beetle is native to the southeastern United States, but its range has spread up the east coast to Long Island, New York in 2014. Natural communities dominated or co-dominated by pines would likely be most impacted by southern pine beetle invasion.

The soils are acidic and nutrient poor. Any soil enrichment contamination (e.g., from septic leach fields and fertilized lawns) in or around the barrens may alter its community structure and function. The open structure of this community is often maintained by fire and can present a fire hazard to existing and proposed development. Unprotected structures located within or near this community are more susceptible to damage from fire.

Inventory all existing occurrences with records greater than ten years old. Continue searching for large sites in northern New York sandplains that are in good condition (A- to AB-ranked). Need critical assessment of identity for several occurrences using statistical ordination techniques, in order to clearly separate pitch pine-heath barrens from boreal heath barrens and from the successional bleuberry heath community.

Determine the optimal fire regime for this community. This community needs to be compared to heath barrens in other states (e.g., Maine or Michigan) and in Canada to evaluate quality and composition in a regional context.

Scattered within northern and north-central New York in the northeastern portions of the Great Lakes Ecoregion and adjacent parts of other ecoregions, where it is apparently restricted to sandplains. Currently known only from the Champlain Valley of Clinton County and Erie-Ontario Plain of Oneida County. New York is near the southeastern edge of range extending north into Canada and Maine, and west to northern Michigan and Wisconsin.

This community is apparently restricted to sandplains in the Great Lakes basin. Assuming that jack pine barrens should be lumped into the community concept, the range spans north to Canada, east to Maine, west to northern Michigan and Wisconsin, and south to New York. The more restricted pitch pine-dominated barrens are probably restricted to southern Ontario, northern New York and Vermont, and possibly New Hampshire and Maine.

This pitch pine-heath barrens community is structurally intermediate between a forested and an open upland community. It has a sparse tree canopy and a moderately dense shrub layer. There are scattered herb-dominated savannah openings throughout.

Known examples of this community have been found at elevations between 100 feet and 761 feet.

This figure helps visualize the structure and "look" or "feel" of a typical Pitch Pine-Heath Barrens. Each bar represents the amount of "coverage" for all the species growing at that height. Because layers overlap (shrubs may grow under trees, for example), the shaded regions can add up to more than 100%.

Information for this guide was last updated on: October 26, 2020