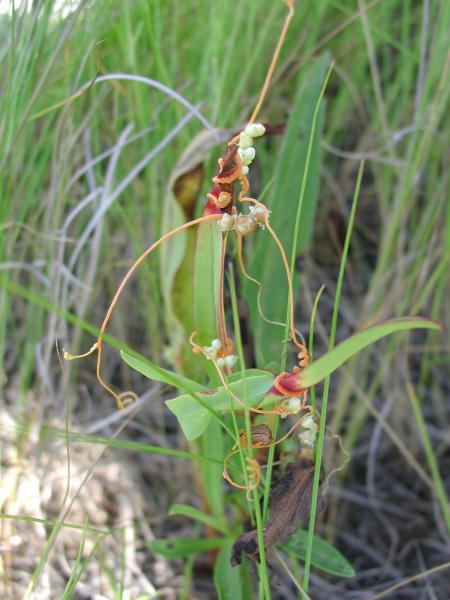 State Conservation Status Rank
S1S2
Critically Imperiled or Imperiled in New York - Especially or very vulnerable to disappearing from New York due to rarity or other factors; typically 20 or fewer populations or locations in New York, very few individuals, very restricted range, few remaining acres (or miles of stream), and/or steep declines. More information is needed to assign either S1 or S2.
Global Conservation Status Rank
G5T4T5
Apparently or Demonstrably Secure globally - The subspecies/variety is uncommon to common in the world, but not rare; usually widespread, but may be rare in some parts of its range; possibly some cause for long-term concern due to declines or other factors. More information is needed to assign either T4 or T5. (The species as a whole is common globally.)

Southern dodder was not known in New York until 1996 when it was discovered in a red maple-sweetgum swamp on Staten Island. The common name may come from a Middle Dutch word meaning the yoke of an egg referring to the yellow color of some of the flowers of Cuscuta. Dodder is an annual but some of its connections to the host plant (haustoria) may survive the winter and start new plants already on the host in the spring. The vines always seem to wrap around the host plant in a counterclockwise direction. Dodder is a speed demon when it comes to finding a host. Germination, emergence and attachment to the host may occur in as little as 24 hours and the seedling must find a host in 5-10 days or it will die.

There has not been enough recent survey work to determine short-term trends.

This species seems to be increasing its presence in New York. It was not known in the state before 1996 and there are now at least five existing occurrences. It may have been present in the state long before 1996 but was not distinguished from more common species.

Southern dodder may prefer purple loosestrife and the control of this invasive species may also reduce populations of this rare plant. Not enough survey work has been done to fully understand the threats to the species.

Management to protect the host plant will serve to protect Southern dodder. This may not be possible if it means protecting purple loosestrife in wetland areas.

The natural history of this species needs to be studied more in New York, especially its habitat and host plant preference, as well as its seed bank production and dispersal. Taxonomic work needs to be done to check specimens of Cuscuta gronovii and its varieties to see if they have been misidentified and are actually this species.

The few collections of this species in New York have been from swamps and marshes; more information on its habitat requirements is needed. It has been found growing on smartweed (Polygonum hydropoperoides), jewelweed (Impatiens capensis), and purple loosestrife (Lythrum salicaria)(New York Natural Heritage Program 2007).

In New York this species has been found at only a few sites from the New York City area and up the Hudson Valley as far as Greene County.

Cuscuta obtusiflora var. glandulosa reaches its northeastern limit in New York. There are known locations in Connecticut, Minnesota, and California, across the southern states and south to the Caribbean; another variety of the same species occurs in South America.

Dodders are parasitic, annual plants, the seedlings attaching to a host plant soon after they sprout. The mature plants lack chlorophyll, roots, or leaves. They consist only of the pale yellow or orangish stems, attached to the host plant via numerous haustoria (suckers), and the compact (2-2.5mm) flowers. With prolific individuals, the overall appearance is of a tangled mass of bumpy orange string sprawled and twining over the host plant. Upon closer inspection, southern dodder has nearly sessile, white, 5-parted flowers which form dense clusters. The sepals are united at the base, and the calyx-lobes reach to the sinuses of the corolla. The fruits are commonly wider than they are high, with a depressed beak (Gleason and Cronquist 1991).

This species is best identified when in flower.

This species flowers from August through September, and the fruits persist through mid-November.

The time of year you would expect to find Glandular Dodder flowering and fruiting in New York.