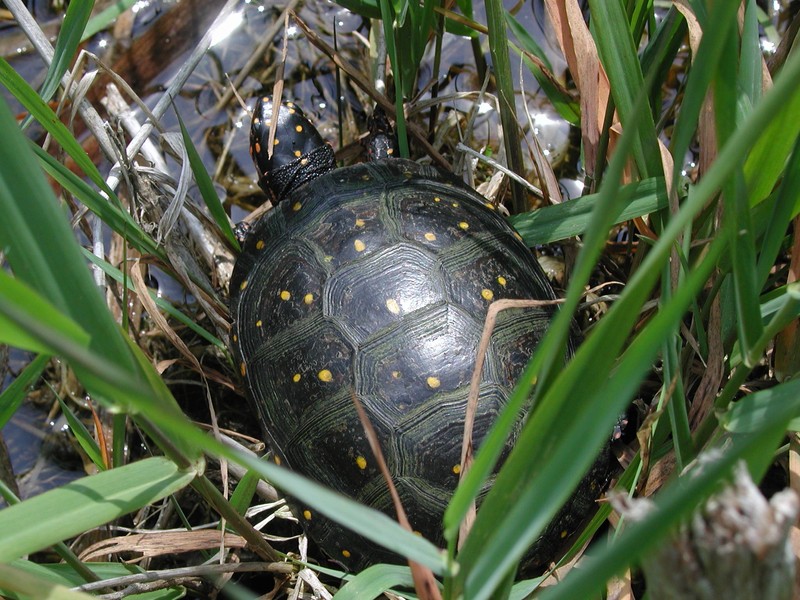 The yellow spotted pattern on the spotted turtle’s carapace may resemble floating duckweed, which could reduce the turtle’s likelihood of being captured by a predator when in certain habitats.

Spotted turtles appear to be widespread throughout the southern portion of the state and are most common in the Hudson Valley counties, but there has probably been less searching done in other parts of the state. Populations have been declining throughout their range in New York due to threats such as pet trade collection, pollution, and habitat destruction (NYSDEC 2019).

Spotted turtle population trends have not been well documented. However, they were once considered common in the northeast and appear to have declined throughout its range, presumably due to loss of habitat as well as declining water quality and collection for the pet trade (Milam and Melvin 2001, Natureserve 2018, NYSDEC 2019).

Spotted turtle populations seem to have declined since the early 1900s when it was reported to be common (NYSDEC 2019).

Spotted turtles face many threats. Their wetland habitats are threatened by invasive species, encroachment and development, particularly wet meadows which are not often identified as wetlands and fens which may be small and not regulated. They are also threatened by collection for the pet trade, and road mortality from crossing roads, especially in searching for nesting locations and suitable upland summer habitat (Ernst and Lovich 2009). Gibbs and Shriver (2002) found that terrestrial and semiterrestrial turtles, such as Clemmys, are impacted by habitat fragmentation from roads and that roads are a potential contributor to population decline in the northeastern United States. Spotted turtles are also negatively affected by wetland draining and an increase in predator populations, such as crows, raccoons, and coyotes (Gibbs et al. 2007).

Water and habitat quality in suitable wetland complexes should be managed by avoiding the use of chemicals in and near seasonal wetlands, excluding all vehicle traffic from wetlands, and removing or controlling invasive species and woody plant encroachment (Mitchell et al. 2006). Land managers should also minimize altering wetland habitat by avoiding filling, draining, ditching or damming wetlands or doing activities that lead to excessive groundwater withdrawal in or around wetlands. Protect small wetlands and groups of wetlands, as well as the terrestrial habitats surrounding and connecting them (Joyal et al. 2001). The creation of safe travel passages underneath roads and railroad tracks would reduce vehicle mortality (Ernst and Lovich 2009). Kaye et al. (2005) found that spotted turtles in Massachusetts used a box culvert to move between the sides of a wetland that was recently bisected by a highway relocation. The 6 foot by 6 foot culvert was found to be an effective means of allowing the turtles to continue their normal movements between habitats after the road was constructed. Creation and enhancement of natural and artificial nesting sites may increase spotted turtle nesting success and reduce road mortality of gravid females (Beaudry 2010).

Research and monitoring to determine population trends, as well as life history and habitat use of spotted turtles in New York, is necessary. It may also be desirable to get information on the number of individuals in some sites so that some of the best occurrences can be identified. Monitoring of habitat and water quality in areas with known populations would be helpful (NYSDEC 2019).

Spotted turtles generally require clear, clean water with a soft substrate and aquatic or emergent vegetation (Ernst and Lovich 2009). In New York, habitat usage tends to vary seasonally. Vernal pools and small permanent pools are often used in the spring, although other habitats such as marshes, fens, and open early successional wetlands may also be used (Chaloux et al. 2010). Upland forests may be used during dormancy in parts of the summer and for travel between wetlands (Gibbs et al. 2007, Joyal et al. 2001). Spring wetlands used most frequently in Maine were characterized by abundant wood frog (Lithobates sylvaticus) egg masses and high tree cover, while forested wetlands were avoided (Beaudry et al. 2009). Females may travel up to several hundred yards to find a nesting site in early June. Nests are dug in sunny locations in grass or sedge tussocks, sphagnum moss, or loamy soils (Gibbs et al. 2007). Beaudry et al. (2010) and Joyal et al. (2001) found that in Maine spotted turtles may be more likely to nest in anthropogenic sites, such as backyards and agricultural fields.When temperatures get too high, spotted turtles may estivate in the bottom of pools of running water or within muskrat burrows, or they may move to uplands where they burrow into the ground or under vegetation (Ernst and Lovich 2009, Joyal et al. 2001 ). These turtles will overwinter in wet meadows, forested swamps, or sphagnum bogs. Spotted turtles on Long Island have also been found to use brackish water in coastal systems with emergent vegetation (Chaloux et al. 2010).

This species is found from southern Ontario and Maine south to Florida, and west to northeastern Illinois and Michigan (Ernst and Lovich 2009).

This is a small turtle with a smooth, black, keelless carapace with a pattern of small, round yellow spots (Ernst and Lovich 2009). The head, upper neck, limbs, and tail are black, and often the head, neck, and limbs are spotted. The plastron is yellow or yellow-orange with a large, black spot on each scute. Older turtles and sometimes hatchlings and small juveniles may lack or lose yellow spots. Spotted turtles are sexually dimorphic. The males are smaller with longer and thicker tails, with a concave plastron, tan chin, and brown eyes. Females are larger than males, have shorter tails, and have a yellow chin, and orange eyes.

Yellow spots on the skin and carapace.

The time of year you would expect to find Spotted Turtle present, active, and reproducing in New York. 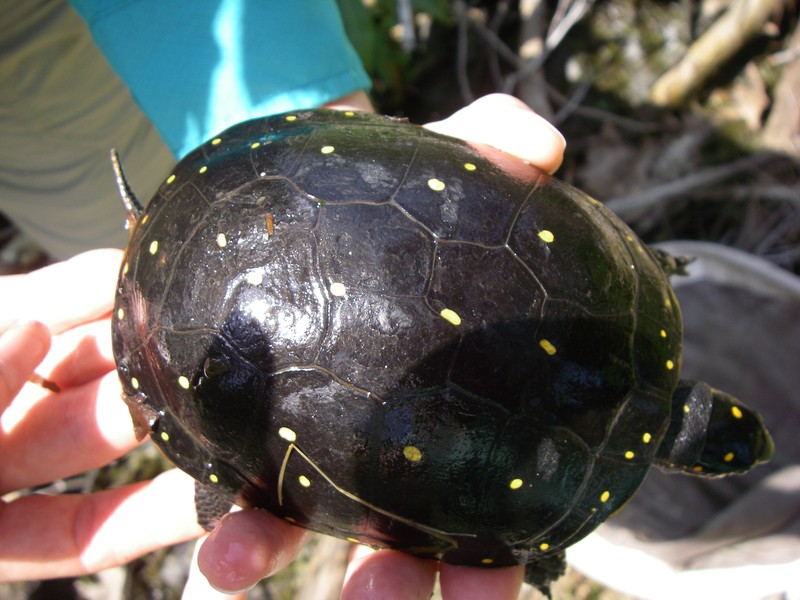 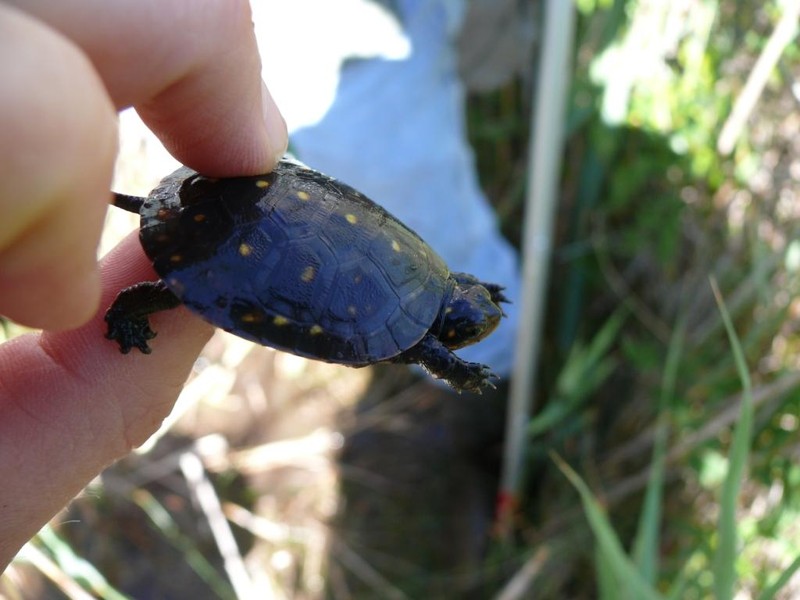 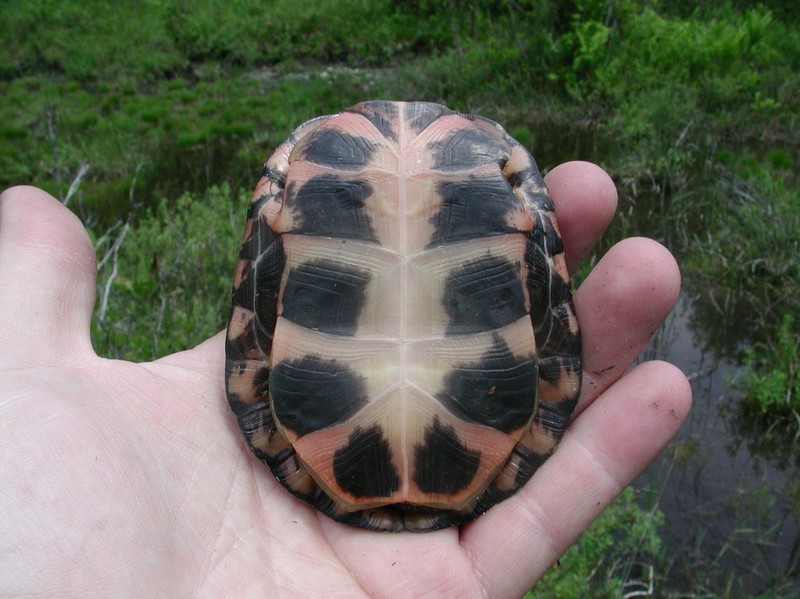 Information for this guide was last updated on: March 7, 2019