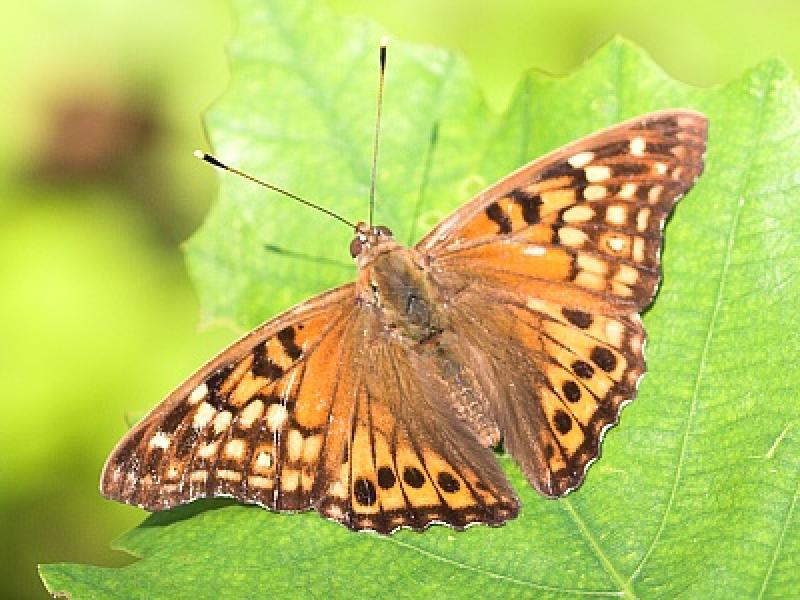 State Conservation Status Rank
S2S4
Imperiled or Vulnerable in New York, or Apparently secure - Conservation status is uncertain; could be very vulnerable, or vulnerable, to disappearing from New York due to rarity or other factors, or could be uncommon but not rare in New York. More information is needed to assign either S2, S3 or S4.
Global Conservation Status Rank
G5
Secure globally - Common in the world; widespread and abundant (but may be rare in some parts of its range).

This species has a limited range in New York. It is likely a permanent resident in southeastern New York, although individual colonies can be transient. Its status is uncertain elsewhere.

The short-term trends are unknown, although this species could increase or stabilize with a warming climate.

The threats include habitat destruction, leaf raking, and spongy moth (Lymantria dispar) spraying. Larvae of this species were documented to be highly sensitive to Bt (Bacillus thuringiensis - a bacterial biological control used on spongy moths) (Peacock et al. 1998). Like many gregarious species, population numbers can fluctuate greatly, partially due to parasitism, and small colonies may not persist in some years. Cold winters without snow cover might also eliminate populations in New York.

Leaf litter under hackberries (Celtis spp.) should be left undisturbed from mid-August into May since the larvae spend most of the year hibernating there (Dale Schweitzer).

This species is potentially found in any shaded habitat that contains hackberry (Celtis spp.). Although it does not require pristine habitat, it would would not be likely to be found on lawns. Shapiro (1974) indicates that habitats are generally bottomlands in New York.

This species has been found in the southern counties as far north as Tompkins County. It turns up most often in the southeastern Hudson Valley counties near New York City, including Long Island. This species can be reliably seen in some places (Shapiro 1974, Glassberg 1993) and is almost certainly a permanent resident in southeastern New York, although individual colonies can be transient. Its status is uncertain elsewhere. The range could expand with a warming climate.

As the species is now defined, it occupies most of the range of the eastern hackberries (Celtis spp.), from Connecticut to southern Minnesota south through most of Florida and Texas and well into Mexico, west through northern Mexico and southeastern Arizona (Brock and Kaufman 2003).

Adults are easily identified at least if the upper side is seen. See any butterfly book. Larvae can also be separated. This species lays its eggs in large masses often two layers deep on the underside of hackberry leaves. These can often be identified by Lepidopterists. A. celtis lays eggs singly or nearly so.

The general color and details of the pattern are easily identifiable. See any butterfly guide. The larvae can be identified by the characters given by Wagner (2005) and Allen et al. (2005). The eggs are laid in large masses, often two layers deep, on the underside of hackberry (Celtis spp.) leaves. It should be noted, however, that there are some other moths, notably several Arctiidae, that may lay egg masses on hackberry.

The males are most active earlier in the day than the more common Hackberry Emperor (Asterocampa celtis). The larvae are gregarious, except in the late instars, and multiple individuals may be found in a slightly rolled leaf.

The larvae feed only on various species of hackberry (Celtis spp.). The adults rarely visit flowers and their true feeding habits are not well known. They can be seen visiting sap oozes, fermenting fruits, and moist soil.

The main flight season in New York is July, although Glassberg (1993, 1999) indicates a few individuals in June, August, and September. The species has two or more annual broods through most of its range. The larvae hibernate in the third instar, which is probably reached in August, although a few continue development to produce a partial second brood. Second brood larvae enter hibernation in October (in New Jersey), but it is uncertain how late into the fall overwintering progeny of July adults remain active. The related A. celtis can enter winter diapause, also as third instar larvae, anytime from early July to October in New Jersey (D.Schweitzer) making both its second and third broods partial there. The larvae resume feeding in spring soon after the new leaves begin to appear, but the July flight season suggests they may not resume feeding until about mid or late May in New York. During warm weather, the pupal stage should take no more than two weeks.

The time of year you would expect to find Tawny Emperor reproducing, larvae present and active, and pupae or prepupae present in New York.