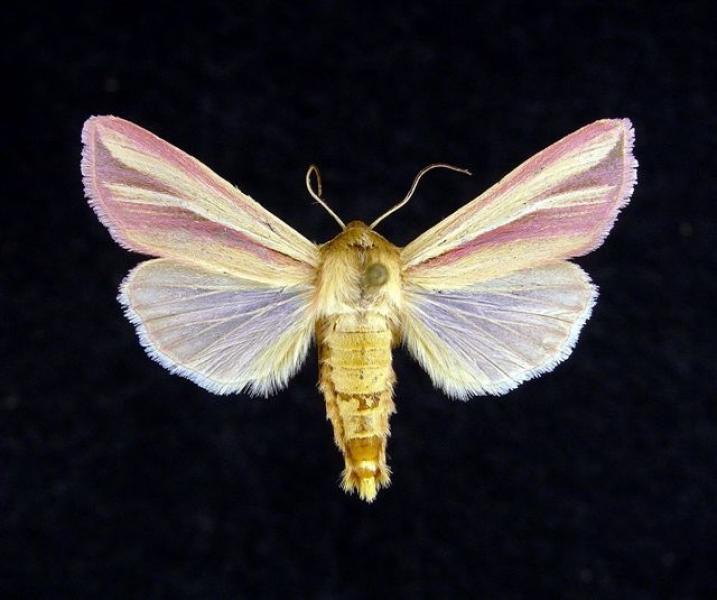 The pink streak, like many other noctuids, is nocturnal during its adult stage and later larval stages (NatureServe 2010).

Forbes (1954) reports the pink streak to be "generally rare." Within New York State, it is known to occur on Long Island, a nearby offshore island, and the Albany Pine Bush. Three populations are documented. Although few populations have been documented to date, the species could be more widespread. It's known to feed on grasses, but other foodplants are possible (Wagner et al. 2008). Additional surveys are needed to better understand its status and distribution in the state.

The short-term trend for the pink streak in New York State indicates the population is stable. At one of the two Long Island documented populations in the state, 15 moths were captured over the course of two survey years between 1995 and 2000, indicating that the population is viable and reproducing. The species was found in the Albany Pine Bush in 2016.

The long-term trend for the pink streak in New York State is unknown, but it is thought to be stable (NatureServe 2010). Forbes (1954) reports the species to be "generally rare."

Threats to the pink streak in New York State are uncertain. Elimination and fragmentation of habitat by commercial and residential development is a threat. Fire suppression and allowing natural succession may eliminate suitable habitat for the species. However, fire is not necessary to maintain habitat in much of the species' range. Summer fires pose a greater threat to the species than fires in the fall, winter, or early spring, since at these times of the year the species is in the pupal stage several centimeters underground (NatureServe 2010).

Maintaining habitat is the main management need. Fire is not necessary to maintain habitat in much of the pink streak's range (e.g., New Jersey, North Carolina, and Indiana), but it might be necessary in some prairie situations. If prescribed fire is used to maintain habitat, typical prescribed burns at unnatural seasons (i.e., fall, winter, and early spring) are probably best. In New Jersey and places northward in the species' range, larvae enter the soil to pupate by mid to late September and go well under ground. With more naturally timed (i.e., summer) fires, mortality (either by direct heat or more likely from loss of food supply) could be quite high to immatures during, and for perhaps six weeks after, the adult flight period (i.e., late July through most of September, in New Jersey and Indiana). Any larvae present during late summer fires or cuts would probably perish. Also, any fire or cutting that prevents normal flowering and seed set of switchgrass (Panicum virgatum) would force females to leave the site to look for other oviposition sites, which they probably would never find in highly fragmented prairie regions. Thus a population could be wiped out even if there were no direct mortality. As far as is known based on approximately 55 eclosions (D. Schweitzer, unpublished data), all pupae emerge after one winter. There is no holdover, so the population must reproduce every summer (NatureServe 2010).

Research is needed to learn the pink streak's foodplant in various parts of its range.

In New York State, the species has been found in a maritime grassland and in pine barrens habitats.

In New York State, the pink streak is known from Long Island and the Albany Pine Bush.

The pink streak range extends roughly from Minnesota to Massachusetts to Florida and Arizona (Wagner et al. 2008). It has a very spotty distribution within the overall range, and it is not present in many states in between. It is probably found mainly in the coastal plain and in prairies (NatureServe 2010).

The pink streak is a medium-sized, straw-colored noctuid moth with prominent pink streaks on the forewings. Often, it has a dark olive thorax. The wingspan is approximately 32-37 mm. See the figure in Covell (1984). The larva is usually brown, but sometimes it is green. It is striped lengthwise much as in Leucania species, several of which are illustrated by Godfrey (1972) (NatureServe 2010).

The combination of pink streaks on the forewings and appropriate wingspan are diagnostic for adults of the species (NatureServe 2010).

The pink streak spends almost 11 months of the year as a pupa several centimeter underground. Therefore it will usually not be vulnerable to fires except during the brief adult and larval periods in late summer. Adults lay eggs in groups inside flowering stems of grasses (NatureServe 2010), particularly switchgrass (Panicum virgatum) in New Jersey (Wagner et al. 2008).

Adults may or may not feed. They do not come to sugar baits and have not been seen on flowers. Larvae feed on grasses. In New Jersey, they feed especially on switchgrass (Panicum virgatum) (Wagner et al. 2008). Apparently larvae feed inside flowering stems for the first instar. It is believed that intermediate instar larvae eat foliage as well as flowers and seeds. The last instar feeds mainly on the developing seeds (NatureServe 2010).

The best time to see the pink streak is during its flight season. In New York State, it has been captured flying from early July until early August.

The time of year you would expect to find The Pink Streak present, reproducing, larvae present and active, and eggs present outside adult in New York.

This guide was authored by: Andrea Chaloux and Hollie Shaw