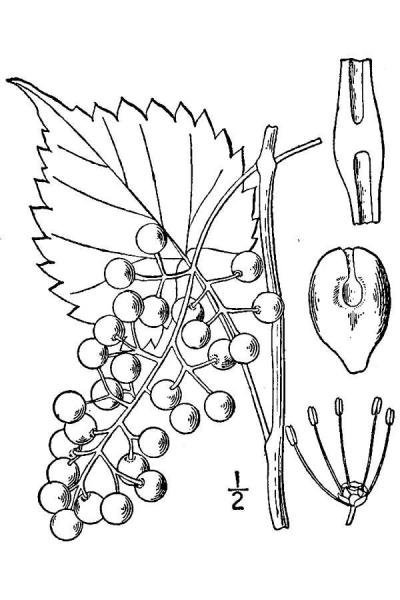 Even though the species name vulpina means fox, fox grape is the name more commonly associated with Vitis labrusca. Evidently, this name came from the fact that foxes were attracted to the grapevines. Winter grape, and another common name, frost grape, refer to the fact that the tart fruits become sweeter after the first frost, not because it grows better where the winters are colder (Wikipedia contributors). In fact it's just the opposite as this species is more common farther south.

There are six verified occurrences, but the species remains under-surveyed so more may be found.

The short term trend appears positive as collections have been made from five populations since 1979. Count data are lacking from these surveys so both recent and historical population sizes are unknown. Three of these were new county records. Additional surveys are likely to document additional extant populations.

The long term trend may be positive as the number of documented populations has increased over the last 35 years. Resurveys are lacking for all the populations so this trend needs to be confirmed.

No specific threats were identified during surveys but competition from invasive exotic lianas could be a threat.

Monitor occupied sites and prioritize the control of any invasive exotic liana species (such as Kudzu) infesting them.

No research needs have been identified.

In New York this grape has been found in a mixed mesophytic forest sloping to a stream, moist banks along the large body of water, and climbing trees along a riverbank (New York Natural Heritage Program 2015). River banks, bottomlands and rich thickets (Fernald 1970). Woods and thickets (Gleason and Cronquist 1991).

This grape has been found at scattered locations around eastern New York in the last 35 years. The historical collections are also scattered in clusters of counties and range from Long Island to Essex and Warren County in the north, and in the counties bordering New York City to the north and east, with outliers in Tioga and Schoharie Counties. This species is under-surveyed and it is likely that additional extant populations remain undocumented.

This grape occurs in North Ameerica from the province of Ontario south and west to South Dakota, Texas and New Mexico, stretching east to New York and Massachusetts, and south to Florida.

Winter grape is a robust, woody, climbing, vine-like plant. The leaves of fertile branches are up to 100-120 mm long, cordate-acuminate, unlobed or merely with angled shoulders, glabrous or promptly glabrate, the lower leave surface green not glacous.  The branchlets are terete and usually green, maturing gray to brown with any purple or red coloration typically limited to one side of the branchlet. On the flowering branches the diaphragm interrupting the pith at the lowest nodes is about 2mm thick. The mature grapes are black, shining, and not glaucous with seeds 3-5 mm long.

Fruits are need to ensure positive identification. Collections shoould include the fruiting vine branches from the lowest nodes, along with intact leaves and fruits

Vitis specimens are frequently incorrectly identified to Vitis vulpina. Most often, the correct identification turns out to be Vitis riparia. Vitis riparia has leaves of various lobing that may closely resemble V. vulpina on some plants. The best method to distinguish V. riparia from V. vulpina is to longitudinally cut into the branch at the lowest node of a flowering branch. On V. riparia, the diaphragm interrupting the pith at the this node is at most 1 mm while it is approximately 2mm on V. vulpina. Also in constrast to those of V. vulpina,  the berries of V. riparia are distinctly glaucous.

Vitis vulpina generally begins flowering in May and blooming continues through June. Typically fruiting begins in early July and fruits persist until the first frost if they are not eaten first.

The time of year you would expect to find Winter Grape vegetative, flowering, and fruiting in New York.