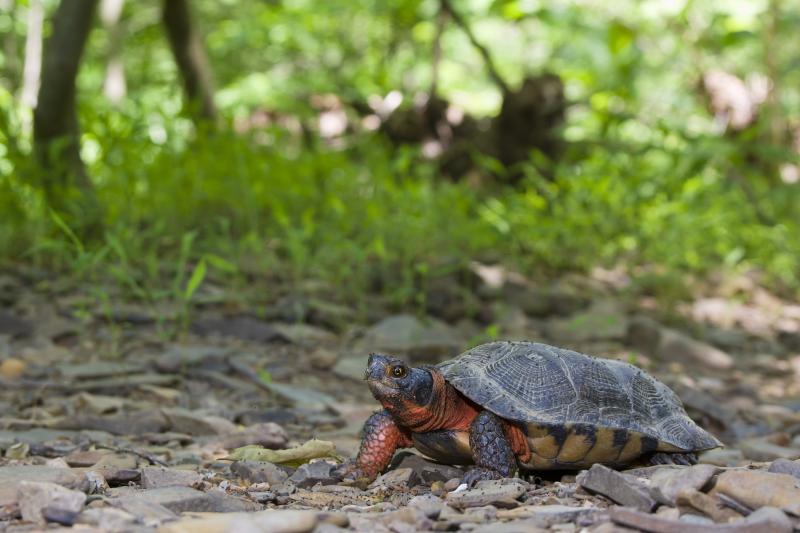 Some wood turtles are accomplished "worm stompers"; turtles stomp the ground with their front feet or the front of their shell, which can cause earthworms to move to the surface. Any worm that surfaces is a meal for the turtle.

Although over 100 occurrences are likely to exist, this species is not typically found in numbers and the size of many of these occurrences is unknown. There are some notable threats (see Conservation and Management section) and the species is state listed as Special Concern.

Long-term data is not available for New York, but wood turtle populations are thought to be declining throughout their range, likely over 50% within the last 100 years (van Dijk and Harding 2011).

There are several conservation strategies that could accomplish better protection and outcomes for wood turtle populations. Wildlife underpasses or culverts combined with roadside fencing could help to reduce road mortality (van Dijk and Harding 2011, Ernst and Lovich 2009). Consideration should be given to wood turtle habitat in land management practices, such as placing a buffer around riparian habitat and raising the height of agricultural mower blades (Saumure et al. 2006). Ideally, mower blade heights should be kept higher than 100 mm from the soil when cropping hayfields, and a buffer of at least 10 meters should be left around the edge, during a first harvest. Buffers should also be created between agricultural fields and suitable riparian habitat to avoid fertilizer and pesticide runoff into streams and rivers (Mitchell et al. 2006). Intense development or disturbance along suitable streams should be avoided. Motorized vehicles, including ATVs, should be restricted from stream channels to avoid siltation, pollution, and disturbance (Mitchell et al. 2006). Enforcing regulations against collection of animals from the wild and reducing the availability of recreation opportunities in areas with large wood turtle populations could reduce the loss of the adults from the population (Garber and Burger 1995). Educating the public on the status of wood turtles and the regulations on collection and harming this species would be beneficial.

Research into New York specific habitat use, population locations, and home range size is needed, as well as population size and monitoring information. Information on population connectivity and barriers to movement would be useful. Research is also needed on how human use patterns impact populations, specifically predation (NatureServe 2017). Other research needs include studies on the male and female reproductive cycles (Ernst and Lovich 2009), and additional measures to minimize accidental mortality.

Wood turtles, while never far from water, utilize a variety of habitats throughout the year. These turtles prefer to spend their time in clear, flowing streams and rivers or in the habitats surrounding them such as woodlands, meadows, and forest edges (Ernst and Lovich 2009). Generally, wood turtles prefer water bodies with hard sand or gravel bottoms, although this varies geographically. Turtles in Virginia and Pennsylvania have been found in streams with clay substrate (NatureServe 2017). One study conducted in Rensselaer Couny, NY found that wood turtles were most often encountered in creeks and floodplains with clear water, and a firm, rocky substrate (Hoffman as cited in Chaloux et al. 2010). Other indicators of suitable habitat were low gradient, little tree cover, vegetative structure in the sides of the creek channel, and areas with diverse ecotones along forest edges. In the eastern portion of their range, these turtles spend less time in water than they do in the west and are more terrestrial during the summer. In central Pennsylvania, wood turtles spend the spring in alder thickets and the summer in hemlock forests foraging for mushrooms (Ernst and Lovich 2009). The study in Rensselaer County had a high encounter rate within open floodplains in and near creeks and wetlands during May and June (Hoffman as cited in Chaloux et al. 2010), while a study in Orange County found that wood turtles migrated farther from the water in the summer. In the winter, wood turtles are found near or within streams that have flowing water all winter, with the exact areas mostly dependent on the habitat structure (NatureServe 2017). They will hibernate on the bank, within roots and branches in streams, among submerged rocks or trees, or along the bottom of the stream. Openings within forested areas where herbaceous plants grow are used for feeding and basking, and nesting occurs in areas with loose substrate in sunny areas such as sandy stream banks or sand-gravel bars within streams. Wood turtles have also been found nesting in man-made nesting habitats, such as gravel pits, open road shoulders, and yards.

This species is found throughout the state with the exception of Long Island.

This large turtle has a black or brown carapace (upper shell) ranging from 5.5 to 8 inches (14-20 cm) in adults (Gibbs et al. 2007). The carapace is somewhat flattened, but highly sculptured with a slight keel. The plastron (lower shell) is mostly yellow with large black blotches along the outer edges and along the bridge. The skin of a wood turtle is dark brown or black with yellow, orange, or red under the chin, throat, tail, and under the forelimbs. Hatchlings average 26.6-34 mm carapace length (CL) (Harding and Bloomer 1979, Lovich et al. 1990) and have a tail that may be as long as the carapace.

The yellow, orange, or red coloration under the chin, throat, tail, and under the forelimbs is a useful characteristic for identification (Gibbs et al. 2007). The highly sculptured shell is also a good diagnostic characteristic.

Adults and juveniles are similar in appearance and can be identified by their coloration and shell shape.

Wood turtles are mostly diurnal, and often enter the water or seek shelter on land under grass, leaves, or brush at night (Ernst and Lovich 2009). These turtles hibernate in the winter between approximately October and March, and may estivate during the warmest days in the summer.

Wood turtles are omnivores; their diet varies seasonally, and consists of invertebrates, plants, fruits, and carrion. Plant material, earthworms, and slugs may be their most important food sources.

In general, the species enters hibernation in early October and leaves by late March (Reilly 1958). The best time to find wood turtles in New York is in the early spring when wood turtles spend their time in and along creeks (Chaloux et al. 2010).

The time of year you would expect to find Wood Turtle present, active, and reproducing in New York. 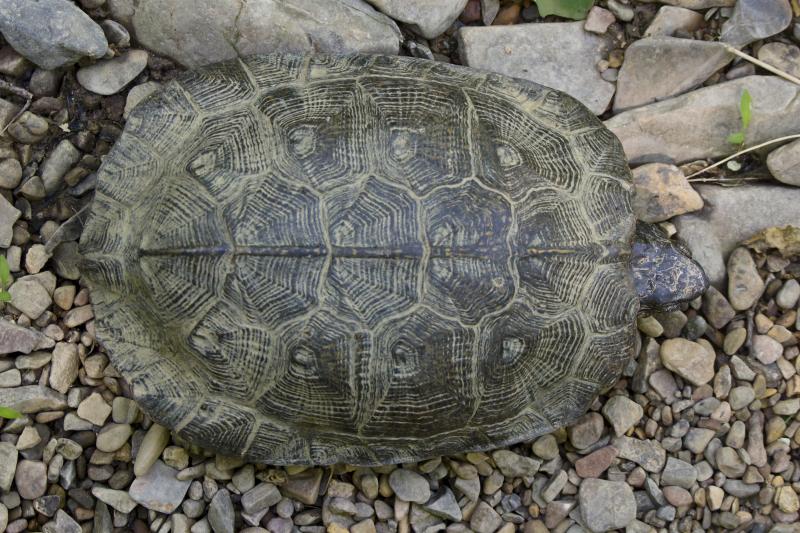 Information for this guide was last updated on: September 25, 2019