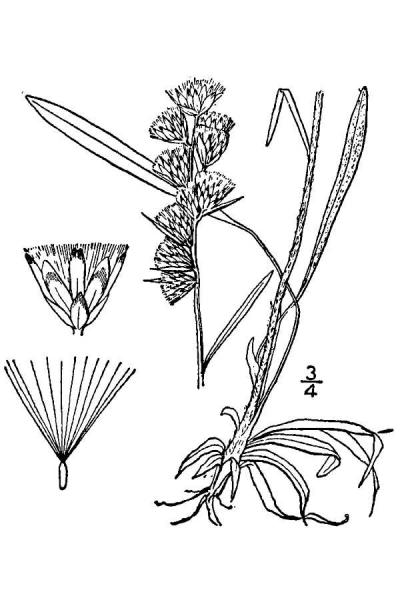 This species has been found only once in New York but more occurrences could probably be found in the Adirondacks if more searches are done.

There are two existing populations with hundreds of plants each and no other historical populations.

In the United Kingdom, where approximately one-quarter of the world's population of this plant are reported, researchers estimate this plant has declined by about 50% in the last 25 years (Edinburgh Biodiversity Partnership). With only a few known and historical New York populations, assessing the trend here is very difficult. More information on historical distribution and current known populations are needed before a trends assessment can be evaluated.

We have no historical records of this plant. The first specimen from New York was collected in 1989. A second population was discovered in 2003, although this second population may be considered adventive. More information is needed on possible older records in New York before the long-term trends can be assessed. We speculate that this plant was always rare in New York.

This plant may be threatened by liming of soils, changes to land management, and succession. This is a disturbance-dependent species with one population growing in an area that receives periodic mowing and changes to the current mowing pattern could reduce the population. More research is needed to fully assess the threats of this plant.

As a plant of early successional sites and natural disturbances, natural openings or even soil scrapes may be necessary for the persistence of this plant. Retain the current mowing pattern and avoid the use of herbicides, pesticides, and/or fertilizer where the plants grow.

There are currently only two populations. The first is located along a logging road in the Adirondacks (Herkimer County) and the second is located within Letchworth State Park in Wyoming County. There are no other known historical records.

Wioodland Cudweed is a northern species found in the the northern tier of US states from Wisconsin east, south of Pennsylvanaia, and extending from Ontario to the Maritime Provinces in Canada. It may represent an introduced population of a closely related, circumboreal species of Omalotheca.

Omalotheca sylvatica is a native perennial herb of the aster family, growing to 10-70 cm in height with a silvery-silky hairy covering much of its leaves. The late-appearing basal leaves are 2-10 mm wide with a single mid-rib. As with all asters, the infloresences are arranged radially into "heads" of many separate ray and disc flowers, superficially resembling a single flower. The flowering stems are stiffly erect with numerous linear, ascending leaves. The inflorescence is an elongated leafy stem with 10 to many flowering heads in an interrupted, loose spike from 4 to 35 cm tall. The whorls of bracts (involucres) subtending the flowering heads are 5 to 6.5 mm long. The individual bracts (phyllaries) are light straw-colored or greenish at the base with a conspicuous V-shaped dark brown spot located just below the thin, membranous, translucent (hyaline) tips. The fruits are covered with appressed bristle-like hairs. The tuft of bristly hairs (pappus) present on the fruit are fused together at their base (connate), and fall off as a unit.

Omalotheca sylvatica is a native perennial herb growing to 10-70 cm in height with silvery-silky hairs covering the lower (abaxial) surfaces of its leaves. The late-appearing basal leaves are 2-10 mm wide with a single mid-rib. The flowering stems are stiffly erect with numerous linear, ascending leaves. The inflorescence is an elongated leafy stem with 10 to many flowering heads in an interrupted, loose spike configuration 4 to 35 cm high and occupying 1/3 to 5/6 of the entire height of the plant. The whorl of bracts subtending the flowering heads (involucres) is 5 to 6.5 mm long, rounded to obtuse, the individual bracts (phyllaries) are light straw-colored or greenish at the base with a conspicuous V-shaped dark brown spot located just below the thin, membranous, translucent (hyaline) tip. The fruits (cypselae) are cylindric to spindle-shaped and covered with minute appressed, rigid, bristle-like, straight hairs. The tuft of bristly hairs (pappus) present on the fruit are fused together at their base (connate), and fall off as a unit.

For positive idenitification the entire plant with leaves and intact flowers or fruits is needed.

Omalotheca sylvatica is the only Omalotheca found in New York. The closely-related genera Gnaphalium and Pseudognaphalium have only annual or biennial species in New York and can be distinguished by their lack of a persisent, horizontally growing underground stem (rhizome). O. supina, an alpine species known from high elevations in northern New England, is typically a smaller plant overall, and its pappus bristles are not connate.

This plant typically flowers from July to September. Fruiting typically begins in late August with both the plants and fruits persisting through the early frost.

The time of year you would expect to find Woodland Arctic Cudweed vegetative, flowering, and fruiting in New York.