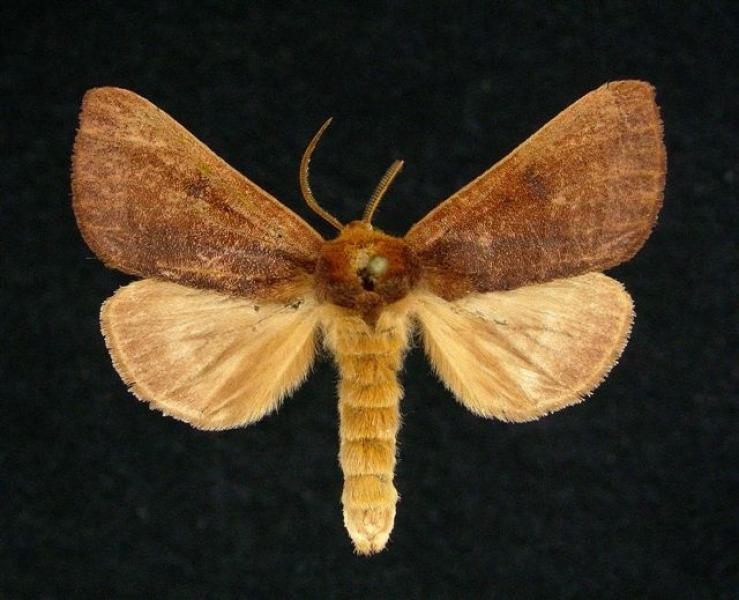 Larvae of this species can become abundant after fires, which produce sprouts of larval foodplants, on which larvae prefer to feed. In New Jersey, this species produced a massive outbreak that started the first summer after the July 1983 Atsion fire and peaked two years after the fire (NatureServe 2010).

There is only one documented population in New York State, but the species could be more widespread. It feeds mostly on sprouts of stagger-bush (Lyonia mariana). There is a pre-1950 historical record from "Bear Mountains" based on a specimen at Cornell University. However, now the species seems to be confined to Long Island and its vicinity. Additional surveys are needed to determine its status and distribution.

The short-term trend for the species in New York State seems to be stable. At the one documented population in the state, the numbers of larvae that were observed during surveys in 1989 and 1991 were stable. The population is in a protected area.

Elimination and fragmentation of habitat by commercial and residential development are threats to the species. In addition, since larvae of the species usually are found in very open habitats and most often on sprouts, the species apparently requires recurrent fires or mowing to persist in its coastal plain habitats, and fire suppression and allowing natural succession would decrease the amount of suitable habitat for the species. Forestry practices that result in closed canopy pine stands or destruction of understory would severely impact the species. Application of the insecticide Dimilin would cause very high mortality of larvae for the rest of the season (NatureServe 2010).

In New Jersey, this is primarily a species of recently burned pitch pine lowlands, and larvae can be abundant after wildfires. Since the larvae usually are found in very open habitats and most often on sprouts, the species apparently requires recurrent fires or mowing to persist in its coastal plain habitats. Generally prescribed burning would be the preferred management for habitats other than right of ways. Prescribed burning at any season should be beneficial where the pine canopy is sparse but probably irrelevant in shaded woods if the understory is burned without canopy thinning. In New Jersey and North Carolina the species often occurs with rarer species with similar management needs. Decreasing wildfire frequency has substantially reduced the habitat in New Jersey since the 1960s and since light winter prescribed burns there do not affect the increasingly dense canopy, this and most other specialized barrens species probably do not benefit. Since pupae are underground and some overwinter twice, the species should not be seriously impacted in the long term by mortality even from summer fires, which would kill eggs, larvae, and adults, unless these occurred very frequently. Forestry practices that result in closed canopy pine stands or destruction of understory would severely impact the species, although it could be present initially in young plantings where there is native understory. Timber harvest should be beneficial in places with dense pine canopy (NatureServe 2010). In addition to habitat management, restricting dirt bike and ATV use in occupied areas would be beneficial. Spongy moth outbreaks are not likely to be a factor in coastal plain habitats of the species since these habitats usually do not have many oaks or other highly susceptible trees, but few larvae would be exposed to typical BTK applications aimed at that pest which would be made well before eggs are laid. Use of Dimilin would cause very high mortality of larvae for the rest of the season (NatureServe 2010).

Additional research is needed to resolve the taxonomy and distribution of the species. Additional inventory and monitoring is also needed. Last instar larvae are very easy to identify. In New York State, the species is best sought as larvae on the main larval foodplant, stagger-bush (Lyonia mariana), in July.

In the coastal plain of Long Island, New Jersey, and North Carolina, the normal habitat is open mesic or less often xeric pinelands especially for the first few years after wildfires. In New Jersey a population occurs on regularly winter-mowed low shrubland in an airport approach zone. The habitat is unclear in the mountains, but the Virginia specimen was collected in a hardwood-hemlock mix in a ravine. The Pennsylvania specimen was collected in a frequently burned shrubland-grassland-woodland mix. In New Jersey the species does not occur in closed canopy forests even where the foodplants are common. This is probably true in other coastal areas. It is not unusual to find larvae on mowed roadside sprouts in the New Jersey Pine Barrens (NatureServe 2010). In New York State, the species has been documented in a degraded remnant of a Hempstead Plains grassland.

The species is probably confined to Long Island and vicinity, but there is an old specimen from "Bear Mountains."

This is primarily a species of coastal plain pinelands of Long Island, New York, southern New Jersey, and southeastern Virginia to Florida, but Forbes (1948) also reports Arkansas and Delaware Water Gap, Pennsylvania. The USDA Plant Profile for the foodplant shows it absent on most of the Gulf Coast but present widely in Arkansas and more spottily in neighboring states. There is very little habitat in Maryland or Delaware and so far the species is not confirmed for Georgia. Unless there is an unrecognized species involved, the species also occurs in the mountains since recent single specimens from Montgomery County, Virginia (DFS) and Fort Indiantown Gap, Pennsylvania (Betsy Ray, PNDI, determination by Dale F. Schweitzer) could be no other known species (NatureServe 2010). Wagner (2005) reports that the species distribution extends from Pennsylvania to Long Island, south along the Coastal Plain and southern Appalachians to eastern Texas.

This is a heavily frosted grayish or dark reddish Datana with yellow-striped larvae on heaths (NatureServe 2010).

This is a medium-sized, stout-bodied, heavily frosted grayish or dark reddish moth with a wingspan of approximately 42 mm. In New Jersey, Datana ranaeceps is the only species that exhibits the reddish form. However, since the reddish form is also common in Datana major (Grote and Robinson) southward, specimens from south of New Jersey must be verified by genitalia (Forbes 1948). Species in the genus Datana are much easier to identify from specimens or photos of last instar larvae than from adults. Forbes (1948) provides an excellent key to larvae, and Wagner et al. (1997) and Wagner (2005) are also useful for identifying larvae. Larvae must be in the last instar to be identified, and the last instar larvae can be recognized by the combination of normal continuous yellow stripes, red head, red posterior end, and presence on a larval foodplant. Most larvae of the species are brighter than the one illustrated by Wagner (2005), which is probably close to pupation. The species is similar enough to other species of Datana that some records in the literature may not be trustworthy. Specimens are sometimes misidentified even in modern collections (NatureServe 2010).

Larval characteristics most useful for identification are the combination of continuous yellow stripes, red head, red posterior end, and presence on a larval foodplant (NatureServe 2010).

The last instar larval stage is the best life stage for identification (NatureServe 2010).

Adults are nocturnal. In the North, the species often exhibits a partial second generation each year, and in the South, there are two broods each year (Wagner 2005). In New Jersey, adults occur from mid-May into August, mainly from one drawn-out emergence. Some early-emerging adults in May lay eggs that hatch into larvae, which pupate and eclose in early August without overwintering. Eggs hatch in ten days or less, and the larval stage lasts only about a month. Larvae are usually noticed in New Jersey from late June to mid-August. Pupae occur underground, and some overwinter twice (NatureServe 2010).

The normal larval foodplant in New Jersey and Long Island, New York, is the shrub stagger-bush (Lyonia mariana). Some larvae will also feed on fetter-bush (Leucothoe racemosa), blueberries, and probably maleberry (Lyonia ligustrina) when displaced, but probably only as last instars. Most will not accept the Leucothoe. Records of "Andromeda" refer to Lyonia. In New Jersey the larvae are found mostly on sprouts following fires or mowing, but they can be found on more mature Lyonia in very sterile, open, sunny habitats. The foodplants for populations in the mountains are unknown. The adults do not feed.

The best time to see the species is during its larval stage. In New York State, larvae have been observed in July, with peak numbers observed in mid-July.

The time of year you would expect to find A Hand-maid Moth present, reproducing, and larvae present and active in New York.

Careful rearings should be conducted to verify that this is a single species. In particular, the few seen from the Appalachians (at least central Pennsylvania and Virginia) look a little different and occupy a very different habitat. Dark red forms are always this species in southern New Jersey, but in eastern North Carolina, most appear to be Datana major. Coastal plain specimens at least from north of Florida show little geographic variation.