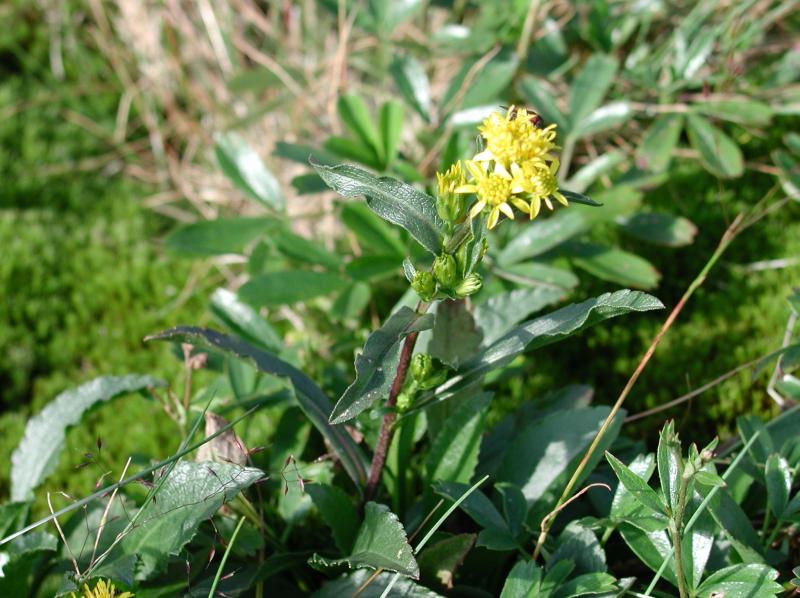 Alpine goldenrod is endemic to northeastern North America. It only occurs in alpine habitats from Quebec through northern New England and New York. The species name refers to smooth (leio) fruit (carpa) but the fruit are actually hairy.

There are 13 known extant populations. There are also two historical populations which have not been seen for over 100 years. Still, more survey work is needed at these two sites to determine if the plants are still there. All the populations are restricted to very limited habitat in the relatively small area of the high peaks region of the Adirondacks. At least 10 of the populations are partially threatened by trampling from hiker traffic.

Most populations are threatened by trampling and erosion caused by hiker traffic but the extent of the damage is unknown. Part of one population is threatened by roadside disturbances.

One of the populations is threatened by road disturbances. All road work near this population needs to be done without damaging the population. Therefore, communication with the group responsible for maintaining this road is needed.

The two historical populations need further survey work to assess their condition. Consistent and regular estimates of population sizes are needed for all populations.

In New York, this species is restricted to a few of the highest summits in the high peaks region of the Adirondacks. It grows in alpine meadows, often with abundant exposed bedrock, and sometimes surrounded by krummholz and spruce-fir forests (New York Natural heritage Program 2007). Alpine habitats (Semple and Brooks 2006).

In New York, this species is limited to a few of the highest summits and a few slightly lower cliffs in the high peaks region of the Adirondacks.

This species is limited to alpine regions from Quebec south through northern New England and New York.

Alpine goldenrod is a small perennial herb of alpine areas. It is related and somewhat similar to other more widespread goldenrod species. There are one to five, 2 to 14 inch tall stems arising from the base of the plants. There are leaves at the base of the plants and a few scattered along the stems. The lower leaves are .8 to 6 inches long and have rounded teeth along their edges, while the upper leaves are .8 to 1.5 inches long and entire. The flowers occur in dense clusters or heads. There are about 2 to 50 (although sometimes as many as 160) heads per plant. The flowers are yellow. Like those of dandelions, the mature fruits have capillary hairs that aid in dispersal (Semple and Cook 2006).

Solidago leiocarpa is often very small but it can grow up to 35 cm tall. The basal rosettes are usually withered when the plant is in flower. There are 2-7(-15) leaves on the stems, below the inflorescences. The lower and basal leaves have blades that taper into a petiole. The blades of these leaves are spatulate to oblanceolate, acute to rounded at the apices, glabrous, and crenate to serrate. The upper leaves are sessile, oblanceolate, glabrous, and entire. The inflorescences are corymbiform in small plants and corymbiform to paniculiform in larger plants. There are 2-50(-160) flowers per head. The involucres are 5.0-7.5 mm long and the fruits (cypselae) are 1.0-2.5 mm long (Fernald 1970, Semple and Cook 2006).

It is easiest to identify this plant when it is in flower but it can be identified adequately when it is in fruit. If collections are made, the entire stem should be collected including the lowermost leaves, and if possible, the roots.

Although some goldenrods are superficially similar, S. leiocarpa is quite distinct. The usually corymbiform inflorescences, basal leaves withering by flowering time, and 30-50(-160) flowers per head should distinguish this species from all others.

Solidago randii grows on exposed cliffs and ledges below the alpine zone but can occasionally grow fairly close to populations of S. leiocarpa. Solidago randii can be distinguished by basal leaves present at flowering time, racemiform to paniculiform inflorescences, and resinous leaves (often) and involucres.

Solidago macrophylla is common in cool forests but can occasionaly get into the alpine zone. It can be distinguished by being taller (20-105 cm tall), sometimes having basal leaves persistent at flowering time, having lower leaves acute to acuminate tipped, involucres (8.6-)9.5-11.5(-12.5) mm long, and fruits (cypselae) 1.4-4.0 mm long.

This species starts to flower in mid to late July or rarely in the first half of July and the flowers persist through late August or very early September. Therefore, the best time to survey for this species is from late July through August.

The time of year you would expect to find Alpine Goldenrod vegetative, flowering, and fruiting in New York. 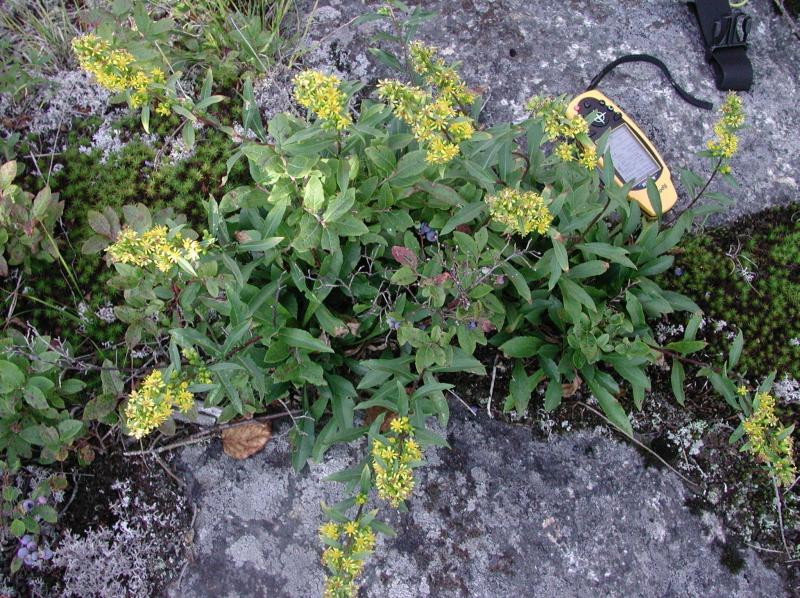