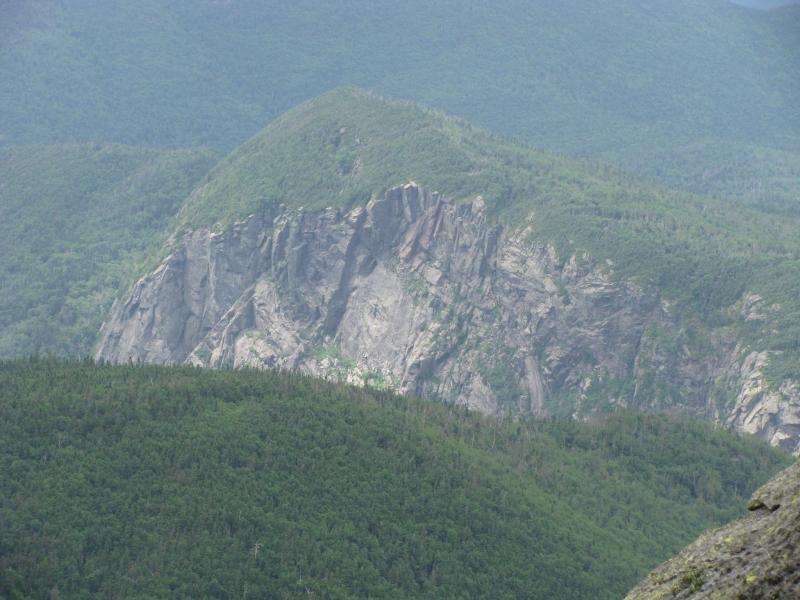 Cliff communities can harbor some of the oldest trees in the state. Because of the inaccessible nature of cliffs, the vegetation at these sites is often left undisturbed. In addition, the trees that reside on cliffs grow under stressful conditions, including drought, high wind, and low nutrient availability, often making them stunted, knobby, and undesirable for commercial lumber. The small size of these trees can be deceiving. Studies of the Niagara Escarpment, which extends from New York into Ontario, Canada, have found northern white cedar trees (Thuja occidentalis) that are 500 to 1000 years old.

There are several thousand occurrences statewide. Some documented occurrences have good viability and many are protected on public land or private conservation land. This community is limited to areas of the state with acidic bedrock outcrops that are sufficiently high and steep. Although most examples are relatively small, there are several large, high quality examples in New York. The current trend of this community is probably stable for occurrences on public land, or declining slightly elsewhere due to moderate threats that include mineral extraction, recreational overuse, and invasive species.

The number and acreage of cliff communities in New York have probably declined slightly in recent decades as a result of mineral extraction and other development.

The number and acreage of cliff communities in New York have probably declined moderately from historical numbers as a result of mineral extraction and other development.

Where practical establish and maintain a natural forested buffer to reduce storm-water, pollution, and nutrient run-off, while simultaneously capturing sediments before they reach the cliff face. Avoid habitat alteration along the cliff and surrounding landscape. Restore past impacts (e.g., mining). Prevent the spread of invasive exotic species onto the cliff through appropriate direct management, and by minimizing potential dispersal corridors, such as trails and utility ROWs. Monitor rock climbing activity and develop a management plan for sites where recreational overuse is a concern.

A natural (usually forested) buffer around the cliff face will help it maintain the characteristics that make it unique. It may be desirable to close portions of cliffs for various durations in order to protect rare cliff nesting birds and rare plant habitat.

Research the age of the trees growing on cliffs. Collect sufficient plot data to support the recognition of several distinct cliff types based on composition (e.g., bryophytes) and physical characteristics. The current classification encompasses a wide range of bedrock from pure acidic (e.g., granite, gneiss) to circumneutral bedrock (e.g., amphibolite, schist). Entire cliffs or portions of cliffs can be further classified along a moisture gradient (e.g., dry, moist, wet). These types may correspond to ecoregional distribution, specific geology, and/or local hydrology.

Cliff communities are widespread throughout upstate New York, north of the North Atlantic Coast Ecoregion, where the bedrock is non-calcareous. This community is currently known from the Central High Allegheny Plateau, the Catskill Mountains, and the Hudson Highlands. Numerous cliffs are also known from the Central Adirondack Mountains and Eastern Adirondack Low Mountains (Lake George Valley). Additional occurrences may be located elsewhere in the state where similar environmental conditions exist.

This physically broadly-defined community may be worldwide, where the bedrock is not calcareous. Examples with the greatest biotic affinities to New York occurrences are suspected to span north to southern Canada, west to Minnesota, south to Indiana and Tennessee, southeast to Georgia and northeast to Nova Scotia.

A community that occurs on vertical exposures of resistant, non-calcareous bedrock (such as quartzite, sandstone, or schist) or consolidated material; these cliffs often include ledges and small areas of talus. There is minimal soil development, and vegetation is usually sparse. Plant species present are somewhat dependent on the microclimate conditions, which can range from shady and moist to sun-exposed and dry. Vegetation often inhabits shallow pockets of soil that accumulate on ledges, and in cracks and crevices within the cliff wall.

Impressively large cliffs can be viewed from afar year-round. Many natural areas across the state have cliffs that provide excellent scenic vantage points from which to observe the landscape from above. Late spring to early summer is the best time to see early blooming cliff-dwelling wildflowers. 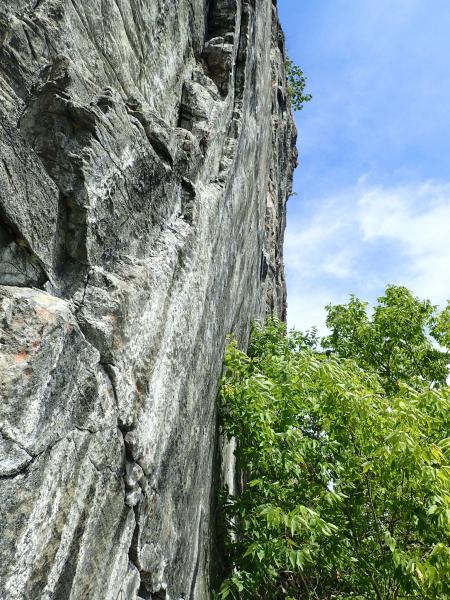 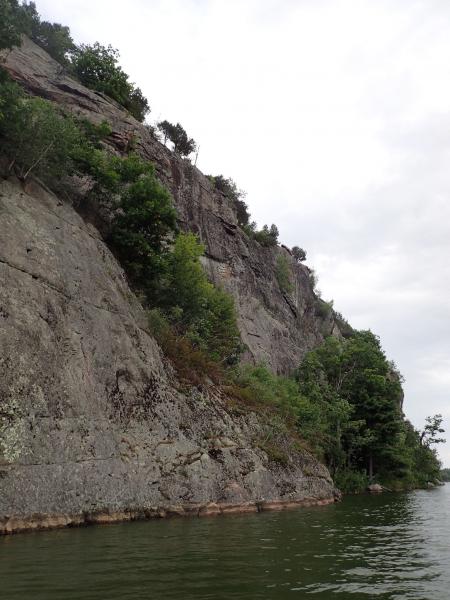 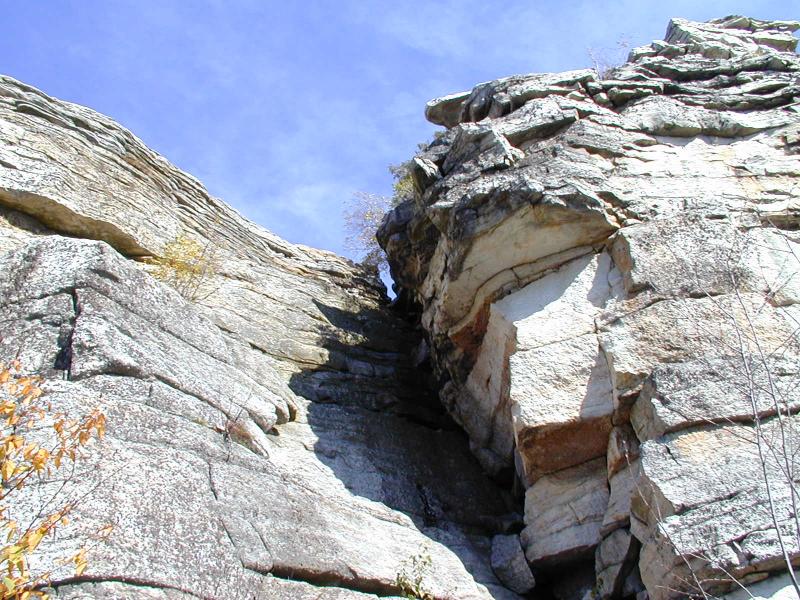 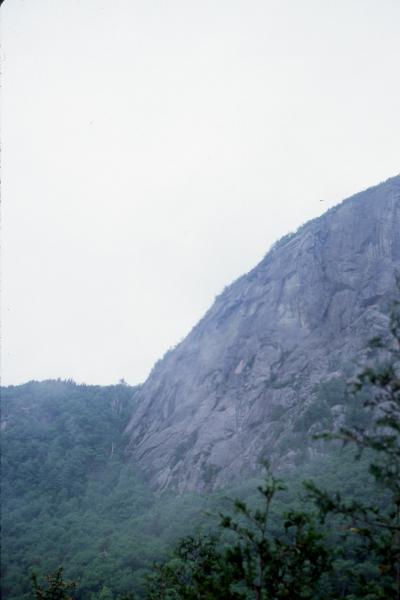 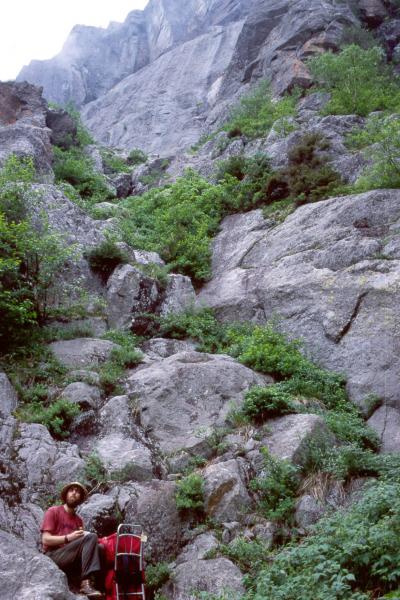 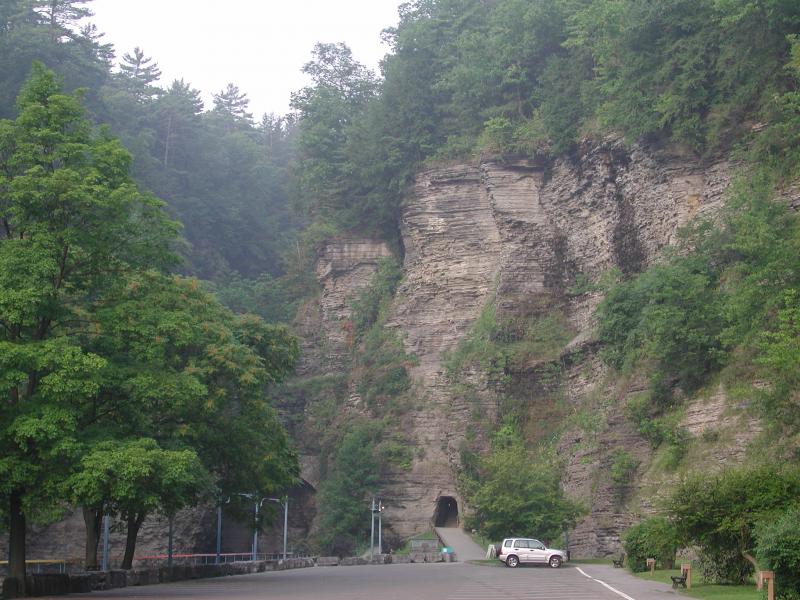 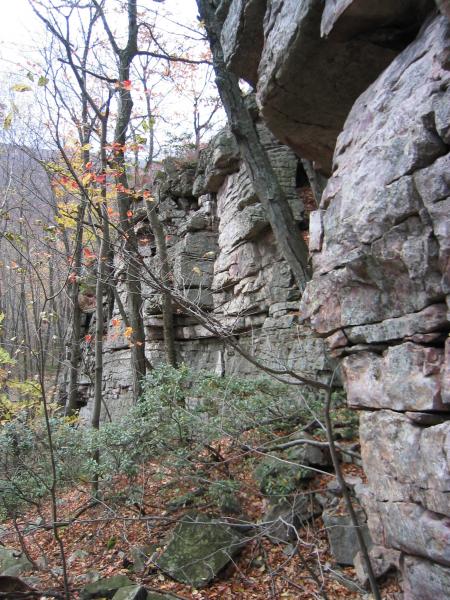 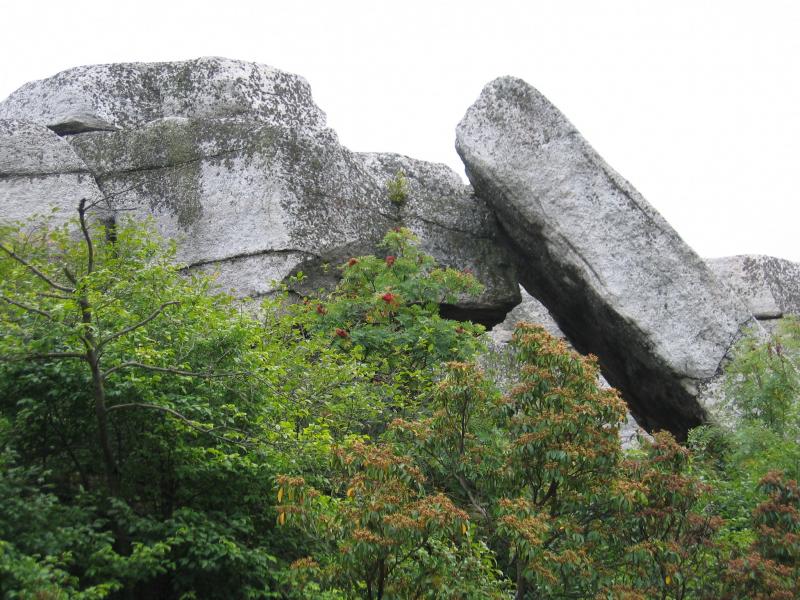 This figure helps visualize the structure and "look" or "feel" of a typical Cliff Community. Each bar represents the amount of "coverage" for all the species growing at that height. Because layers overlap (shrubs may grow under trees, for example), the shaded regions can add up to more than 100%.