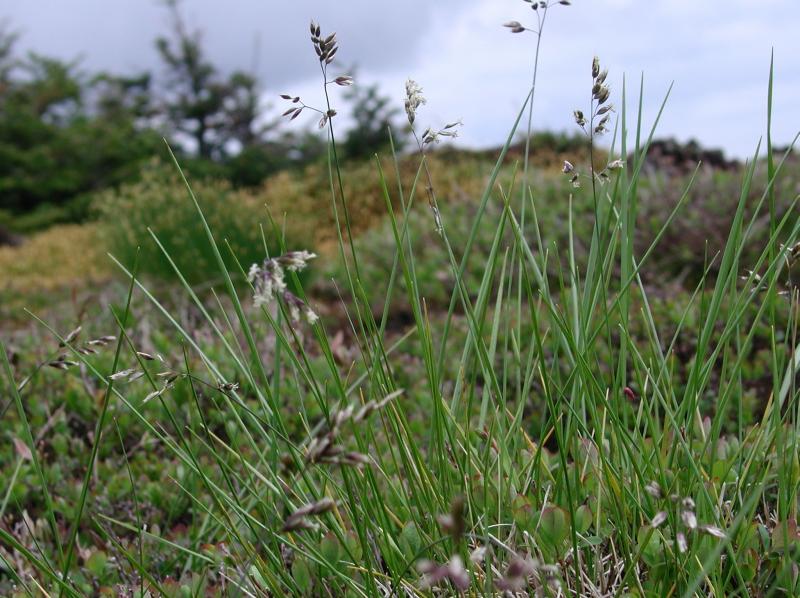 State Conservation Status Rank
S2
Imperiled in New York - Very vulnerable to disappearing from New York due to rarity or other factors; typically 6 to 20 populations or locations in New York, very few individuals, very restricted range, few remaining acres (or miles of stream), and/or steep declines.
Global Conservation Status Rank
G5T3T5
Vulnerable globally, or Secure - Conservation status of the subspecies/variety is uncertain, and could range from moderate risk of extinction due to rarity or other factors, to uncommon, to common globally. More information is needed to assign either T3, T4 or T5. (The species as a whole is common globally.)

Alpine sweet grass, like its close relatives indian sweet grass (Anthoxanthum hirtum and A. nitens) and sweet vernal grass (A. odoratum) has a sweet fragrance when cut, which is a result of the presence of coumarine. This aromatic organic compound also produces the fragrance of fresh-cut hay, and is used in perfumes.

There are eight known extant populations and about half of these have fewer than 100 plants.

Four of the eight extant populations were first discovered in the past 30 years. These populations were probably overlooked in the past and do not represent new populations. One population which was first seen in 1997 was not seen during a recent survey, but exact locality information is unknown. More survey work is needed to see if this population is still extant. The two populations where trampling is a threat have probably declined slightly, although no data are available. Overall, short-term trends are unclear but may indicate at least a small decline.

No populations are known to have become extirpated in the past 100+ years. Half of the populations are small with under 100 individuals. Overall, long-term trends are unknown.

In New York, this species is restricted to a few of the highest summits in the Adirondacks as well as one slightly lower, massive, exposed cliff face. These sites are alpine meadows often on very thin soil with extensive exposed bedrock (New York Natural Heritage Program 2007). Open, alpine areas (Haines and Vining 1998). For Anthoxanthum monticola sensu lato: circumboreal in arctic and alpine meadows, south to alpine summits (Gleason and Cronquist 1991). Subspecies alpinum (which does not occur in New York) occurs as a rule above or north of the tree line, more exceptionally in open forests. It grows usually in places strongly exposed to wind and with little snow-cover during the winter, where the vegetation cover is not closed. Subspecies monticolum can occur in biotopes of about the same character as for ssp. alpinum but also, and more typically, in wetter places less exposed to wind and with a more closed vegetative cover (Weimarck 1971).

This species is limited to a few of the highest peaks in the high peaks region of the Adirondacks. New York is at the southern edge of its range.

Anthoxanthum monticola ssp. monticola grows from Greenland to the east side of the Hudson Bay in Quebec and south to Newfoundland and the high mountains of Northern New England and New York (Allred and Barkworth 2007). According to Weimarck (1971), there are some specimens from eastern Russia and Alaska that might fit the concept of this taxon. Anthoxanthum monticola ssp. alpinum is circumpolar, occuring in Europe, Asia, and North America. In eastern North America it gets only as far south as Quebec and Labrador (Weimarck 1971).

Alpine sweetgrass is a loosely tufted or slightly creeping perennial grass. The base of the plants are deep purple to brown. The stems are 5 -30 inches tall. Most of the leaves are at the base of the stems but one (or sometimes two) extend further up the stem. The leaf blades arising from the base of the plants are 4 to 6 inches long, and folded. An inflorescence about 1 to 3 inches long terminates the stem. The small inconspicuous flowers occur in groups of three, in a structure called a spikelet. The lower two flowers of a spikelet are male only and produce 2 awns which stick out of the top of the spikelet, while the upper flower is bisexual and without an awn (Sorensen 1954, Weimarck 1971).

This species is loosely cespitose to short creeping with rhizomes up to 2 cm long. The basal leaves have deep purple to brown sheaths while the blades are serrulate margined, glabrous and shiny abaxially, and pilose adaxially. The culms (including the panicles) are (20-)35-60(-75) cm tall. The cauline leaves are long sheathing with blades (8-)12-25(-48) mm long. The panicles are (25-)35-70 mm long with one to two panicle branches at each node. The spikelets have three florets. The lower two are staminate and the upper is bisexual. The glumes are glabrous, hyaline, and goldish. The lemmas are usually awned but vary considerably in length. The awn on the upper staminate lemma is 4.5-7.0 mm long, attached above the middle, not or only slightly twisted, and straight or slightly geniculate (Sorensen 1954, Weimarck 1971, Allred and Barkworth 2007).

This species is very distinctive when in flower or fruit and should not easily be confused with any other grass. The hyaline glumes give a distinctive look to the panicle. The combination of three florets per spikelet, lower two florets staminate, lemmas of lower two florets long awned, and less than 30(-35) spikelets per panicle separates this species from others, especially in alpine or sub-alpine areas.

This species can start to flower in mid-June and fruits persist through August. Therefore, the best time to survey for this species is late June through mid-August.

The time of year you would expect to find Alpine Sweetgrass flowering and fruiting in New York.

Schouten and Veldkamp (1985) combine the genera Anthoxanthum and Hierochloe under Anthoxanthum because in a world wide analysis of the two genera they found many intermediates between the two genera and no tenable way of separating them. Some recent authors (Tucker 1996, Soreng et al. 2003, Allred and Barkworth 2007) follow this decision while others (Gleason and Cronquist 1991, Stace 1997, Weakley 2006) do not. Anthoxanthum monticola ssp. monticola was first described as Holcus monticola Bigelow in 1816 with the type from Mt. Washington, New Hampshire. Sorensen (1954) named a different taxon Hierochloe orthantha in 1954 with the type from Greenland. He indicates that his Hierochloe orthantha occurs in northeastern North America from Greenland south to the mountains of northern New England and New York including the White Mountains of New Hampshire. He does not mention Holcus monticola in his article. Love and Solbrig (1964) published the name Hierochloe monticola (Bigelow) Love & Love based on the basionym Holcus monticola with Sorensen's Hierochloe orthantha placed in synonymy. Hierochloe monticola (Bigelow) Love & Love is a nom. illeg. because it had already been used for another taxon. When Schouten and Veldkamp (1985) lumped Hierochloe with Anthoxanthum they used the combination Anthoxanthum monticola (Bigelow) Veldkamp for both of these taxa (Hierochloe orthantha and Holcus monticola) as well as the closely related Holcus alpinus. They used the orthographic variant A. monticolum but the specific epithet monticola is not an adjective and should not change. The closely related taxon mentioned above, Holcus alpinus Sw. ex Willd., was originally described in 1806 with the type from Lapland. It was transferred to Hierochloe alpina (Sw. ex Willd.) Roem. & Schult. in 1817. As mentioned above, when it was transferred to Anthoxanthum by Schouten and Veldkamp (1985)

Schouten, Y. and J.F. Veldkamp. 1985. A revision of Anthoxanthum including Hierochloe Gramineae in Malesia and Thailand. Blumea 30: 319-352.