In the 1960s all American azures were considered to be the same species. However, more recent research and collecting uncovered variation in specimens and foodplants determining that they were actually many species. Several common species have only been recognized since the late 1990s and more could be uncovered. New York has at least four species of Azures.

This species has a very limited range in New York and appears to be scarce and local within it. Its habitat is generally threatened by deer and invasive plants, even where protected from development. There is some uncertainty as to the actual number of remaining colonies and more inventory and in some cases better documentation is needed, but there are likely to be between two and 20 populations in the state presently. It is expected that at least a few of these populations would have good prospects for persistence.

The long-term trend indicates a moderate to large decline (25 % to 90%) in the population.

The major threats are from development, which leads to habitat loss and alteration. Habitat fragmentation could be a serious issue since apparently this species is quite scarce (Glassberg 1993). In most areas, occupied habitats are probably too separated to allow much movement between patches. Besides development, invasive understory plants that can displace the foodplant, Black Cohosh (Actaea racemosa), are a serious threat. Deer are a potential threat, but may not impact the foodplant as severely as they do to some other understory flora. Deer potentially could eradicate a population virtually overnight by consuming the flowers of the foodplant and any eggs or larvae on them. More information is needed on this threat. Spongy moth (Lymantria dispar) spraying could be a threat depending on timing and whether or not the larvae would be sensitive to Btk (Bacillus thuringiensis var. kurstaki - a bacterial biological control used on spongy moths) applications. Harvest of the foodplant for alleged medicinal properties is a potential threat.

Managing invasive understory plants like garlic mustard might be considered. If deer threaten the flowers of the foodplant, Black Cohosh (Actaea racemosa), then immediate action would needed to prevent this. In this scenario, a delay in action of just a few days could easily lead to loss of the population.

The most important need is to assess the degree of threat posed to the foodplant, Black Cohosh (Actaea racemosa), by deer and invasive plants. Deer consumption of the flowers or young fruit, and larvae on them, would be the issue. Also, identification of historical specimens need to be reverified to more precisely determine the distribution of this species.

The habitat is rich deciduous forest with the foodplant, Black Cohosh (Actaea racemosa) in the understory. Aside from sufficient foodplants, no other habitat needs are known.

This species occurs in the New York City area and has been reported as far north as Albany County. The current range in New York is somewhat uncertain due to unverified reports. The range of this butterfly is probably somewhat more restricted than the range of its foodplant, Black Cohosh (Actaea racemosa).

This species occurs mostly in the mountains and piedmont from southeastern New York and western Connecticut to northern Georgia and west into the Ohio Valley. It is also found in southern Missouri.

This could be very difficult or sometimes even impossible to identify from photographs since photographs may not convey size. Given the scarcity of the species, more than a single specimen should not be collected. In most cases collecting at least one male specimen should be strongly considered for newly discovered populations. Otherwise, several individuals should be photographed with a size reference included in the photographs. The adults are generally larger than other azures and are pale with reduced markings beneath, although summer azures could be very similar. A concentration of large pale azures in the vicinity of black cohosh in late May or early June would probably be Appalachian Azures. Summer Azure (Celastrina neglecta) larvae sometimes turn up on this foodplant, so the mere presence of Celastrina larvae on Black Cohosh (Actaea racemosa) is insufficient documentation.

The adults are generally larger than other azures and are pale with reduced markings beneath, although summer azures could be very similar. A concentration of large pale azures in the vicinity of Black Cohosh in late May or early June would probably be Appalachian Azures. The flight season is a good clue for identification, as adults found in July or later are not Appalachian Azures.

The identification should be based on an adult specimen if possible. Larvae in June probably cannot be reliably identified, due to possible occurrence of the Summer Azure (Celastrina neglecta) on the same foodplant.

This is a localized forest understory azure found near Black Cohosh (Actaea racemosa).

The larvae feed on flowers and developing fruit of Black Cohosh (Actaea racemosa) only. The adults probably take nectar from other plants.

There is one brood with adults present in approximately mid or late May to mid-June. A few larvae may be present into July. Most of the year is spent as pupae in the leaf litter or humus layer.

The time of year you would expect to find Appalachian Azure reproducing, larvae present and active, and pupae or prepupae present in New York. 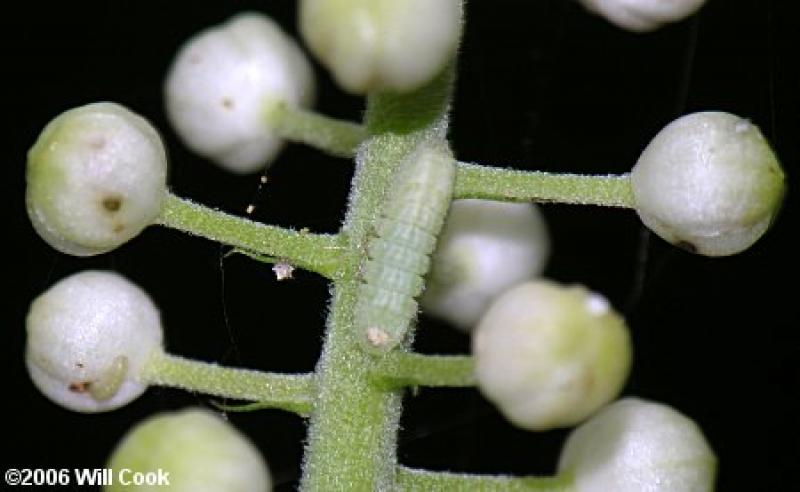 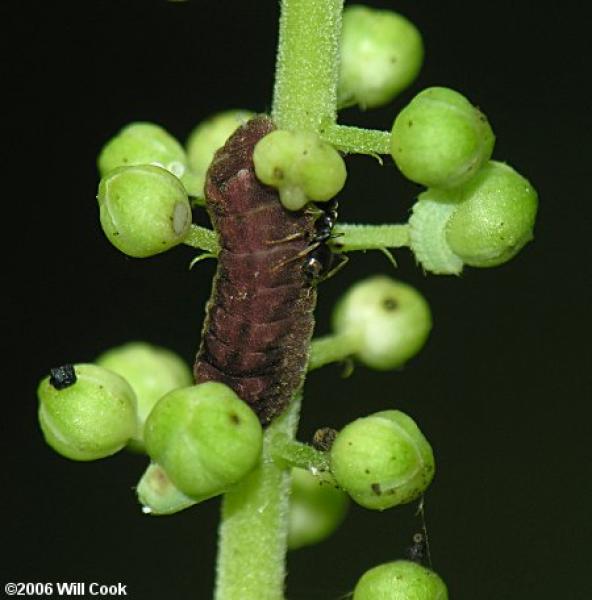