The New York Natural Heritage Program considers Appalachian oak-hickory forests "matrix forests." Matrix forests blanket large regions of the state and include patches of other natural communities. If the High Allegheny Plateau along the New York-Pennsylvania line were thought of as a giant chocolate chip cookie, then Appalachian oak-hickory forests would be the cookie dough and the chips would be the other embedded communities such as lakes, bogs, and swamps.

There are several hundred occurrences statewide. Some documented occurrences have good viability and many are protected on public land or private conservation land. This community has statewide distribution and includes several very large, high quality examples. The current trend of this community is probably stable for occurrences on public land, or declining slightly elsewhere due to moderate threats related to development pressure.

The number and acreage of Appalachian oak-hickory forests in New York has probably declined moderately in recent decades as a result of logging, agriculture, and other development.

The number and acreage of Appalachian oak-hickory forests in New York has probably declined substantially from historical numbers likely correlated with past logging, agriculture, and other development.

Threats to forests in general include changes in land use (e.g., clearing for development), forest fragmentation (e.g., roads), and invasive species (e.g., insects, diseases, and plants). Other threats may include over-browsing by deer, fire suppression, and air pollution (e.g., ozone and acidic deposition). When occurring as expansive forests, the largest threat to the integrity of Appalachian oak-hickory forests are activities that fragment the forest into smaller pieces. These activities, such as road building and other development, restrict the movement of species and seeds throughout the entire forest, an effect that often results in loss of those species that require larger blocks of habitat (e.g., black bear, bobcat, certain bird species). Additionally, fragmented forests provide decreased benefits to neighboring societies from services these societies often substantially depend on (e.g., clean water, mitigation of floods and droughts, pollination in agricultural fields, and pest control) (Daily et al. 1997). Appalachian oak-hickory forests are threatened by development (e.g., residential, agricultural, communication antennas), either directly within the community or in the surrounding landscape. Other threats include habitat alteration (e.g., roads, utility ROWs, excessive logging, mining, deer over-browsing), and recreational overuse (e.g., ATVs, hiking trails, campgounds, ski slopes). A few Appalachian oak-hickory forests are threatened by invasive species, such as buckthorn (Rhamnus cathartica), bluegrass (Poa compressa), barberry (Berberis thunbergii), shrubby honeysuckle (Lonicera morrowii), tree-of-heaven (Ailanthus altissima), and multiflora rose (Rosa multiflora). Intentionally planted pine species (e.g., Pinus resinosa, P. strobus) may become established and be a threat to a few examples. Appalachian oak-hickory forests may be threatened by the non-native spongy moth (Lymantria dispar) which is one of North America's most devastating forest pests. The spongy moth is known to feed on the foliage of hundreds of species of plants in North America but its most common hosts are oaks and aspen. Spongy moth populations are typically eruptive in North America; in any forest stand densities may fluctuate from near 1 egg mass per ha to over 1,000 per ha. When densities reach very high levels, trees may become completely defoliated. Several successive years of defoliation, along with contributions by other biotic and abiotic stress factors, may ultimately result in tree mortality (McManus et al. 1980, Liebhold 2003).

Management should focus on activities that help maintain regeneration of the species associated with this community. Deer have been shown to have negative effects on forest understories (Miller et al. 1992, Augustine and French 1998, Knight 2003) and management efforts should strive to ensure that regenerating trees and shrubs are not so heavily browsed that they cannot replace overstory trees. Avoid cutting old growth examples and encourage selective logging areas that are under active forestry.

Regularly assess the presence and degree of impact that spongy moths have on this community. Research the composition of Appalachian oak-hickory forests statewide in order to characterize variations. Collect sufficient plot data to support the recognition of several distinct Appalachian oak-hickory forest types based on composition and by ecoregion.

This community is currently known from the lower Hudson Valley within the Hudson Highlands, the Hudson Limestone Valley, and the Taconic Foothills. Appalachian oak-hickory forests are also known from the Catskill Mountains, the St. Lawrence and southern Lake Champlain Valleys, the Lake George Valley, the Upper Delaware River Valley, and the western Finger Lakes Region.

The range as a broadly-defined floristic community may be most of the Appalachian Mountains from Maine, south to Alabama and Georgia. Range of occurrences with closest floristic affinities to New York may extend north to Maine, south toTennessee and west to Ohio and Kentucky.

A hardwood forest that occurs on well-drained sites, usually on ridgetops, upper slopes, or south- and west-facing slopes. The soils are usually loams or sandy loams. This is a broadly defined forest community with several variants. The dominant trees include one or more species of oak.

Known examples of this community have been found at elevations between 112 feet and 2,280 feet.

Early spring is a good time to catch many of the understory trees and shrubs in bloom. Flowering dogwood, shadbush, choke cherry, and maple-leaf viburnum all provide visual sprays of color in the spring. 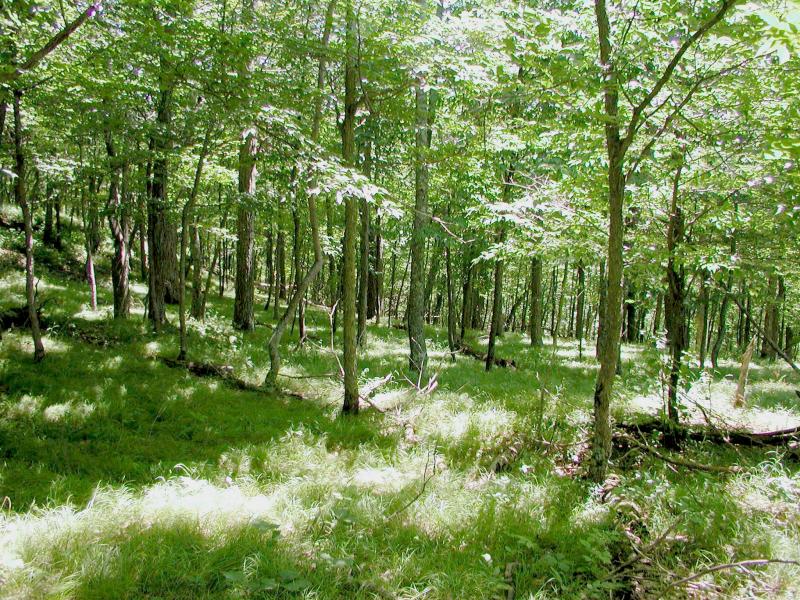 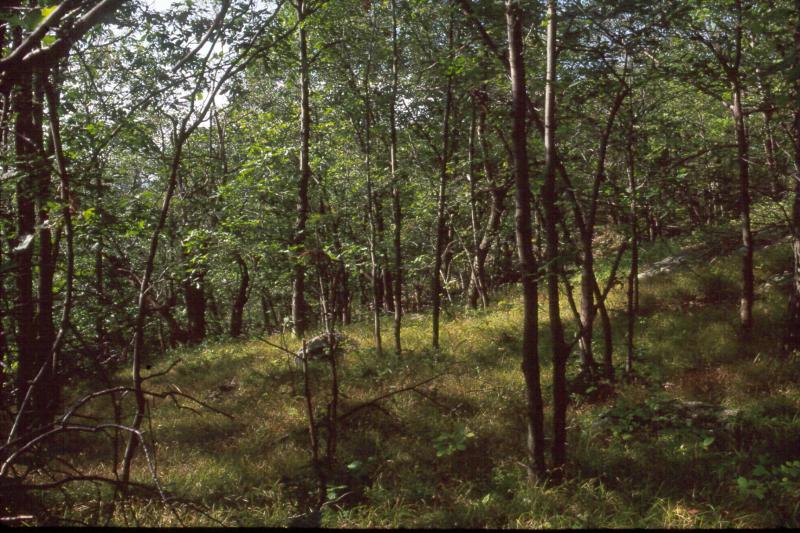 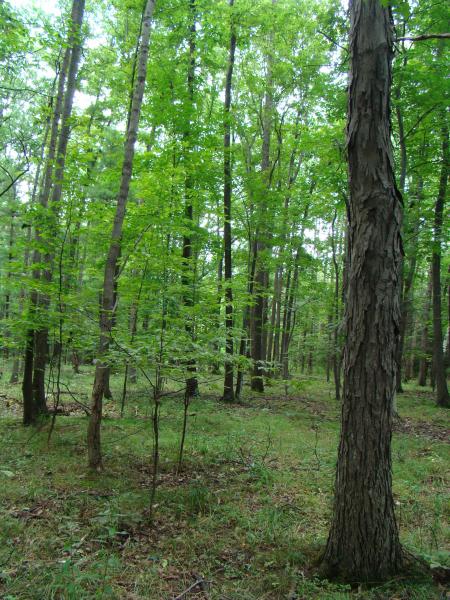 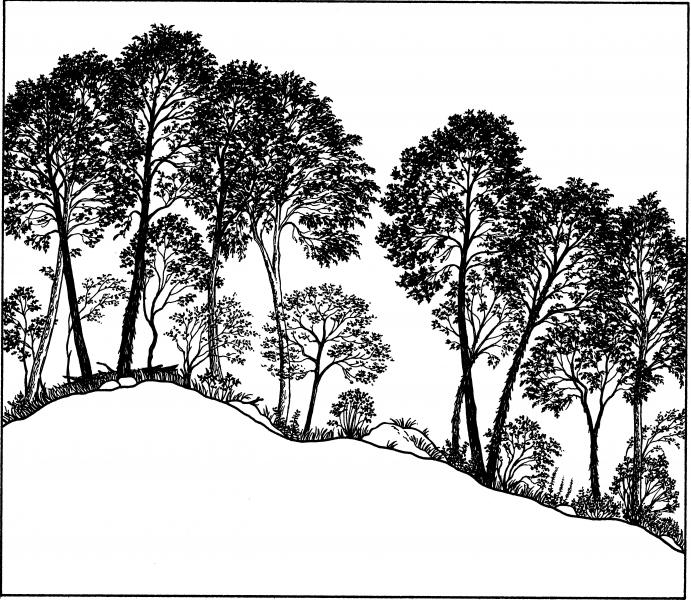 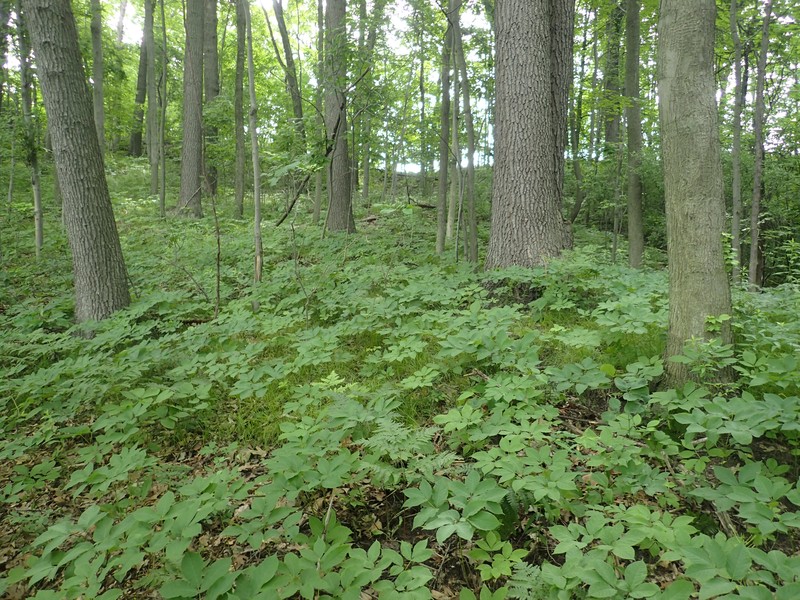 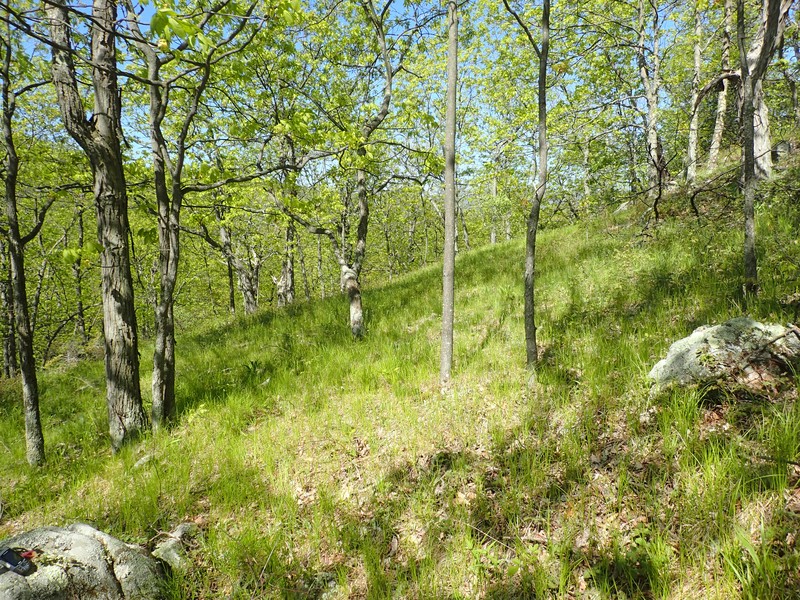 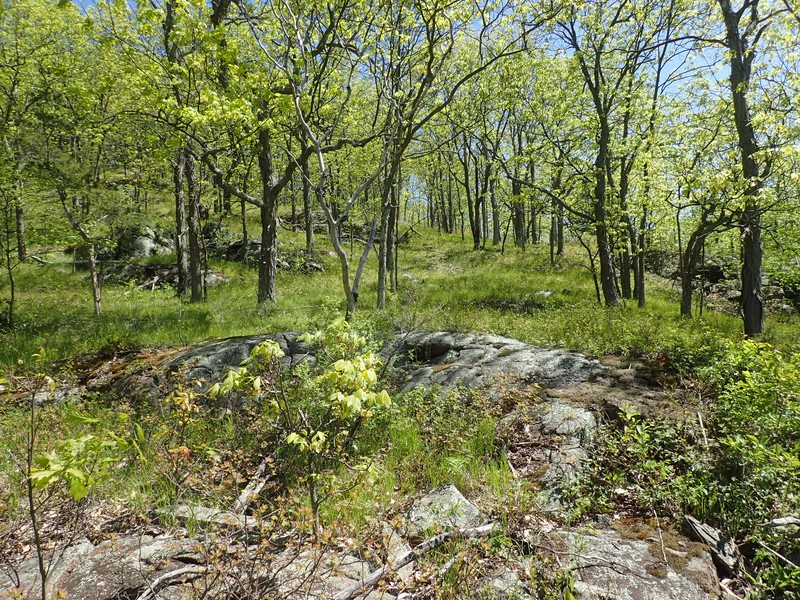 This figure helps visualize the structure and "look" or "feel" of a typical Appalachian Oak-Hickory Forest. Each bar represents the amount of "coverage" for all the species growing at that height. Because layers overlap (shrubs may grow under trees, for example), the shaded regions can add up to more than 100%.