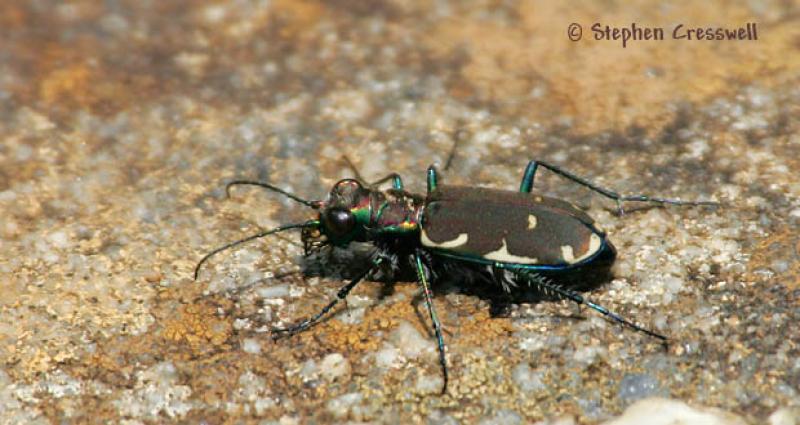 Despite its common name of Appalachian tiger beetle, this species was first described from specimens collected in the White Mountains of New Hampshire. The origin of the specific name, ancocisconensis, is apparently derived from aucocisco, an area shown on 16th and 17th century charts for the area west of Portland Harbor, Maine (Wilson 1979).

Populations of this species are currently known from 10 creeks or rivers in three different regions of the state. Although it is likely that a few historically documented populations are also extant and additional new populations remain to be discovered, the total number of populations is not expected to be large and there are existing and potential threats at some sites.

It is impossible to assess short-term trends for this species as survey efforts in the past 10 years have focused on the discovery of new locations rather than periodic visits to known sites to determine changes in population levels.

It is difficult to assess population trends for this species as historical data gives little sense of population sizes and as new locations probably represent populations that were always present, but had not yet been documented.

Alteration of natural flooding regimes, primarily due to construction of dams, is probably the primary threat to this species (Knisley and Schultz 1997, New York Natural Heritage Program 2006). Dams will inundate cobble bar habitat upstream of the dam while the natural flooding regime is altered downstream of the dam. When natural flooding regimes are altered, cobble bars become overgrown with dense herbaceous and shrub vegtation becoming unsuitable for the beetles. Gravel mining of cobble bars is also a major threat in some regions of the state. Off road vehicle use of cobble bars can destroy larval habitat and has been noted as a threat both in the literature and during on site surveys in western New York (New York Natural Heritage Program 2006). Removal of riparian forest cover is also a possible threat.

Maintenance of natural flooding regimes and streamside riparian vegetation is desirable in watersheds where this species occurs. Minimizing off road vehicle use of cobble bar habitats should reduce or prevent the loss of occupied habitats or areas that might otherwise be suitable for occupation.

Extant populations of this species occur in several different major watersheds in New York including the Delaware, Lake Champlain, Lake Erie, Southwestern Lake Ontario, and Upper Hudson. It is likely that the species also occurs in the Susquehanna drainage; however, its presence in the St. Lawrence drainage is less certain. Counties of occurrence include Erie, Wyoming and Livingston in western New York; Ulster, Sullivan and Greene in the Catskills region; and Essex and Warren in the eastern Adirondacks.

The Appalachian tiger beetle is a species of the eastern United States and southeastern Canada. The species range extends from the Gaspe region of Quebec south through western Maine, New Hampshire, Vermont, New York, northeastern Ohio, Pennsylvania and south along the Appalachian mountains to northern Georgia. Old records indicate that the range formerly extended west into Indiana and Illinois (Pearson et al. 2006, Leonard and Bell 1999).

Like other tiger beetles in the northeast, the Appalachian tiger beetle is a small insect approximately 0.5 inches (14-16 mm) in length with long sickle-shaped mouthparts, long thin antennae with 11 segments, a long body form with head and eyes wider than the middle portion (thorax) of the body, long thin legs for running, and a pattern of white markings referred to as maculations, on wing covers (elytra) located on top of the main portion of the body (abdomen). Like many northeastern species, the elytra of the Appalachian tiger beetle are a brown - bronze color and the maculations show as three thin, long white lines on each of the two elytra. The front maculation is shortened at its rear and does not curl forward in the shape of a "C" while the middle maculation has a long base along the edge of the elytra and a section that bends into the main portion of the elytra. The head, thorax, and abdomen of the Appalachian tiger beetle are a metallic blue-green to violet on the undersides. As with other tiger beetles, the larvae live in burrows in the ground and are white and grublike in appearance (Pearson et al. 2006, Leonard and Bell 1999).

Close examination of the pattern of the white maculations on the wing covers (elytra) and the number of teeth on the labrum (upper lip) are the diagnostic characters to examine for determination of the Appalachian tiger beetle (Pearson et al 2006, Leonard and Bell 1999).

All tiger beetles are best identified as adults. Far fewer good diagnostic characters are available for identifying larvae, many species lack formal or complete larval descriptions, and there is no comprehensive key for those larvae that have been described (Pearson et al. 2006). The larvae of the Appalachian tiger beetle has not been described (Leonard and Bell 1999).

Most adult tiger beetles are diurnal animals spending the warmer parts of the day running along the surface of the ground hunting, eating, and mating. They pursue prey by running in short, fast spurts interspersed with brief stops. Appalachian tiger beetles appear to be especially wary and will fly short distances into the more heavily vegetated portions of their habitat when they are flushed. Like most tiger beetles, they are most active on warm, sunny days and will retreat to burrows or hiding places at sunset or when skies become overcast.

This is a spring-fall species with adult activity periods from late April through June and again from mid July through early September, though fall activity periods are reported to be reduced or absent in some populations (Pearson et al. 2006, Knisley and Schultz 1997, Leonard and Bell 1999). The majority of records for New York are from either June or August and early September although there are July records as well. The lack of April or May records may reflect the lack of surveys during those months or later emergence in the northern portion of the species range (Gordon 1939, New York Natural Heritage Program 2006). The life cycle for this tiger beetle is thought to be two years in the southern portion of the range and three years in the northern portion, with larvae present in burrows throughout the year (Pearson et al. 2006, Knisley and Schultz 1997).

The time of year you would expect to find Appalachian Tiger Beetle reproducing and larvae present and active in New York.

Information for this guide was last updated on: April 4, 2006