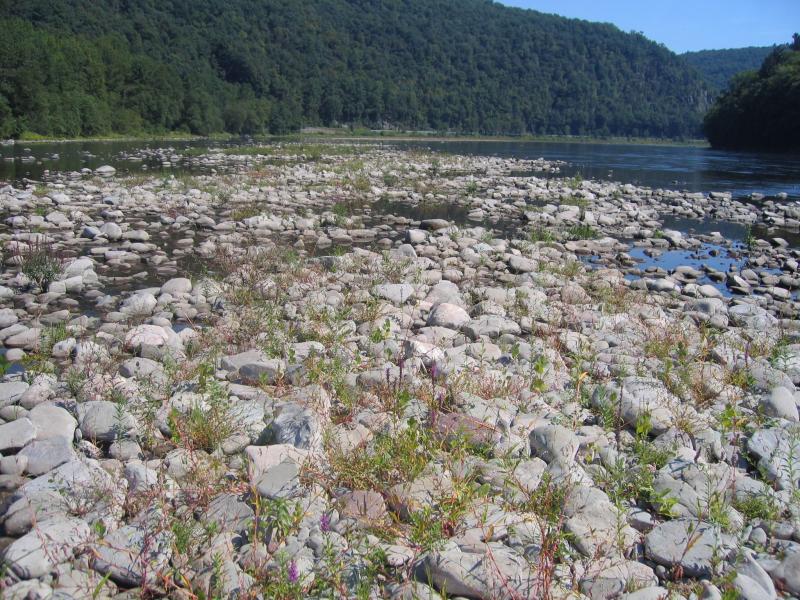 Cobble shore communities associated with rivers and streams are particularly dynamic, as they are subject to the seasonal influences of ice scour and flooding. This community type includes both "active" and "stable" cobble shores. Active shores are sites where cobble is loose, moved frequently due to wave and current action. This type of cobble shore is particularly influenced by seasonal hydrologic changes. Stable cobble shores are more densely vegetated with grasses and forbs, but are still subject to periodic disturbance. For this reason, invasive species such Japanese knotweed (Reynoutria japonica var. japonica) and purple loosestrife (Lythrum salicaria) have become extremely abundant at some sites.

There are a couple thousand occurrences statewide. A few documented occurrences have good viability and several are protected on public land or private conservation land. This community is limited to the water bodies with cobble shores in the state, and there are only a few high quality examples. The current trend of this community is probably stable for occurrences on public land, or declining slightly elsewhere due to moderate threats that include alteration to hydrology, shoreline development, instream gravel mining, and invasive species.

The number and acreage of cobble shores in New York have probably declined slightly in recent decades as a result of shoreline development, alteration to the hydrology, instream gravel mining, and invasive species.

The number and acreage of cobble shores in New York have probably declined moderately from historical numbers likely correlated to the alteration of natural hydrology from impoundments, shoreline hardening, and instream gravel mining.

Where practical, establish and maintain a natural riparian buffer to reduce storm-water, pollution, and nutrient run-off, while simultaneously capturing sediments before they reach the cobble shore. Avoid habitat alteration along the shoreline and surrounding landscape. Restore cobble shores that have been affected by unnatural disturbance (e.g., remove obsolete impoundments in order to restore the natural hydrology). Reduce or eliminate instream gravel mining from the best examples of cobble shore. Prevent the spread of invasive exotic species into the cobble shore through appropriate direct management, and by minimizing potential dispersal corridors, such as roads and bridges. Maintain or restore the natural flood and ice scour regime.

Where practical, establish and maintain a natural riparian buffer to filter storm-water, pollution, and nutrient run-off from surrounding uplands and to capture sediments before they reach the cobble shore. Avoid habitat alteration along the shoreline and in surrounding landscape. Minimize potential dispersal corridors for exotic species, such as roads and bridges. Maintain or restore the natural flood and ice scour regime.

Survey for occurrences statewide to advance documentation and classification of cobble shore. Continue searching for large sites in excellent to good condition (A- to AB-ranked).

Research the composition of cobble shores statewide in order to characterize variations (e.g., river vs. lake shorelines) and to clearly separate this community from cobble shore wet meadow and riverside sand/gravel bar. Collect sufficient plot data to support the recognition of several distinct cobble shore types based on composition, cobble type, and by ecoregion.

Cobble shores are widespread throughout upstate New York, north of the North Atlantic Coast Ecoregion. Extensive lakeside cobble shores are predicted along Lake Champlain, especially in the northern part of the lake. Large riverside occurrences may be uncommon in the state.

A community that occurs on the well-drained cobble shores of lakes and streams. These shores are usually associated with high-energy waters (such as high-gradient streams), and they are likely to be scoured by floods or winter ice floes. This community includes both active and stable shores. Active cobble shores have loose cobbles that are moved by waves or river currents; these shores are sparsely vegetated, and they have comparatively few species. Stable cobble shores have cobbles embedded in sand or peat, usually with vegetation rooted between the cobbles, and are generally more diverse than active cobble shores.

Cobble shores can be found along streams throughout upstate New York, north of Long Island. The community occurs on well-drained cobble, rock that ranges from 10 to 25 cm in diameter. Native and non-native annual and biennial species are usually present on the more actively scoured cobble shores, such as knotweeds (Persicaria spp.) and mustards (e.g., Brassica nigra and Barbarea vulgaris).

Known examples of this community have been found at elevations between 90 feet and 978 feet.

This community can be identified anytime during the snow-free seasons, but it is most enjoyable to visit during the growing season, from late May through summer, when plants are flowering and water temperatures are conducive to wading. 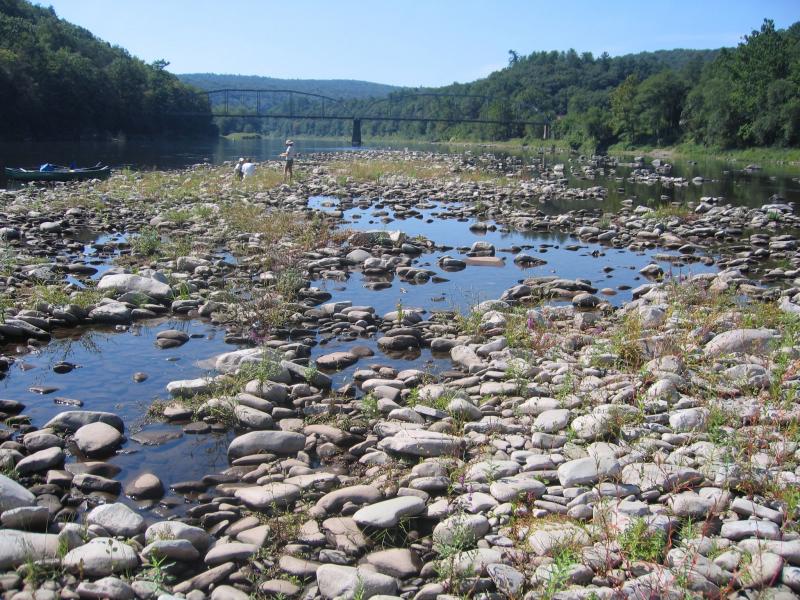 This figure helps visualize the structure and "look" or "feel" of a typical Cobble Shore. Each bar represents the amount of "coverage" for all the species growing at that height. Because layers overlap (shrubs may grow under trees, for example), the shaded regions can add up to more than 100%.