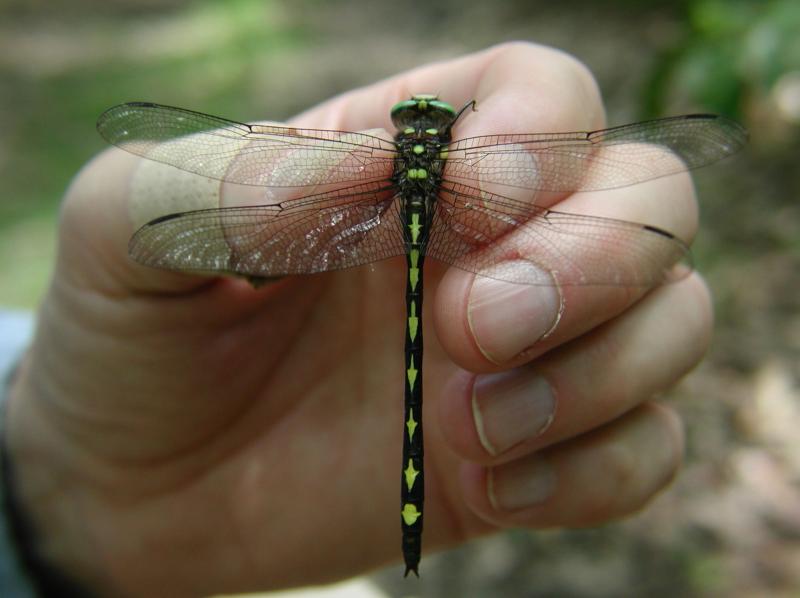 Spiketail dragonflies are so named because the long ovipositor of the female extends beyond the tip of the abdomen. The females lay their eggs by hovering over shallow water and driving the long ovipositor vertically into the shoreline mud or stream bottom in a fashion reminiscent of a sewing machine.

This species has been recorded from approximately 16 locations in 11 separate counties across a broad extent of the southern tier, Finger Lakes, and Hudson Valley, and a number of these locations have been found in the past 5-10 years. The habitat is not uncommon within the broad range occupied by the species and many additional populations will undoubtedly be discovered as a result of more extensive survey efforts. However, there are a number of potentially significant threats to the habitat required by these dragonflies and populations at individual sites are not expected to be large.

There is no information on population trends for this species although it seems likely that suitable sites are being lost due to development and hydrological changes in proximity to seepage areas and small forest streams.

Seepage areas are key areas for this species for oviposition, and although there is little published information available citing specific cases of negative impacts to the various species of stream and seepage dwelling odonates, any activities which degrade the sensitive hydrology of these habitats would threaten populations of these species. The most important likely negative impacts would come from changes in the natural hydrology such as the building of dams, increases in the sediment load of the seepage or associated stream (such as might result should agricultural activities or logging occur down to the stream edge), changes in dissolved oxygen content, direct effects of pesticides, and chemical contamination by runoff of agricultural or other discharge.

Arrowhead spiketails oviposit and spend most of their time at small spring fed streams and seeps with soft bottoms and sometimes rocks. These streams are usually in forested areas although the seepage areas themselves may be in small areas of more open habitat types such as meadows dominated by ferns and other moisture dependent herbaceous plants. Adults may feed in forest clearings in the vicinity of the principal breeding habitat.

The arrowhead spiketail is primarily a species of the eastern United States. Its range extends from Maine, southern Quebec and southern Ontario, west to Michigan and Wisconsin, and south to eastern Oklahoma and Texas, and east across the Gulf Coast states to northern Florida (Dunkle 2000).

Adult spiketails are large, black or brown dragonflies with strongly contrasting, bold yellow stripes and spots on the thorax and abdomen, respectively. Their eyes are large, green or blue-green, and barely touch at a single point on the top of the head. The legs are short and the wings are clear. Adult females have the same coloration and pattern as males, but have thicker abdomens and a prominent ovipositor that extends beyond the abdomen. The arrowhead spiketail has a black thorax with two bright yellow dorsal stripes and two bright yellow lateral stripes. The abdomen is also black with a striking pattern of bright yellow spots on top. The spots on abdominal segments 4-8 have a unique and distinctive arrowhead shape. The eyes are green in the northern portion of the species range, but blue where the species occurs on the southeastern coastal plain. Adults are approximately 3.1 inches (7.9 cm) in length in the northern portion of the range, but slightly larger to the south (Dunkle 2000). The larvae are elongate, subcylindrical, lack spines, and are very hairy. The antennae are composed of seven slender segments. The labium is large and spoon shaped with large, jagged teeth on the forward margin. Body length is approximately 1.53-1.57 inches (39-40 mm) at maturity (Walker 1958), which is reached at three or four years.

Close examination of the abdominal pattern is necessary for positive identification.

Adult males patrol seepage areas with herbaceous vegetation and small rivulets, typically flying at a height of 1-3 feet, mainly during the midday hours. Females hover over the shallow water and drive their abdomen into the substrate to lay their eggs. These dragonflies usually perch fairly close to the ground on weed stems or twigs along forest edges. They will fly in forest clearings to feed (Dunkle 2000, Nikula 2003).

Dates for New York records have been previously listed as May to July 1 (Donnelly 1999), but most recent New York records are from mid June through mid July with July 11 as the latest record to date (New York Natural Heritage Program 2005). Flight dates for this species in Massachusetts are from early June through mid July (Nikula 2003), whereas flight dates in the western Great Lakes states extend from late May to early August. Dunkle (2000) gives a somewhat longer flight period of mid April to late August, but this range would be for the full range of the species and this species would certainly not be expected to be flying in April anywhere in New York. August flight dates for New York seem possible, especially if the species is found in some more northern counties.

The time of year you would expect to find Arrowhead Spiketail present and reproducing in New York.

Information for this guide was last updated on: April 6, 2005