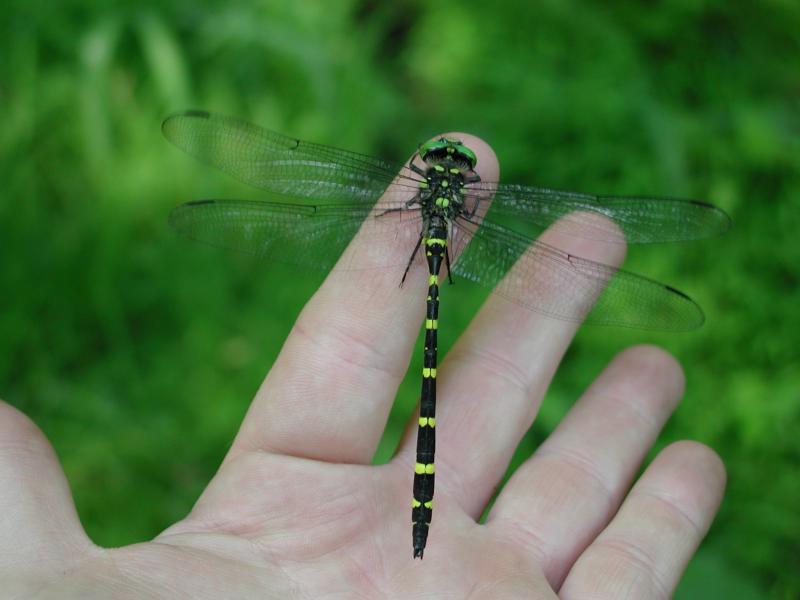 The Tiger Spiketail is known to occur in seven counties in New York State, with no population estimates determined. Further survey efforts may result in the identification of additional populations or range expansions, and may enable population sizes to be estimated.

No estimate of population size for this species has been made based on observations from five New York counties made in the mid-1990s to present (New York Natural Heritage Program 2007). General reports of observations made in the early 1990s include locations in two additional counties (Donnelly 2004), and information prior to this time frame is limited. Therefore, any new location information on the Tiger Spiketail in New York may reflect heightened interest in surveying for this species rather than a population increase or a range expansion (Holst 2005).

Two observations of the Tiger Spiketail have been made prior to the mid-1990s in Essex and Tompkins counties and recent observations from the mid-1990s to present have been made in Putnam, Westchester, Rockland, Schuyler, and Erie counties (Donnelly 2004, New York Natural Heritage Program 2007). Since the full extent and size of the populations have not been determined, long-term trends are unclear.

Any activity that might alter groundwater seepages could impact Tiger Spiketail populations, as seepage areas are key oviposition sites (Holst 2005). Such threats might include chemical contamination from agricultural run-off, changes in dissolved oxygen content, increases in sediment load, and the building of dams (Holst 2005).

Any measures to reduce water contamination, agricultural run-off, siltation, and damming that would affect flow of springs and small stream seepage areas should be considered when managing for this species (Holst 2005).

Further research is needed to define the distribution and population size of the Tiger Spiketail. In addition, research is required to understand the habitat requirements and threats to this species, and to create appropriate management guidelines for its persistence in known locations (Holst 2005).

Tiger Spiketails inhabit coldwater streams, small spring trickles, or seeps in partial shade that are too small for fish where there is a constant, slight water flow and a non-silt substrate (Barlow 1995, Dunkle 2000, Nikula et al. 2003, Holst 2005). Larvae are aquatic and found in the water during this lifestage, whereas adults are terrestrial and are found in habitats surrounding streams, springs, and seeps.

Female dragonflies in the Spiketail family have an elongated ovipositor (a modified appendage used to pierce a substrate and lay eggs) that extends beyond the tip of their abdomen, giving them a spiked-tail appearance (Needham et al. 2000, Nikula et al. 2003). Tiger Spiketails are large (2.9 inches), blackish-brown dragonflies with yellow bands on their abdomens. They have short legs and their thorax has two wide, yellow lateral (side) stripes. They have pale, metallic green eyes and, like other spiketails, their eyes meet at one point on top of their heads. This species may be distinguished from other spiketails by its black coloration on the rear of the head behind the eyes. This area is mainly yellow on other species.

Spiketail larvae are aquatic and burrow tail first into the substrate of waters where they are found. They then cover themselves with muck and wait for prey to happen by (Mead 2003). Adults are terrestrial and perch at an oblique (about a 45 degree) angle on vegetation on the edges of their water habitats and hunt in fields and forest clearings (Nikula et al. 2003). Females oviposit (lay eggs) by hovering vertically over shallow water and plunging the tip of their abdomen into the mud in a sewing-machine like movement (Dunkle 2000, Nikula et at. 2003).

Tiger Spiketail larvae feed on smaller aquatic invertebrates and adults feed on insects which they capture in flight.

Adults are active from early June to early September range-wide (Dunkle 2000, Needham et al. 2000); however, have been observed active from mid-July through mid-August in NJ (Barlow, 1995). A similar activity period is expected in New York State. The best time of day to look for adult males is from late in the day until dusk, and their peak activity is around 6 P.M. Larvae may be found in appropriate aquatic habitats year-round.

The time of year you would expect to find Tiger Spiketail present and reproducing in New York.

Davis, William T. 1913. Dragonflies of the vicinity of New York City with a description of a new species. Journal New York Ent. Society 21: 11-29.

Information for this guide was last updated on: April 16, 2007