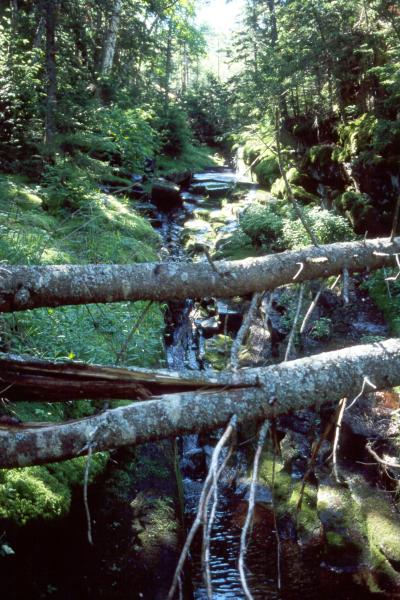 Intermittent streams are ephemeral waterways that serve as conduits only during particularly wet and rainy times of year. They are typically the uppermost reaches of stream systems. During spring snow melt and heavy rains, intermittent streams fill with water, draining the surrounding watershed, and transporting nutrients to the lower stream reaches. As with other ephemeral aquatic communities such as vernal pools, flora and fauna that inhabit intermittent streams are specially adapted for a wide range of hydrologic conditions. These communities can transition from being a coursing stream, to having remnant ponded sections, and then to being completely dry during a single growing season.

There are probably tens of thousands occurrences statewide. Intermittent streams are typically small and may be overlooked as streams after the water draws down. A few documented occurrences have good viability and are protected on public land or private conservation land. This community has statewide distribution, and includes several high quality examples. The current trend of this community is probably stable for occurrences on public land, or declining slightly elsewhere due to moderate threats related to logging in adjacent forests, recreational overuse by ATVs, and alteration to the natural hydrology. This community has probably declined moderately from historical numbers likely correlated with logging and development of the surrounding landscape.

The number and acreage of intermittent streams in New York have probably remained stable or have slightly declined in recent decades. Their relatively small size and seasonal hydroperiod may have contributed to the decline with many occurrences going undetected.

The number and acreage of intermittent streams in New York have declined moderately from historical numbers, likely correlated to the alteration to the natural hydrology and direct destruction.

Where practical, establish and maintain a natural stream buffer to reduce storm-water, pollution, and nutrient run-off, while simultaneously capturing sediments before they reach the intermittent stream. Buffer width should take into account the erodibility of the surrounding soils, slope steepness, and the use of the surrounding upland by intermittent stream fauna. Avoid habitat alteration within the stream and surrounding landscape. For example, roads and trails should be routed around intermittent streams, and ideally they should not pass through the buffer area. Restore intermittent streams that have been affected by unnatural disturbance (e.g., remove obsolete impoundments and ditches in order to restore the natural hydrology). Prevent the spread of invasive exotic species into the stream and buffer area through appropriate direct management, and by minimizing potential dispersal corridors, such as roads.

Survey for occurrences statewide to advance documentation and classification of intermittent streams.

Research is needed to fill information gaps about intermittent streams, especially to advance our understanding of their classification, hydrology, floristic variation, and characteristic fauna. Research is needed to see if intermittent stream species assemblages are related to the underlying bedrock (e.g., acidic vs. alkaline) and the surrounding forest type (e.g., needle-leaf evergreen vs. broad-leaf deciduous).

This community is widespread throughout New York State. It is likely to be represented by different variants corresponding to major watersheds and/or ecoregions.

Intermittent streams are small, ephemeral streambed communities in the uppermost segments of stream systems where water flows only during the spring or after a heavy rain, and often remains longer, ponded in isolated pools. These streams typically have a moderate to steep gradient and hydric soils. The streambed may be covered with diverse emergent and submergent bryophytes. Characteristic vascular plants are hydrophytic and may include American golden-saxifrage (Chrysosplenium americanum) and pennywort (Hydrocotyle americana). Fauna is diverse and limited to species that do not require a permanent supply of running water, that inhabit the streambed only during the rainy season, or that are pool specialists. Characteristic fauna include amphibians such as green frog (Rana clamitans) and northern two-lined salamander (Eurycea bislineata), and macroinvertebrates such as water striders (Gerris spp.), water boatman (Corixidae), caddisflies (Trichoptera), mayflies (Ephemeroptera), stoneflies (Plecoptera), midges (Chironomidae), blackflies (Simulidae), and crayfish (Cambarus bartoni).

Known examples of this community have been found at elevations between 1,010 feet and 3,710 feet.

Intermittent streams are best observed after spring thaw when they are flowing with meltwater. April is generally a good month to visit intermittent streams in New York (earlier to the south and later to the north). Repeat visits to the same stream as the water draws down increases the chances of seeing the full array of characteristic species at different stages of their life cycle. 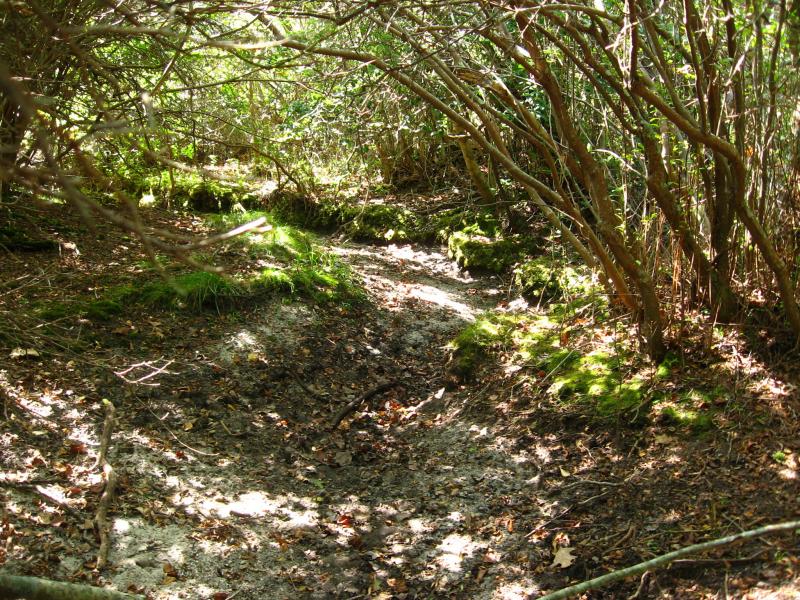 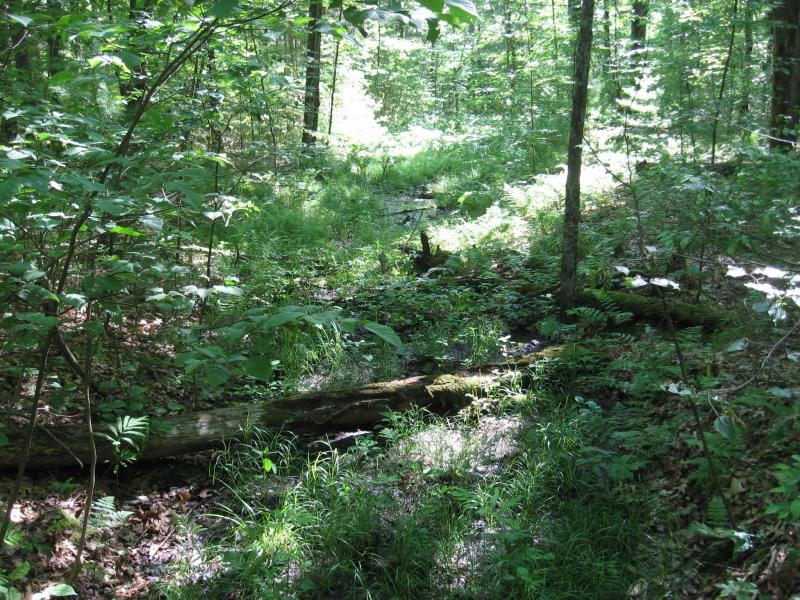 This figure helps visualize the structure and "look" or "feel" of a typical Intermittent Stream. Each bar represents the amount of "coverage" for all the species growing at that height. Because layers overlap (shrubs may grow under trees, for example), the shaded regions can add up to more than 100%.