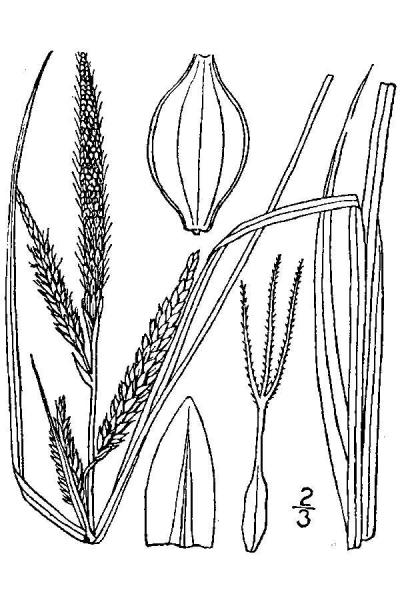 Barratt's sedge is named in honor of Joseph Barratt who lived from 1796-1882 (Fernald 1970). The core of this species range is the New Jersey Pine Barrens.

There are currently three known populations. The previous reported historical locations have most likely been lost to development. This is a plant of wet soils within fire-maintained pine barrens, a rather rare community type. The known populations are large and within protected landscapes, but few to no additional popualtions will likely be encountered.

A few populations are believed to have been extirpated within the past century due to urban development. There are three known extant populations that have been known for at least the past half-century. There are at least three more populations which are only known from historical records. Two of these have been searched for without success. It is unclear if these populations are still extant although, the likely hood is small. Overall, long term trends in New York indicate a decline.

One population is adjacent to a railroad in a wet pine barrens. While the openness created by the railroad has probably been helpful to C. barrattii herbicide spraying to keep the railroad right of way open could negatively impact the population.

Surveys of historical populations should be continued until these populations are found or a determination can made that the populations have been extirpated.

Carex barrattii occurs in wet sandy or peaty soils in pine barrens including bogs. In pine barrens it grows in wet depressions and along streams. It is often associated with openings and disturbances such as along fire breaks, trails, roads, and railroads (New York Natural Heritage Program 2006). Bogs, swamps, wet woods, primarily on acidic substrata (Ball 2002). Its natural, undisturbed habitats in the mid-Atlantic are wetland depressions in pine or oak barrens, along the shores of rivers and ponds or in peaty bogs or cedar swamp edges. The habitat often occurs as open grassy savannah-like areas with abundant sunshine. Carex barrattii prefers acid soils, and the soil pH where the species occurs is less than five. Carex barrattii also occurs in a variety of disturbed or artificially maintained habitats such as power line rights-of-way, abandoned cranberry bogs, and railroad embankments (J. C. Ludwig, personal communication in Sharp 2001). Wet ground, especially in pine-barren swamps near the coast (Gleason and Cronquist 1991). Peaty swamps, pinelands, and wet woods (Fernald 1970).

In New York, C. barrattii is known only from western and central Long Island. Many of the populations in this area are believed to have been extirpated by urbanization. There is a voucher specimen that says "Yates Co., NY." This specimen is believed to have been collected by S.H. Wright and it is suspected that the "locality" information is simply where Wright lived and not where he collected this specimen.

Carex barrattii is rare and scattered throughout most of its range. Its center of abundance is in the New Jersey pine barrens where there are scores of populations. Outside of this area it is very infrequent or rare with most other states having at most a few extant populations. It is known, at least historically, from Connecticut south along the coastal plain to North Carolina. It is also known inland at a few disjunct sites with plants of coastal plain affinities including western Virginia, southwestern North Carolina, northwestern South Carolina, south-central Tennessee, northern Georgia, and northern Alabama (Ball 2002, New York Natural Heritage Program 2006, Weakley 2006).

Carex barrattii is loosely cespitose and long rhizomatous. It has roots with dense yellow tomentum like other members of section Limosae. Basal leaf sheaths of reproductive culms are bladeless and become filamentose as they mature. Upper leaf blades are 2-5 mm wide, revolute, and light-green to glaucous when young. Culms are 20-90 cm tall with bracts shorter than the inflorescences. The terminal spikes are staminate and 20-50 cm long. The lateral spikes are usually androgynous with the flowers densely arranged. Pistillate scales are 2.4-4.0 mm long and black to brownish. Perigynia are 2.5-3.5 mm long and rounded at the apex with a very short abrupt beak 0.1-0.5 mm long (Mackenzie 1931-1935, Ball 2002).

Carex barrattii is easiest to identify when it has immature to mature perigynia. At times, especially when plants become shaded, most individuals will only be vegetative making identification more challenging.

Carex barrattii starts to produce immature perigynia in late May. These mature and persist into early July or sometimes a little later. Towards the end of this season the perigynia are starting to shed easily. Therefore, the best time to survey for this species is June.

The time of year you would expect to find Barratt's Sedge fruiting in New York.