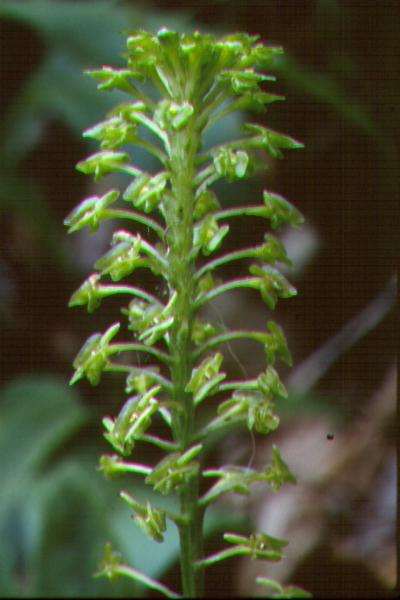 This is one of the smallest of our native orchids and very difficult to find. The only known New York population has been in decline and may even no longer exist. There are only about a half dozen known populations of this plant worldwide.

There are five historical populations plus a single population that is questionably still extant. This population was last observed with one plant in 1997 and has not been seen since despite multiple surveys and excellent boundary markings around the population. This population has had as many as 28 individuals. There remains questions as to whether or not this population may reappear. Active management is needed before we can hope to recover this population. In addition, surveys are needed on Long Island, the Hudson Highlands, and the Shawangunk Mountains as they hold potential for additional populations.

Plants of the only remaining population have not been seen in many years but it is unknown if the plants remain in a dormant state. Since this is such a difficult plant to locate, determining trend status with only one known population is nearly impossible.

There have only ever been five records of the plant in the state but the plants are very difficult to find so it is unknown whether these historical records are definitely extirpated. This globally rare plant has likely always been rare.

While this plant can do well under a full canopy, particularly if the canopy is of oak or pine species, it seems to have difficulties when shaded by aggressive herbs and vines. Based on the historical locations, development has had little impact on the previously known New York populations. The situation may be different for populations outside of New York. Within New York, the greatest threat most likely is habitat succession.

Management needs are difficult to determine without additional research. Until that research is undertaken, we have to depend on anecdotal guesses. One of these includes removing aggressive herbs and vines from known habitat. This may best be accomplished by hand-pulling the herbs/vines. Paul Catling thinks that the soil disturbance may actually help this plant. In areas where soil disturbance may only increase invasive species dominance, targeted herbicide application may be suitable.

Much more research needs to be done into the ecology of the species so more targeted surveys can be performed. The greatest challenge with this plant is simply finding it. If models were developed to predict potential habitat, survey efforts could be targeted at those locations. There is also a need for a better understanding of the ecological requirements needed by this plant, particularly if/how the landscape where populations occur should be managed.

This orchid was historically known from Albany, Nassau, Orange, Richmond, and Suffolk counties. Today, it is only known from a single location.

This is a very small orchid only about 1 or 2 dm tall. There is one oval green clasping leaf about one third to half the way up the stem. At the top of the stem is a cylindrical spike of up to 150 tiny, stalked, chartreuse-green flowers that wilt from the top down. The lip is divided into two lobes with another petal sticking out at the top between the lobes.

For proper identification, this orchid must be observed with flowers or fruit. Due to the extreme rarity of this plant, only take pictures and possibly pinch off a single flower to allow for verification of the species..

The basal lobes of the lip on Malaxis unifolia are not prominent, 0.4-1.1 mm long, mostly less than 1.5 times as long as the apical lateral lobes and less than 0.6 times as long as the length from the base to the tip of the mid-lobe. The inflorescence has pedicels that are (3.8) 5-10 (13) mm long (and more than 15 mm long in plants with inflorescences over 45 mm long). These inflorescenses are densely-flowered above with the lower flowers soon wilting. This is a plant of swamps, bogs and wet habitats.

This orchid flowers mid-July to August with fruits persisting into September. This small plant is difficult to find at any time during the year, but surveys from July to mid-August have a great chance of locating this plant while in flower.

The time of year you would expect to find Bayard's Adder's Mouth Orchid flowering and fruiting in New York. 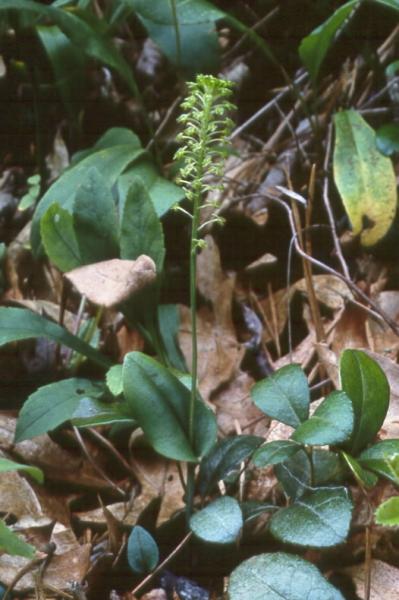 This was once considered part of Malaxis unifolia, but a systematic study by Paul Catling (1991) supported Fernald's (1950) recognition of this terrestrial orchid. Malaxis unifolia is typically found at wetter locations while Malaxis bayardii is found at drier sites.