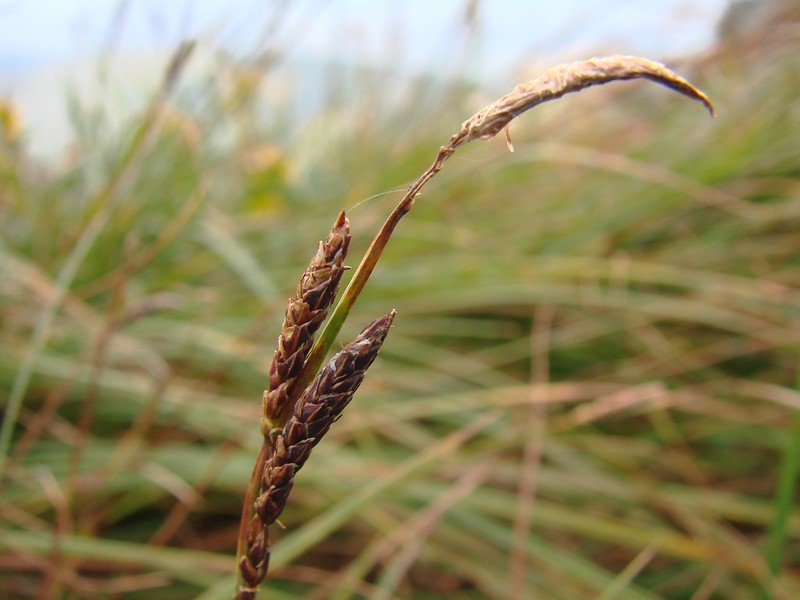 The specific epithet bigelowii is named in honor of its discoverer Jacob Bigelow who lived from 1787 till 1879 (Fernald 1970).

There are currently eleven known populations, all restricted to the Adirondack High Peaks. While these plants may be impacted to some extent by hikers and other recreational activities, their long-term protection is very promising.

There is no data documenting short term trends with C. bigelowii. It has been observed that trampling by hikers appears to be negatively impacting populations. Recent efforts by summit stewards to facilitate protection of alpine plants may be helping to reverse this trend. Therefore, although short term trends are not clear they may indicate at least a slight decline.

Populations of Carex bigelowii have been known from the high peaks region of the Adirondacks since at least the early 1800's. All but one of these populations is still known. Exact trends are unknown but many populations appear to be healthy and robust. The one population that is only known from historical records has been searched for without success but, the habitat at this site is fairly inaccessible and the population may still be extant. In recent years, some of the populations have been negatively impacted by trampling. Overall, long term trends appear to indicate that this species is stable or declining slightly in New York.

Trampling by hikers is a threat to populations of Carex bigelowii as well as other plants and alpine meadow communities that occur in these areas. At one of the populations this threat appears to be severe. Long term, these populations may be negatively impacted by global climate change.

The summit steward program that works to protect the fragile alpine areas appears to be helpful and should be continued.

Inventories should attempt to get precise information on aerial extent of populations to assess how they might be changing over time.

Carex bigelowii ssp. bigelowii is only known from the Adirondack high peaks in Essex County. It is at the southern edge of its range in New York and confined to alpine habitats. Stanley Smith, in the records he kept at the New York State Museum, reports that plants of C. bigelowii (as C. saxatilis) from Mt. Marcy were transplanted to Oriskany Swamp in Oneida Co. This report is a little confusing because C. saxatilis is not a synonym of C. bigelowii. It is unknown if this population is still extant but in either case this population is not tracked by the New York Natural Heritage Program because it is not a native population

Bigelow's sedge is a grass-like perennial. It has long rhizomes and grows in patches in alpine meadows. The leaves are strap-like and 1.5-4.0 mm wide. Stems are 10-50 cm tall and are terminated by 2-5 narrowly cylindrical flower/fruit clusters (spikes). The lower spikes are composed of female flowers which mature into fruits. The upper 1-2 spike(s) are composed of male flowers. The fruits (perigynia) are 1.8-3.5 mm long and are subtended by black scales (Standley et al. 2002).

Carex bigelowii ssp. bigelowii is long rhizomatous and colonial. Leaf blades are 1.5-4.0 mm wide and leaf sheaths are not ladder-fibrillose. Culms are 10-50 cm tall with the proximal bracts shorter than the inflorescences. The proximal (1-)2-3 spikes are pistillate and the terminal 1(-2) spikes are staminate. Pistillate scales are black and are equal to or shorter than the perigynia they subtend. The perigynia are green with dark spots and 1.8-3.5 mm long (Standley et al. 2002).

Carex bigelowii is easiest to identify when it has immature to mature perigynia. It is a very distinctive species and can be identified at other times of the year as well.

Carex bigelowii is a very distinctive sedge. It is also limited to alpine areas where other closely related species do not grow. It can be distinguished from all other members of section Phacocystis by its lack of ladder-fibrillose basal sheaths, proximal bracts equal to or shorter than the inflorescences, black pistillate scales, and veinless perigynia.

The phenology of C. bigelowii is effected by altitudes. It starts to flower in June and perigynia begin to form in July and persist into August or sometimes September. By the later part of this season, the perigynia are shedding heavily. Therefore, the best time to survey for C. bigelowii is from July till mid August.

The time of year you would expect to find Bigelow's Sedge fruiting in New York. 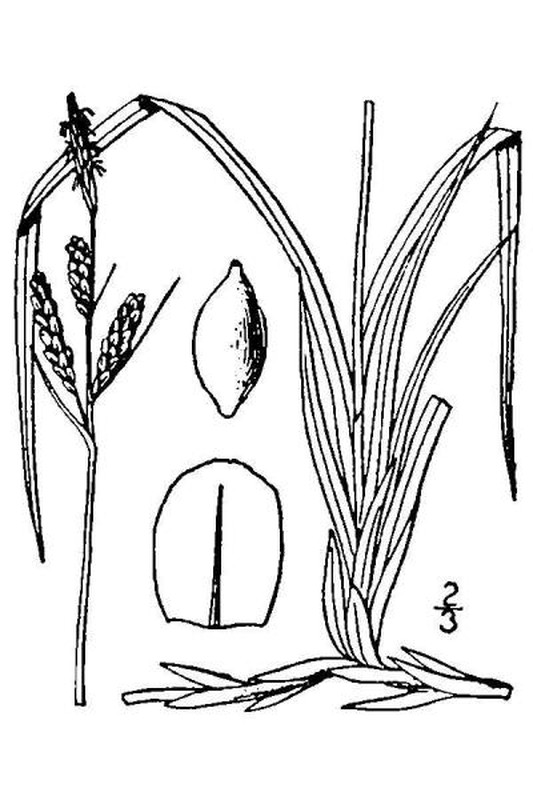 Carex bigelowii is a variable taxon with about five subspecies recognized worldwide. New York specimens are all referable to C. bigelowii ssp. bigelowii which is also known from Europe. No other subspecies occur in eastern North America. Plants of C. bigelowii spp. bigelowii in New York and New England tend to be larger and have a more acute perigynia apex than plants from further north. Carex bigelowii is in section Phacocystis. It previously had been placed in section Acutae but this section is no longer considered distinct (Gleason and Cronquist 1991, Standley et al. 2002).