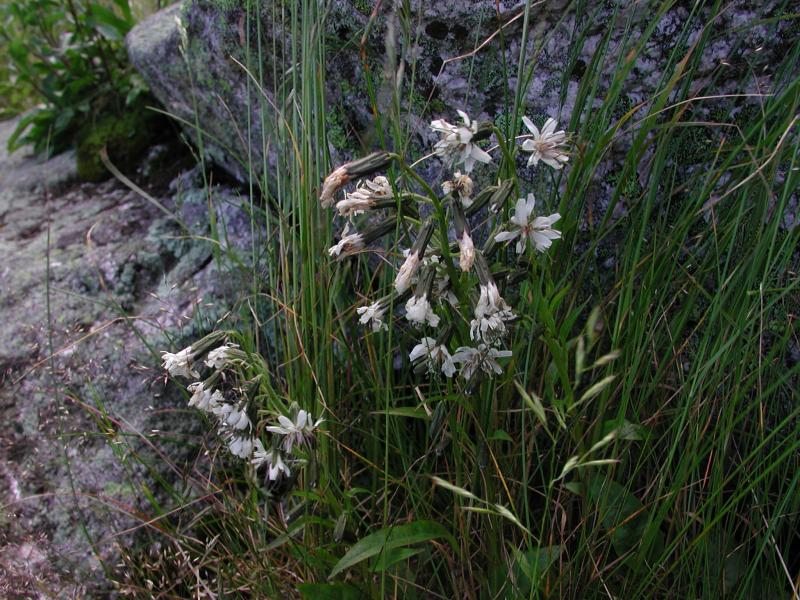 Boott's Rattlesnake-root is restricted to the northeastern United States where it only grows on a few mountain summits in New York and New England. The genus name comes from the Greek "prenes", drooping, and "anthe", flower, and it describes the habit of the flower (Fernald 1970). It is named after John Wright Boott (1788-1845) who first collected the plant in 1829 in the White Mountains of New Hampshire (Fernald 1970, Wallner and DiGregorio 1997).

There are six known populations in New York with only one that has over 500 individuals and two that have under 50. This species is globally limited in number of individuals and in extent of range being endemic only to the mountains of New England and New York.

In the past 20 years or so populations appear to have remained stable or to have fluctuated up and down slightly. These data may be somewhat inaccurate due to the difficulty of noticing and assessing all basal rosettes as well as the different levels of survey effort.

No populations are known to have become extirpated but there are no other clear data indicating what the long-term trends are for this species.

Although this species appears to do well and even thrive in disturbed areas it is unclear how human disturbances will impact this species in the long term. In some areas it is clear that trampling by hiker traffic has damaged populations. Many of the populations are in areas where trampling by hikers as well as other human created disturbances exist and unless it is clearly proven that these types of impacts are not damaging populations they should be considered threats.

This species should be looked for in all alpine summit areas.

In New York, this species is restricted to a few of the highest peaks in the Adirondacks and grows in the alpine zone. In this area, plants occur in open grassy meadows, near rock outcrops, in seeps at the bases of cliffs, adjacent to krummholz, on ledges and crevices in cliffs, and along trails. It is also known from around buildings, a rock wall of a parking lot, and disturbed areas in the alpine zone (New York Natural Heritage Program 2007). Alpine areas above treeline, mountains (Bogler 2006). Alpine regions (Fernald 1970).

In New York this species is restricted to only a few of the highest peaks of the Adirondacks.

This species is endemic to only a few high peaks in Maine, New Hampshire, Vermont, and New York (Bogler 2006).

Boott's rattlesnake-root is a low growing herb. It forms whorls of leaves at ground level from a short taproot. It may take an individual plant some number of years to produce a flowering stalk and flowers. After that time the plant dies. New offshoots are sometimes produced from the roots and these become separated from the original plant to form new clones. Leaves are simple and not lobed or divided. The leaf base is arrow-shaped. The flowering stalks, which are up to 10 inches tall are either straight or have bases which trail along the ground. The bright white flowers are small, with the styles conspicuously longer than the petals, and occur in groups (heads) surrounded by dark green to black phyllaries. There are 10-20 mostly nodding heads per plant. The fruits have fine hairs at the summit similar to dandelions (Popp 1995, Bogler 2006).

Prenanthes boottii has flowering stems distally pubescent. The proximal leaves have blades deltate to ovate with the bases sagitate to hastate and the margins at most weakly dentate. Involucral bracts (including the outer series) are glabrous and black to dark green. There are 9-20 white florets per head and 10-20 heads per plant. The pappus is pale yellow (Bogler 2006).

As with most other Prenanthes species, P. boottii is difficult if not impossible to identify vegetatively.

Prenanthes altissima, which can occasionally grow in high elevation sites, has only 4-6 florets per head as opposed to 9-20 for P. boottii.

Prenanthes trifoliata and P. nana, which are sometimes lumped under P. trifoliata, differ from P. boottii in having the stems entirely glabrous (except sometimes P. trifoliata has stems distally pubescent), at least the proximal leaves deeply lobed, the involucres attenuate at the base, and 8-13 cream-colored ray flowers per head. Prenanthes boottii has the stems distally pubescent, the proximal leaves at most slightly dentate, the involucres rounded at the base, and 9-20 bright white ray flowers per head (Fernald 1970, Haines 1998, Bogler 2006).

To properly identify and easily spot this species it should be sought when it is in bloom. Therefore, the best time to survey for this species is from late-July through mid-August.

The time of year you would expect to find Boott's Rattlesnake Root vegetative, flowering, and fruiting in New York. 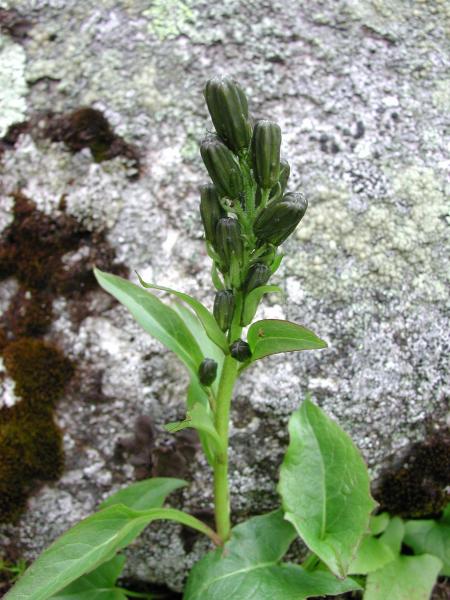 Recent molecular work has revealed that Prenanthes is polyphyletic (Kim et al. 1996). Morphological evidence suggests that North American species are quite distinct from Old World species and therefore the old genus name of Nabalus would be used for North American species of Prenanthes (Arthur Haines, personal communication in St. Hilaire 2004). Bogler (2006), in the recent Flora of North America treatment believes more sampling needs to be done before this change should be accepted.

Kim, S.-C., D.J. Crawford, and R.K. Jansen. 1996. Phylogenetic relationships among the genera of the subtribe Sonchinae (Asteraceae): Evidence from its sequences. Systematic Botany 21: 417-432.

Popp, B. 1995. A botanist's look at our common thread. Prenanthes boottii. Prenanthes. A newsletter on alpine areas of the Northeastern United States 1(1): 6-7.