The species name comes from the resemblance of this orchid's leaves to the leaves of Lily of the Valley in the genus Convallaria (meaning a valley). A touch of the flower column triggers a squirt of a pollen-filled liquid that sticks to the pollinator insect's back. After the dust-like seeds mature and disperse they grow underground for 2-3 years before producing leaves.

There is one known population and a second population that was reported around 1980. There have been 13 historical reports, but most of these sites have not been surveyed recently. There is a lot of additional habitat available that needs to be searched, but even if all populations were discovered this plant will likely still be considered rare in New York.

New York is at the southern edge of the range of this orchid. This orchid has always been rare in New York. Sightings are infrequent, but the habitat where this orchid is found is sometimes difficult to survey yet they are typically well-protected.

As a plant that has always been rare, a long-term assessment is difficult. The number of populations appears to be relatively stable. Targeted surveys may locate additional populations, but this small plant is difficult to find. There is plenty of suitable and high quality habitat available within the Adirondacks and Tug Hill, so there is the potential that we will find more populations over time. These populations would not necessarily indicate an increasing trend though, but reflect a better ability to locate populations that likely have been present all along.

Today there are few threats that impact this species. Run-off may have some impact, but this is not well studied. Much of the habitat where this plant might be found is either protected on public land or subject to wetland protection laws.

This orchid appears to be restricted to the Adirondacks and Tug Hill region. More survey work is needed to determine its distribution within these areas.

In eastern North America, this species ranges from Newfoundland to southern Quebec, southern Ontario, and northeastern Minnesota, south to the northern sections of Wisconsin, Michigan, New York, Vermont, and Maine. In western North America, this ranges from southern British Columbia south to the high elevations of California, Arizona, Neveda, Utah, and Colorado. It is disjunct to South Dakota and scattered locations occur in northern British Columbia and the Aleutians.

Broad-lipped twayblade is only 5-10 inches tall with two, opposite, elliptic to nearly round, green leaves that are perpendicular to the stem. The stem above the leaves is whitish glandular hairy with up to 20 flowers that have a small lance-shaped leaf at the base of each flower stalk. The small green sepals and petals bend back from the dominant lip that is about 3/4" long, light green with a darker green center, narrow at the base and wide at the tip. Two shallow lobes at the tip make the lip resemble the folded wings of an insect. Sometimes there is a small tooth between the lobes. Reproduction by runners sometimes produces large colonies of plants.

This small orchid is 10-30 cm tall. The ovate leaves are typically 3-5 cm long, but may reach 7 cm in some individuals. The rachis (main axil of inflorescence), pedical, and ovary are glandular and hairy. There may be up to 20 flowers per inflorescence, with greenish lips. The lip is about 9-10 mm long and 5 mm wide at the summit. The lip narrows near the base and has a pair of short (often obscure) teeth. The column is 2.5-4 mm long.

Listera cordata and Listera australis have a lip that is cleft, with the lip having linear segments, and a column that is less than 1.5 mm long. Listera auriculata has a lip that has a broad base with lobes near the base that curve around and clasp the column. There is a known hybrid between Listera auriculata and Listera convallarioides (Listera x veltmanii) that is indeed intermediate between these two parents. This hybrid has lobes near the base of the lip, but these lobes project away from the column. This hybrid may also back-cross with either parent. The hybrid should be sought where both parents are thought to be in close proximity.

This plant flowers from June to July, with fruits persisting until October. Surveys are best conducted when this plant is in flower.

The time of year you would expect to find Broad-lipped Twayblade flowering and fruiting in New York. 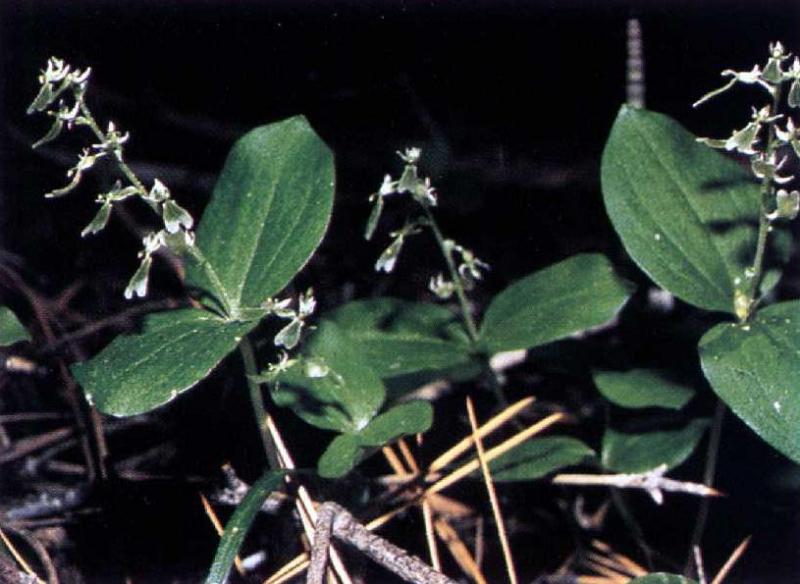