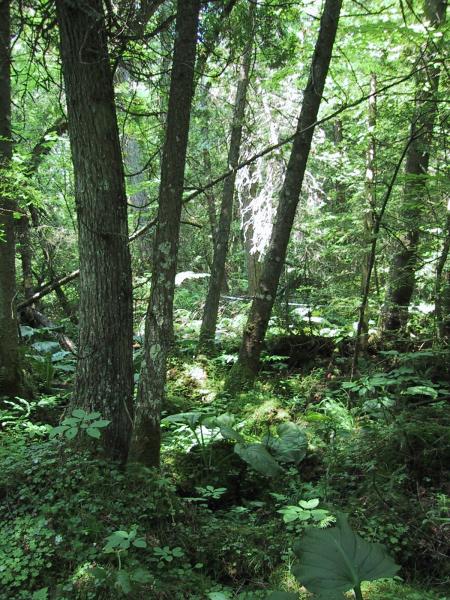 White-tailed deer spend much of their time during the winter months in northern white cedar swamps, munching on their favorite winter food. Northern white cedar is not regenerating well in some of these swamps due to this over browsing.

There are several hundred occurrences statewide. Some documented occurrences have good viability and many are protected on public land or private conservation land. This community is scattered and essentially limited to the northern half of the state, and includes several large, high quality examples. The current trend of this community is probably stable for occurrences on public land, or declining slightly elsewhere due to moderate threats that include alteration of the natural hydrology (primarily by beaver) and invasive species.

The number and acreage of northern white cedar swamps in New York have probably declined slightly, or remained stable, in recent decades as a result of wetland protection regulations. A few examples may have declined due to flooding by beaver.

The number and acreage of northern white cedar swamps in New York have probably declined substantially from historical numbers likely correlated with agricultural and development.

Northern white cedar swamps are threatened by development (e.g., agriculture, residential, roads, railroads), habitat alteration (e.g., excessive logging, sediment/pollution run-off, plantations, trash dumping), and recreational overuse (e.g., hiking trails, horse trails, ATVs, campgrounds). Alteration to the natural hydrological regime is also a threat to this community (e.g., impoundments, blocked culverts, beaver). Several northern white cedar swamps are threatened by invasive species, such as Berberis thunbergii, Frangula alnus, Solanum dulcamara, Tussilago farfara, and Rhamnus cathartica. Timber harvest is a threat at some sites, because white cedar is naturally resistant to rot. It has been used for shingles and posts, and is a valuable tree for wood products (Sorenson et al. 1998), thus making this community an important source for this tree. Northern white cedar swamps that have black ash (Fraxinus nigra) may be threatened by emerald ash borer. The emerald ash borer (Agrilus planipennis) is an Asian beetle that infests and kills North American ash trees. All native ash trees are susceptible, including white ash, green ash, and black ash. In New York, emerald ash borer has been found mostly south of the Adirondack Mountains, but in 2017 it was recorded in Franklin and St. Lawrence Counties. Natural communities dominated or co-dominated by ash trees, such as black ash in northern white cedar swamps for example, would likely be most impacted by emerald ash borer invasion.

This community is scattered and essentially limited to the northern half of the state. It is concentrated in the Great Lakes Ecoregion, but also common in the Adirondack Subsection of the Northern Appalachian Ecoregion where it is represented by large patch occurrences. There are scattered very small patch examples at the northern fringe of the Lower New England Ecoregion, Tug Hill Subsection of the Northern Appalachian Ecoregion, and the High Allegheny Plateau Ecoregion.

The range of this community is probably limited to the Northeast United States and Great Lakes basins, and southeastern Canada. The range is estimated to span north to central Ontario and Quebec, west to Minnesota, south to the Southern Tier of New York, and east to New Brunswick.

A rich conifer or mixed swamp that occurs on organic soils in cool, poorly drained depressions in central and northern New York and along lakes and streams in the northern half of the state. These swamps are often spring fed or enriched by seepage of cold, minerotrophic groundwater, resulting in a stable water table and continually saturated soils. The characteristic tree is northern white cedar (Thuja occidentalis), which makes up more than 30% of the canopy cover; characteristic short shrubs include dwarf raspberry and red osier dogwood. The surface of the peatland typically has small mounds and depressions called hummocks and hollows that are formed by decaying downed trees and tip-up mounds. Mosses and liverworts are diverse and abundant.

A forested peatland that is characterized by northern white cedar, which makes up 30% or more of the tree canopy and tall shrub cover.

Known examples of this community have been found at elevations between 100 feet and 1,909 feet.

Northern white cedar, hemlock, balsam fir, and red maple are often found in a northern white cedar swamp; the striking contrast between the evergreens and the red maple's seasonal color can be enjoyed in the fall. The community also contains a number of herbaceous species that bloom in the spring (starflower, bunchberry, Canada mayflower, and blue bead lily) as well as a diverse assortment of mosses and liverworts that are beautiful year-round. 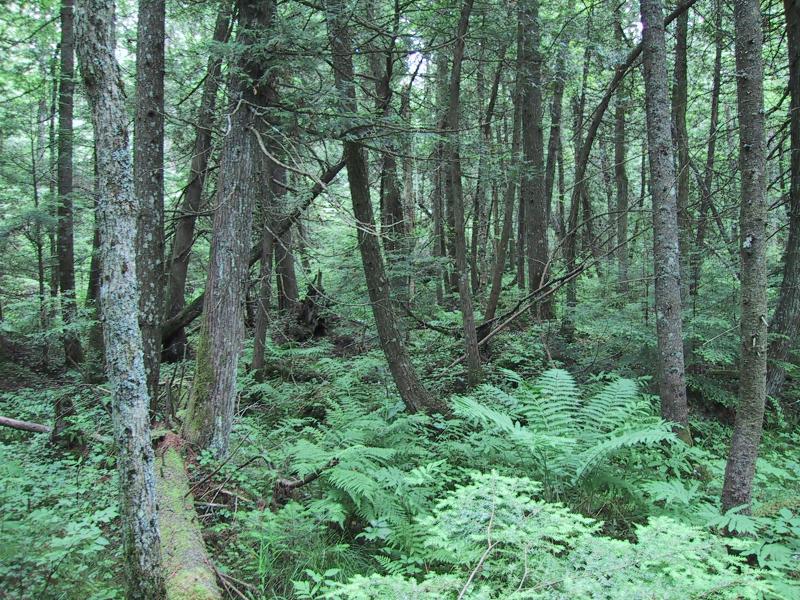 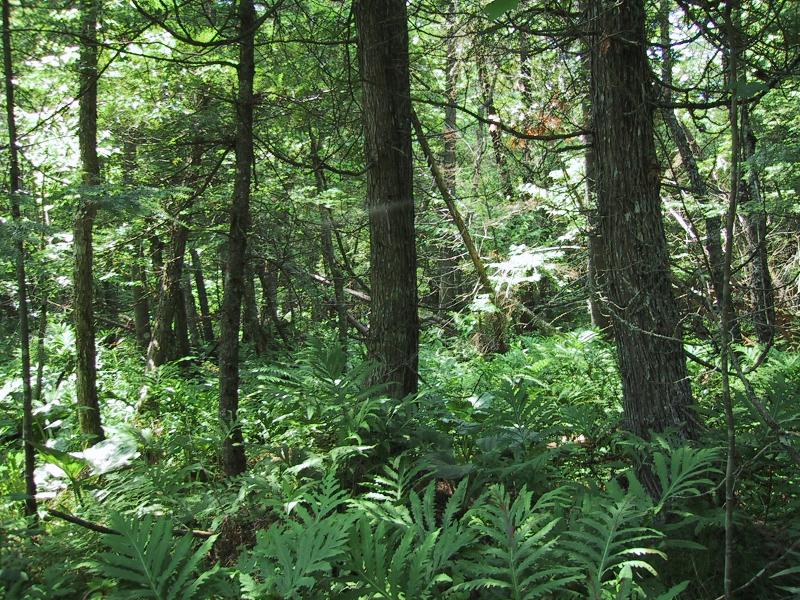 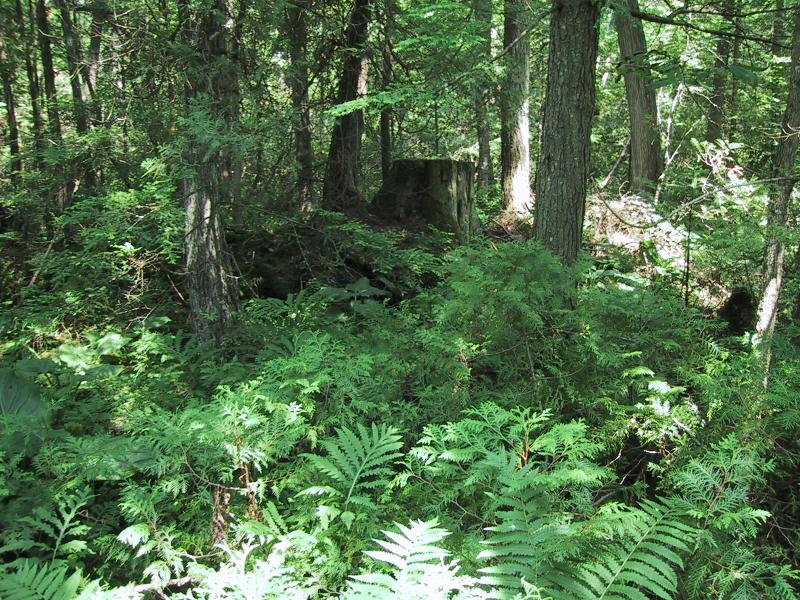 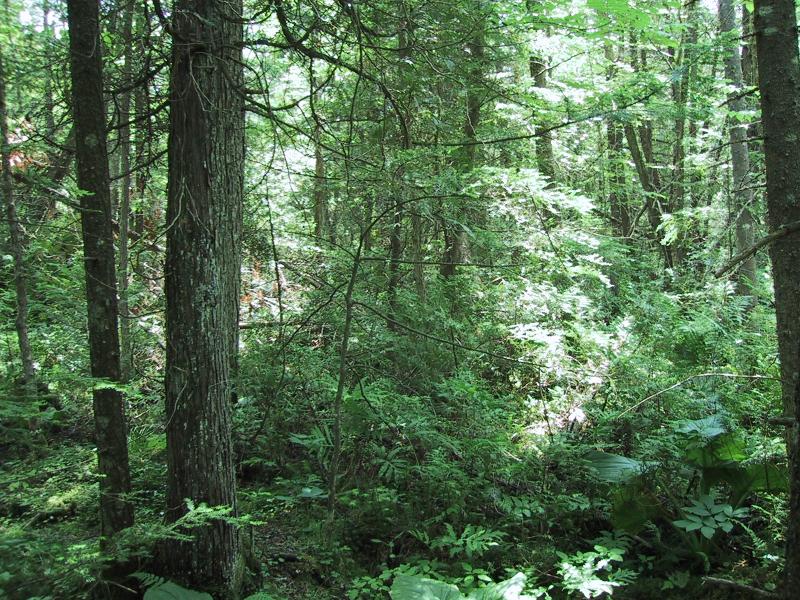 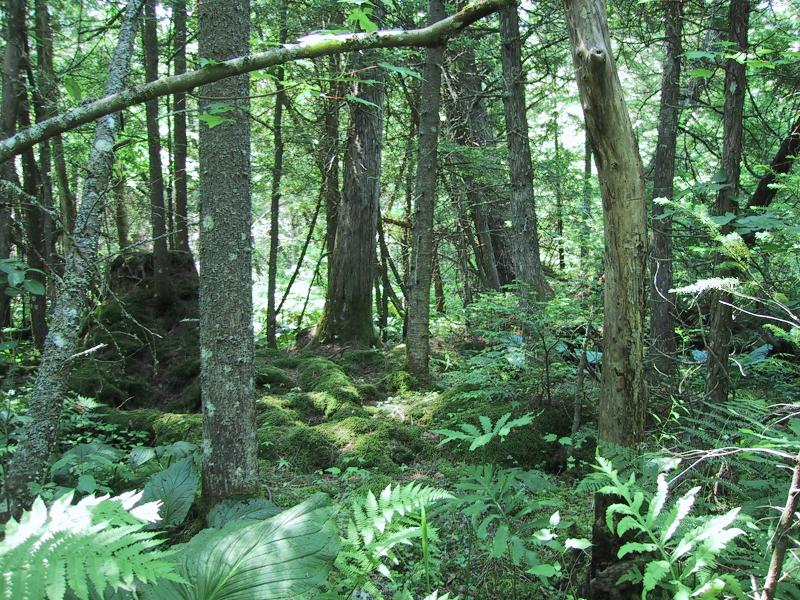 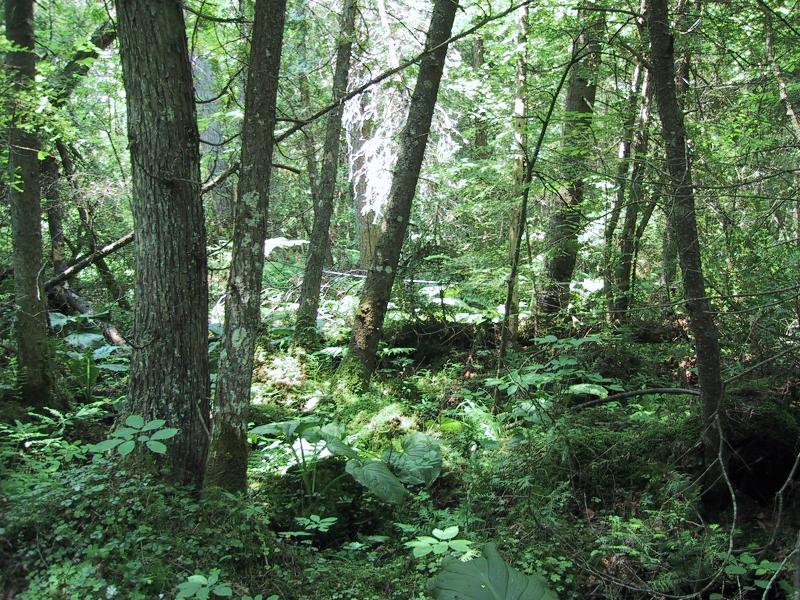 This figure helps visualize the structure and "look" or "feel" of a typical Northern White Cedar Swamp. Each bar represents the amount of "coverage" for all the species growing at that height. Because layers overlap (shrubs may grow under trees, for example), the shaded regions can add up to more than 100%.

Anderson, K.L. and D.J. Leopold. 2002. The role of canopy gaps in maintaining vascular plant diversity at a forested wetland in New York State. Journal of the Torrey Botanical Society 129(3), 238-250.