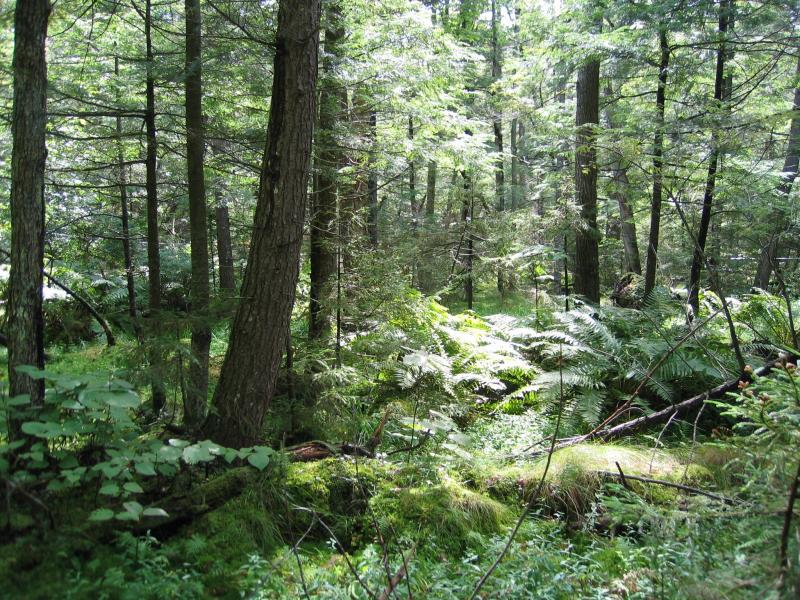 The hemlock woolly adelgid (Adelges tsugae), an exotic aphid-like insect, has become a serious threat to the eastern hemlock. These insects feed on the sap of the youngest branches of hemlock, where the needles attach to the twig. The adelgids inject a toxic saliva into the plant as they feed, killing existing needles and interfering with the tree's ability to produce new ones. If it is not controlled, the infected trees may die in three to four years. This would greatly alter the composition and function of hemlock-hardwood swamps.

The number and acreage of hemlock-hardwood swamps in New York have probably declined slightly, or have remained stable, in recent decades as a result of wetland protection regulations.

The number and acreage of hemlock-hardwood swamps in New York have probably declined substantially from historical numbers likely correlated with agricultural and other development.

Where practical, establish and maintain a natural wetland buffer to reduce storm-water, pollution, and nutrient run-off, while simultaneously capturing sediments before they reach the wetland. Buffer width should take into account the erodibility of the surrounding soils, slope steepness, and current land use. Wetlands protected under Article 24 are known as New York State "regulated" wetlands. The regulated area includes the wetlands themselves, as well as a protective buffer or "adjacent area" extending 100 feet landward of the wetland boundary (NYS DEC 1995). If possible, minimize the number and size of impervious surfaces in the surrounding landscape. Avoid habitat alteration within the wetland and surrounding landscape. For example, roads and trails should be routed around wetlands, and ideally should not pass through the buffer area. If the wetland must be crossed, then bridges and boardwalks are preferred over filling. Restore hemlock-hardwood swamps that have been unnaturally disturbed (e.g., remove obsolete impoundments and ditches in order to restore the natural hydrology). Prevent the spread of invasive exotic species into the wetland through appropriate direct management, and by minimizing potential dispersal corridors, such as roads.

Hemlock-hardwood swamps are found throughout upstate New York, north of the coastal lowlands/north Atlantic coast, except perhaps in localized regions such as the High Peaks area of the Adirondacks. The community is apparently concentrated in the lower New England and high Alleghany regions. Large occurrences are found on the Tug Hill. Small, scattered examples occur in the rest of the northern Appalachian region and throughout the Great Lakes plain.

The range of this community is probably widespread throughout much of the northeastern United States and the southern fringe of Canada. The range is estimated to span north to southern Ontario, west to Wisconsin, southwest to Kentucky and Tennessee, southeast to North Carolina and Virginia, and northeast to Nova Scotia.

A closed-canopy mixed species swamp with hemlock as a dominant, located within a groundwater-fed depression. The understory is sparse, and may include highbush blueberry, great rhododendron, winterberry, and cinnamon fern.

Known examples of this community have been found at elevations between 280 feet and 1,850 feet.

During the summer, hemlock-hardwood swamps are accented with the beautiful pink flowers of great rhododendron, ripe highbush blueberries, or the spicy aroma of sweet pepperbush flowers. The hardwood and understory foliage turn brilliant colors in the fall, and provide a dramatic contrast to the dark green of the hemlock. 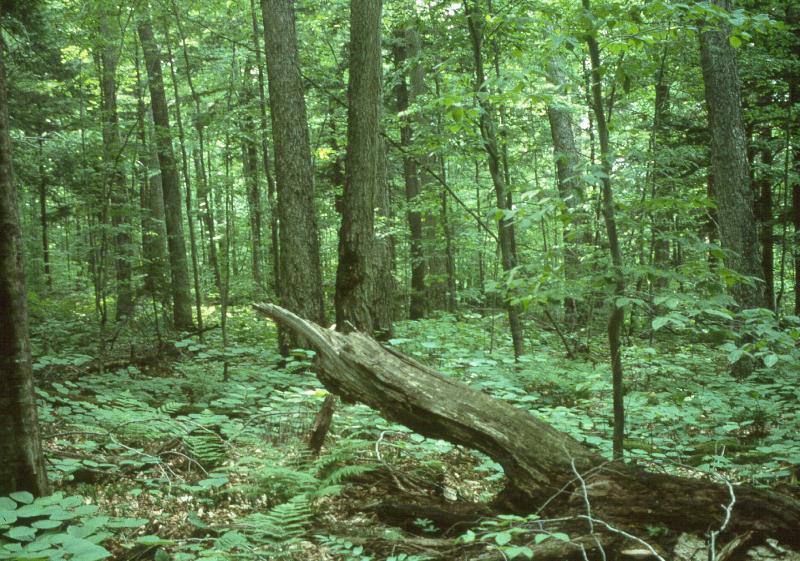 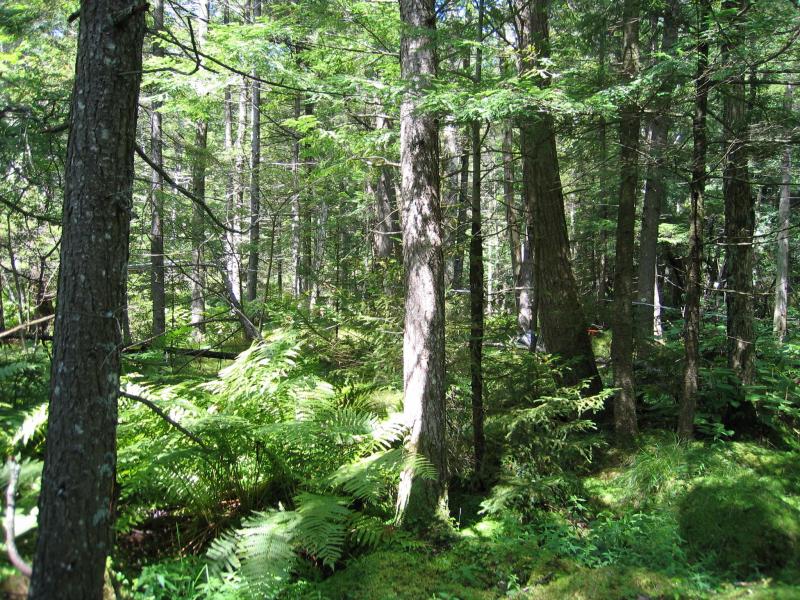 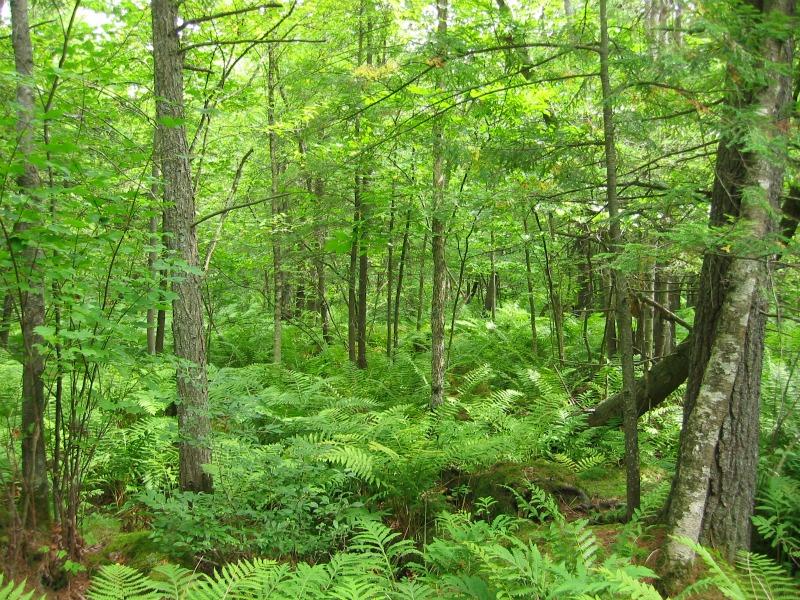 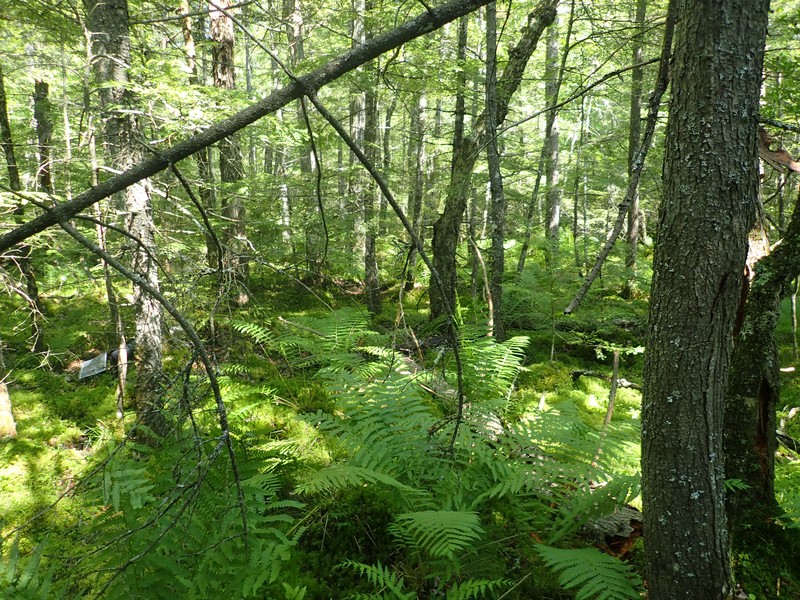 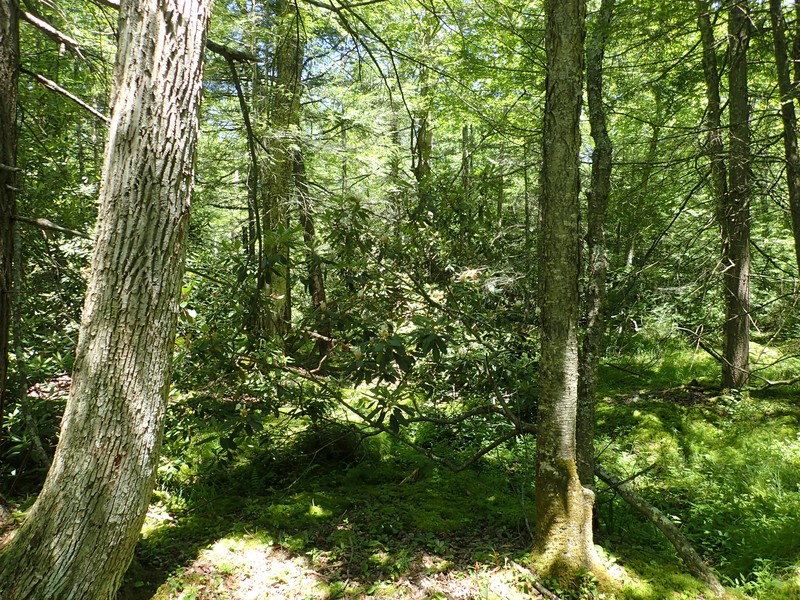 This figure helps visualize the structure and "look" or "feel" of a typical Hemlock-Hardwood Swamp. Each bar represents the amount of "coverage" for all the species growing at that height. Because layers overlap (shrubs may grow under trees, for example), the shaded regions can add up to more than 100%.