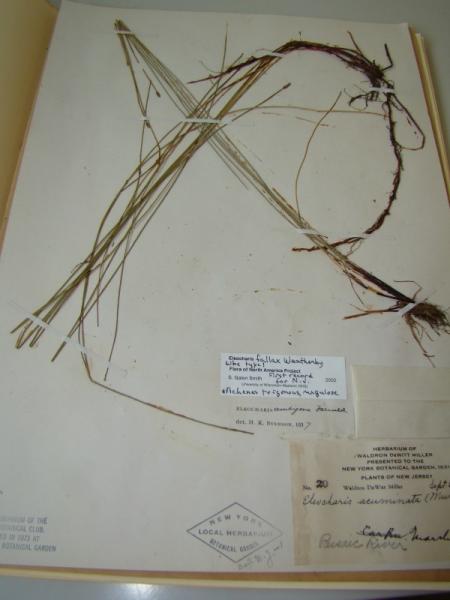 The species name fallax is Latin for deceitful or deceptive and its common name in some states is deceitful spike-rush. This refers to its close relationship to other similar species and the difficulty of telling them apart (Flora of North America Editorial Committee 2002). Another of its common names, creeping spike-rush, is also used for the more common Eleocharis palustris.

There are 2 existing very small populations which may be threatened by Phragmites and overuse of the surrounding wetlands. There are four occurrences from the early 1900s which have not been rediscovered.

Follow-up surveys have not been done to gather data about short-term trends.

This plant has always been very rare in New York but not enough data has been gathered to understand long-term trends.

Phragmites is a threat in the marshes where this occurs.

This species has had a confusing taxonomic history and herbarium specimens of all closely-related species should be examined to determine if more populations exist. Research could also be done to help augment existing populations.

Only two New York sites with Eleocharis fallax have been described; one was an artificial, weedy wetland adjacent to a wastewater treatment plant, and the other an open wetland adjacent to small pond. More information on the habitat requirements of Creeping Spikerush in New York is needed (New York Natural Heritage Program 2010). Fresh to brackish pond and lakeshores, marshes (FNA 2002). Fresh and brackish swamps along the coast (Gleason and Cronquist 1991).

This spikerush is currently known only from Suffolk County on Long Island with one historical record from the Bronx and one from Ulster County.

This spikerush is most common on the coastal plain in New Jersey and Delmarva Peninsula with scattered populations south to Florida and Alabama. It extends to the west to Louisiana and a couple of counties in eastern Texas where it is rare. There are a few rare populations in southeastern New York and southern New England.

Spikerushes consist of a simple stem (the leaves bladeless and inconspicuous), with the infloresence consisting of a solitary, many-scaled spikelet at the top of the stem. The perianth (sepals and petals), if present, is reduced to bristles. The base of the style is expanded into a tubercle, and is usually persistent on the fruit (achenes). Eleocharis fallax is a perennial, mat-forming species with long rhizomes. The stems are round (often ridged in dry specimens), and 30 to 75 cm tall, with purplish bases. The leaf-sheaths are persistent with obtuse, firm, red tips. The spikelets are egg-shaped to rounded and 5 to 12 mm tall, and the floral scales are deciduous. There are 1 to 5, brown, stout, perianth bristles, unequal in length but none exceeding the achene. The achenes are either compressed 3-sided or thickly biconvex, with evident angles, and have an evidently pitted surface. The tubercles are whitish-brown, pyramid-shaped, and not depressed. (FNA 2002, Gleason and Cronquist 1991)

Specimens with complete stems and mature, intact fruits are needed for identification.

Creeping Spikerush's fruits mature in July and persist into October.

The time of year you would expect to find Ambiguous Spike Rush fruiting in New York.

Information for this guide was last updated on: January 26, 2012