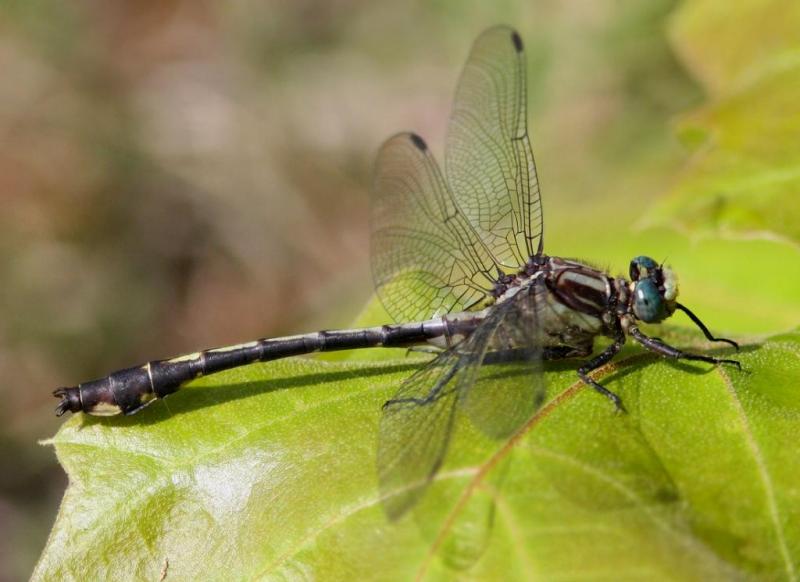 Septima's Clubtail was recently petitioned for possible Federal Endangered Species listing, but only in the southeastern US, thus bypassing protection for the Delaware River endemic, delawarensis.

This odonate is known only from a short stretch of the upper Delaware River. Directed collection efforts in 1994 and 1995 for the (sub)species description removed as many as 80 adults, suggesting the species was abundant at this time (Donnelly and Carle, 2000). Besides a single probable observation in 2008 near Port Jervis, there had been no more verified records in New York until 2014, when a small number of exuviae (shed skins) were again detected at two different known sites. This taxa is considered one of most at-risk odonates in the entire lower 48 sates (Bick 2003).

Presumably there was little survey effort on the upper Delaware between the mid-1990s and the NY Dragonfly and Damselfly Survey in the late 2000s. But between 2005-2010 there were at least 11 different surveys in four different years along the known stretch of river during the appropriate flight period. These experienced surveyors turned up only a single photograph of a possible adult female (White et al. 2010). While few of the surveys specifically targeted exuviae, it is safe to assume that if the species was anywhere near as abundant as in the 1990s, adults should have been detected.

As in Alabama (Krotzer, 2002) this closely related species has re-appeared in New York after 20 years of not being detected, though in much reduced numbers. Clearly a marked decline has occurred since the species was first discovered in the 1990s and the removal at this time of large numbers of breeding individuals (Donnelly and Carle, 2000) may have been detrimental to the viability of this small endemic population.

Donnelly (1993) described how New York City water supply dams on the headwaters of the east and west branches of the Delawarer River likely negatively affect sediment (i.e., larval habitat) dynamics far downstream. At the same time, much of the inhabited stretch of the river is currently being managed as a coldwater trout fishery, through increased dam releases (of cold reservoir water) to lower river temperatures in summer. Invasive Japanese Knotweed has become well established along the shoreline, including areas used for spring emergence, although at present it is unclear what the effects, if any, dense stands of this plant have on this species.

There is a presumed uninhabited stretch of about 65 Km between Callicoon, the northern-most known locale on the upper Delaware to Downsville in Delaware County on the east Branch, where a male and a female were collected in 1995 (Donnelly and Carle, 2000). Further inventory along this stretch as well as along the west Branch, north of Hancock and the Beaverkill (upstream of the confluence with the East Branch) is urgently needed. The effects of managing the upper Delaware River as a coldwater trout sport fishery (via hypolimnial water releases from the upstream NYC water supply dams) should be investigated. In addition, the possible effects of the establishment of dense stands of invasive Japanese Knotweed (Fallopia japonica) along the riverbanks may alter ecological processes along this reach of the river.

This taxa is sorely in need of taxonomic revision to full species status (see Donnelly and Carle, 2000).

The Delaware River Clubtail occupies moderate to large wooded rivers with some current, usually cobbly, but with finer sand and silt for larval habitat.
The larvae are though to inhabit relatively deep pools, either immediately downstream of rapids, or a tributary, especially where some fine mixed sediments have been deposited. Adults extensively use riparian forests for maturation, feeding and copulation.

It occurs only in the upper Delaware River along the New York/Pennsylvania border between Callicoon and Pond Eddy, a stretch of about 60 km. In the mid 1990s two adults were observed northward at the Pepacton Reservoir on the East Branch of the Delaware in Delaware County, but the East and West branches of the river above Hancock do not appear to support a breeding population.

The overall distribution of both subspecies is highly disjunct. Gomphus s. septima, known only from Alabama, North and South Carolina, was first discovered in the 1930s. It was rediscovered in Alabama after a 20 year absence and is now known from approximately 16 rivers, most in the Piedmont of North Carolina, but also in Alabama (Krotzer 2002). The Delaware River endemic G.s. delawarensis was discovered in 1993; it occurs only in the upper Delaware River in New York, Pennsylvania and New Jersey from Mercer County New Jersey, north to the Pepacton Reservoir on the East Branch of the Delaware in Delaware County, a stretch of about 360 km.

This is a rather large dull green and brown dragonfly with the lateral thoracic stripes nearly absent, no black facial stripes, and a small abdominal club which has small pale lateral spots. Mature larvae are larger than most other Gomphids. Gomphus septima delawarensis is different enough from its close relative, G. s. septima that it could have been described as a separate species, rather than as a subspecies (see, Donnelly and Carle, 2000).

Adults look and behave similarly to the Midland Clubtail (Gomphus fraternus); older larvae are much larger than most other clubtails.

Although adults are elusive and have rarely been seen, some observations from the mid 1990s indicate that males spend time perched on rocks and logs at breeding habitats. Both sexes feed in nearby clearings where they rest on the ground and flat on leaves. Some fly high into the treetops to copulate, while other pairs remain low over the grass. This species often leaves the water during the heat of the day. Mating has been observed as late as 2:00 pm and oviposition even later. Females have been observed extruding eggs while perched on a rock, and then flying over the water in wide loops, tapping three times in 4-minute intervals and then flying into the treetops. Adults frequent regions of turbulent rapids with large emergent boulders, on which they often perch. Emergence occurs farther up on the river banks (1-2 meters) than most other Gomphids.

Larvae feed on smaller aquatic invertebrates and adults feed on insects which they capture in flight.

Exuviae (shed skins) and adults have been collected along the upper Delaware from May 24-June 25, with the great majority of records coming during the first half of June.

The time of year you would expect to find Delaware River Clubtail reproducing and larvae present and active in New York.

This dragonfly is currently considered a subspecies (delawarensis) of Gomphus septima, but it could have been described as a separate species (Donnelly and Carle, 2000). It awaits revision to full species status.

Carle, F.L. 1994. A survey of the Odonata of the Delaware River and its tributaries. US Fish and Wildlfie Service, NJ.