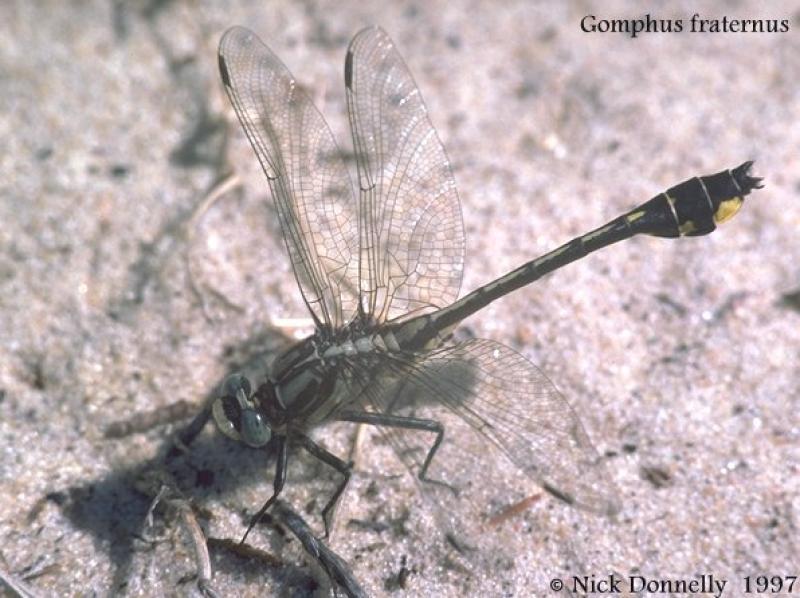 The Midland Clubtail has strong flight capabilities, which allow it to capture other dragonflies such as the Twelve-spotted Skimmer (Libellula pulchella) and the Eastern Pondhawk (Erythemis simplicicollis) as prey (Mead 2003).

The Midland Clubtail is known to occur in two locations in New York State, with no population estimates determined. Further survey efforts may result in the identification of additional populations or range expansions, and may enable population size estimations.

No estimation of population size for this species has been made based on observations from the late 1990s in Orange and Oneida counties (New York Natural Heritage 2007). General reports of observations made prior to this include locations in three additional counties, but information prior to the late 1990s is limited (Donnelly 2004). Therefore, any new location information on the Midland Clubtail in New York may reflect heightened interest in surveying for this species rather than a population increase or a range expansion (Holst 2005).

Recent observations have been noted in Orange and Oneida counties in the late 1990s. Long-term information regarding population size is not available prior to the late 1990s (New York Natural Heritage Program 2007). Since observations are fairly recent, and the full extent and size of the populations have not been determined, long-term trends are unclear.

Any activity which might lead to water contamination or the alteration of natural hydrology could impact Midland Clubtail populations (Holst 2005). Such threats might include roadway and agricultural run-off, industrial pollution, the building of dams, recreational boating, and development near their habitats (Natural Heritage Endangered Species Program 2003, Holst 2005).

Any efforts to reduce roadway and agricultural run-off, industrial pollution, flow manipulation, development of upland stream borders, and contamination of fast-flowing streams should be considered when managing for this species (Natural Heritage Endangered Species Program 2003, Holst 2005).

Further research is needed to define the distribution and population size of the Midland Clubtail. In addition, research is required to understand the habitat requirements and threats to this species, and to create appropriate management guidelines for its persistence in known locations (Holst 2005).

The Midland Clubtail inhabits medium to large, moderate to rapid-flowing rivers and streams with sandy and muddy substrate. They are also found in and around large lakes with emergent vegetation (Dunkle 2000, Nikula et al. 2003). Larvae are aquatic and found in the water during this lifestage, whereas adults are terrestrial and are found in habitats surrounding streams and lakes.

The Midland Clubtail is confirmed in locations from five counties in the western and southern portion of the state (Donnelly 2004, New York Natural Heritage Program 2007). The full extent of the population has not been determined.

As their name suggests, Clubtails have an enlarged tip on the end of their abdomens, giving them a club-like appearance. The Midland Clubtail belongs to the subgenus Gomphurus, which may be characterized by having the broadest clubs in the Clubtail family and their overall large size. The Midland Clubtail has a dark brown thorax with greenish yellow dorsal (top) stripes that form a rear-ward facing "U" pattern. They have a slender, blackish abdomen with a widened "club" at the end with yellow dorsal stripes on abdominal segments 3-7 and a yellow triangular spot on segment 8. There is often (not always) a little dorsal spot on segment 9 as well, but segment 10 is black dorsally. Also, there are yellow patches on the sides of the club portion of the abdomen (segments 8 and 9). Midland Clubtails are 1.9-2.2 inches in length. They have blue-green eyes and, as with all Gomphids, their eyes are separated dorsally. Male terminal appendages and female subgenital plates are distinctive from other Gomphus species when examined under magnification. Female Midland Clubtails have thicker abdomens than males, with a slightly narrower club. Both sexes have a yellow face and black legs; however, the hind thighs of the females often have a pale lateral (side) stripe.

Gomphid larvae spend much of their time burrowing into the substrate of streams and rivers where they are found. Adults are found perching on emergent rocks in rivers or on the banks or leaves at river edges (Nikula et al. 2003). Adult males maintain rapid and prolonged flights to patrol for females and often hover over open water (Dunkle 2000, Nikula et al. 2003). Adult females oviposit (lay eggs) by washing their abdomens in rapids or turbulent areas of rivers and lakes (Mead 2003).

Midland Clubtail larvae feed on smaller aquatic invertebrates and adults feed on insects which they capture in flight.

Adults are active from late May into mid-July (Natural Heritage Endangered Species Program 2003). Larvae may be found in appropriate habitats year-round.

The time of year you would expect to find Midland Clubtail present and reproducing in New York.

Information for this guide was last updated on: April 5, 2007