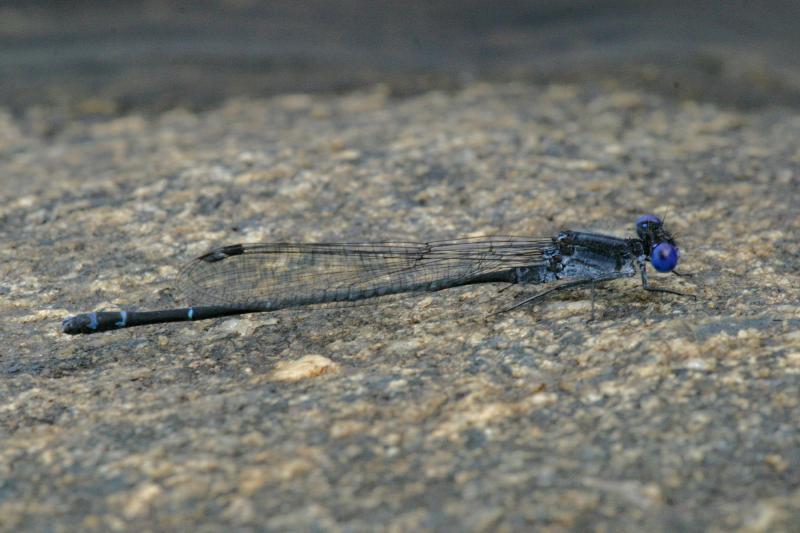 Dusky Dancers can be found in a variety of freshwater habitats, ranging from small to large rivers to wind-swept lakes (Lam 2004).

In New York, Argia translata was known from eight counties (Donnelly 1999) in the southern Hudson Valley and southern tier prior to the beginning of the New York Dragonfly and Damselfly Survey (NYDDS, 2005-2009). It was documented in 10 locations within five counties in this region of the state during the NYDDS (White et al. 2010).

In New York, Argia translata was formally known from eight counties (Donnelly 1999) in the southern Hudson Valley and southern tier prior to the beginning of the New York Dragonfly and Damselfly Survey (NYDDS, 2005-2009). It was documented in 10 locations within five counties in this region of the state during the NYDDS (White et al. 2010). Despite the increased survey effort during the NYDDS, county observations decreased which could be reflective of a population decline.

Any activity which might lead to water contamination or the alteration of natural hydrology could affect Dusky Dancer populations (NYS DEC 2005). Such threats may include roadway and agricultural run-off, industrial pollution, the building of dams, recreational boating, and development near their habitats (NYS DEC 2005). Groundwater withdrawal is a potential threat in lentic habitats, as are invasive plant species replacing native plants required for oviposition (New York Natural Heritage Program 2017). Both emergence rates and/or species ranges may shift for odonate species as a result of climate change (Corser et al. 2015).

Further research is needed to define the distribution and population size of the Dusky Dancer. In addition, research is required to understand the habitat requirements and threats to this species, and to create appropriate management guidelines for its persistence in known locations (NYS DEC 2005).

Dusky Dancer is restricted to the southern half of the state and has been documented in ten New York counties in the southern Hudson Valley and the southern tier (Donnelly 1999, White et al. 2010).

Dusky Dancer males have violet eyes and mostly black bodies with thin blue rings on the abdominal segments. The lower portion of his thorax is pale or powdery and immature males may have thin yellow shoulder stripes on the thorax. Females are polymorphic and light areas may be brown, greenish brown, or pale blue. They have eye spots and a long pale wedge splitting the black shoulder stripe (Lam 2004, Paulson 2011).

Dusky Dancer larvae feed on smaller aquatic invertebrates and adults feed on insects which they capture in flight.

Dusky dancer adults have been found in New York from June through the first half of September. Larvae may be found in appropriate habitats year-round.

The time of year you would expect to find Dusky Dancer present and reproducing in New York.