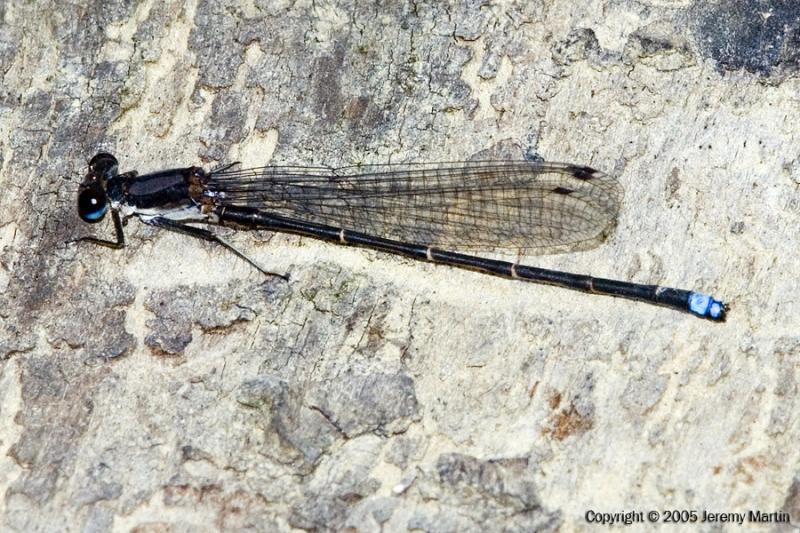 The blue markings on blue-tipped dancers and some other odonate species turn gray at cool temperatures (Dunkle 1990).

To date, this species has been recorded on just ten rivers or streams in just two regions of the state. Although it is highly likely that it will be found on additional waters, it is uncertain as to whether it will be found in additional drainages. There are a number of potential and likely threats to the lotic waters occupied by this species and there is virtually no information available on the linear extent of occupied rivers and streams or population sizes on these waters.

There is no information on population trends for this species at known locations, as nearly all of the sites have only recently been documented. It is not clear if this southern species is expanding its range northward or if the recent records simply reflect the general increase in survey efforts for odonates in general.

The fact that only one record was known historically and that a number of new locations for this southern species have been found in recent years, suggests that this species may be expanding its range to the north.

Little published information is available citing specific cases of negative impacts to vatious species of river dwelling odonates, but any activities which degrade the sensitive hydrology of these habitats would threaten populations of these species. The most important likely negative impacts would come from changes in the natural hydrology such as the building of dams, increases in sediment load of the river or stream (such as might result should logging occur down to the river edge), changes in dissolved oxygen content, direct effects of pesticides, and chemical contamination by runoff of agricultural or other discharge.

Research aimed at obtaining information on population size at occupied sites would be useful in determining the overall population for this species in the state. Research on larval habitat requirements may provide a better understanding of the species tolerance to various hydrological disturbances.

The blue-tipped dancer is predominantly a species of flowing waters including fast or slow-flowing rivers and streams. Although it also occurs at swamps and ponds in some parts of the range, all New York records to date are from flowing waters (Lam 2004, New York Natural Heritage Program 2006).

Based on existing records, the range of this species in the state is restricted to the Great Lakes and Lower Hudson drainages where it has been recorded from seven counties. It seems likely that the species will also be found in counties across the southern tier of the state as additional surveys take place.

The range of the blue-tipped dancer extends from Florida west to Texas, and north to Colorado, Minnesota, southern Ontario, New York and New Jersey (Dunkle 1990, Lam 2004)

Adult dancers are small, generally dark bodied damselflies distinguished from most other small damselflies by long spines on the legs. The wings are clear. Females may be further distinguished from other species of smaller damselflies by the lack of a spine beneath the 8th segment of the abdomen. Male blue-tipped dancers are mostly black with purple stripes on the thorax, and sky blue 9th and 10th abdominal segments. Females may be brown or blue with wide, black, shoulder stripes and abdomen mostly black. The overall body size of adults is from 1.2-1.5 in (30-38 mm) in length (Lam 2004). Larvae of the dancer species are typically short, stocky and flattened, with moderately large eyes and seven-jointed antennae. Three sets of oblong-shaped gills attach to the terminal end of the abdomen (Westfall and May 1996).

Although coloration of certain locations on the thorax and abdomen can usually to be used to identify adult dancers to the species level, examination of the terminal appendages at the end of the abdomen in males and characters of wing venation, spots on top of the head, and microscopic features of the thorax are definitive features used in taxonomic keys for female dancers (Westfall and May 1996, Lam 2004).

The species of dancers tend to perch on the ground more than other species of damselflies (Lam 2004). Although it often perches in sunny spots, the blue-tipped dancer is reported as perching on vegetation and in the shade more often than some other dancer species (Dunkle 1990). Dancers lay their eggs while in tandem and eggs are laid in floating vegetation, floating debris and wet wood above the water line (Lam 2004, Dunkle 1990).

Lam (2004) reports this species from early June through early September for New Jersey, while Donnelly (1999) gives the dates of June 27 through July 25, but the latter is based on only a few records. The majority of the recent records for New York are from July and August, with one from early September (New York Natural Heritage Program 2006). These dates indicate that the blue-tipped dancer may be more of a late summer species.

The time of year you would expect to find Blue-tipped Dancer present and reproducing in New York.