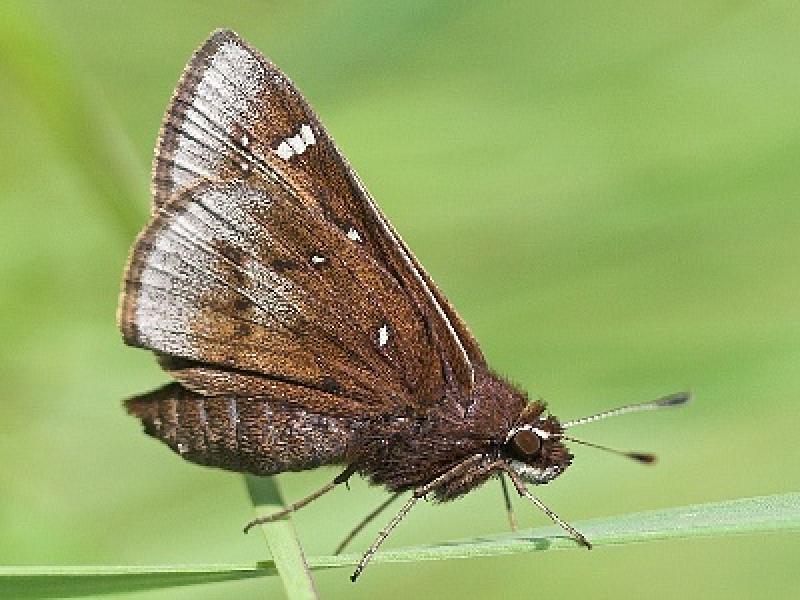 In New York, the dusted skipper is found along utility right-of-ways in pine barrens and other sandy habitats. It may also be found on rock outcrops in the New York City area.

Although there are likely to be only a few dozen occurrences in New York, the species does not appear to be threatened in the Upper Hudson Valley or on Long Island. It is apparently quite scarce in the more immediate New York City area.

The short-term trends indicate that the population is stable.

Although the long-term trend is unknown, there probably are fewer occurrences now than originally, even though the overall range in New York does not appear to have changed.

The main threat is habitat loss. Colonies are often found on utility right-of-ways and the management of these could be an issue for this species.

Unburned habitat (refugia) should be provided during prescribed burning where this species is known or suspected to occur.

The response of this species to the management practices at the Albany Pine Bush and in Saratoga County should be investigated.

In New York, the Dusted Skipper inhabits mostly openings and utility right-of-ways in pine barrens and other sandy habitats. This species also occasionally inhabits various types of rock outcrops in the New York City area. The adults are rarely seen more than a few feet from the larval foodplant [bluestem grasses, usually Little Bluestem (Schizachyrium scoparium), unless they are forced into adjacent habitats to find nectar.

The range includes the Albany Pine Bush north to the Saratoga sand plains, the New York City area north to Westchester County (Glassberg 1993), and Long Island. It could possibly turn up in other southeastern New York counties, as well.

The range is somewhat discontinuous from New Hampshire west across the Great Lakes states to southern Manitoba and the western Dakotas, eastern Wyoming, and central Colorado. It also ranges southward to the Gulf states and Texas (Opler and Krizek 1984, Stanford and Opler 1993, Opler 1994).

This species can be identified from a good image or any specimen. The pictures must show the forewing spots and should also include good images of the upper and undersides.

The habitat and time of year are strong clues for identifying this species. Compare illustrations of the Roadside Skipper (Amblyscirtes vialis) and females of Hobomok Skippers (Poanes hobomok) and Zabulon Skippers (Poanes zabulon) from any butterfly guide. The white spot near the base of the underside of the hindwing is diagnostic if present. Otherwise, note the white above the eyes, the relatively straight thin line of apical spots, and the details of the underside color and pattern. There is no orange or yellow present on any surface.

This species should be identified from adults, although an expert could identify the larva.

In New York the primary, and possibly exclusive, larval foodplant is Little Bluestem grass (Schizachyrium scoparium), but Big Bluestem (Andropogon gerardii) and other species of Andropogon grasses might also be used. The adults take nectar from a variety of native and non-native flowers including blueberry and other heaths, blackberry, and vetches.

The adults occur for about two or three weeks in the spring, usually beginning to appear by the end of May. The larvae are probably mature by September and hibernate fully grown or nearly so, with pupation in the spring.

The time of year you would expect to find Dusted Skipper reproducing, larvae present and active, and pupae or prepupae present in New York. 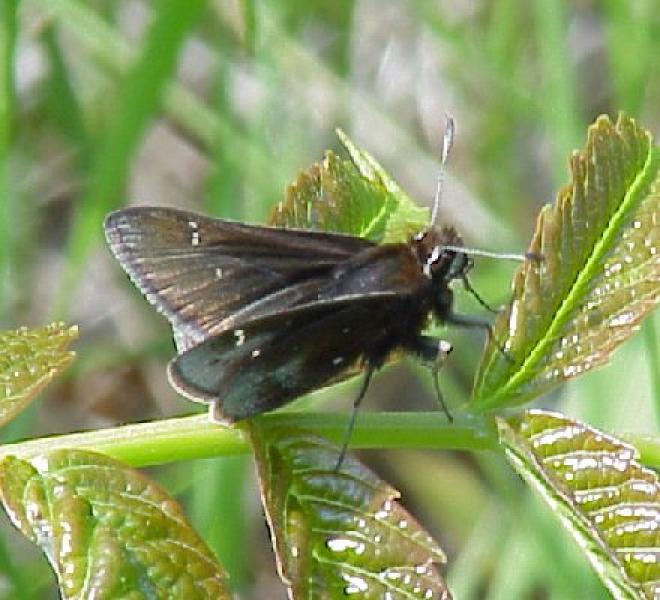