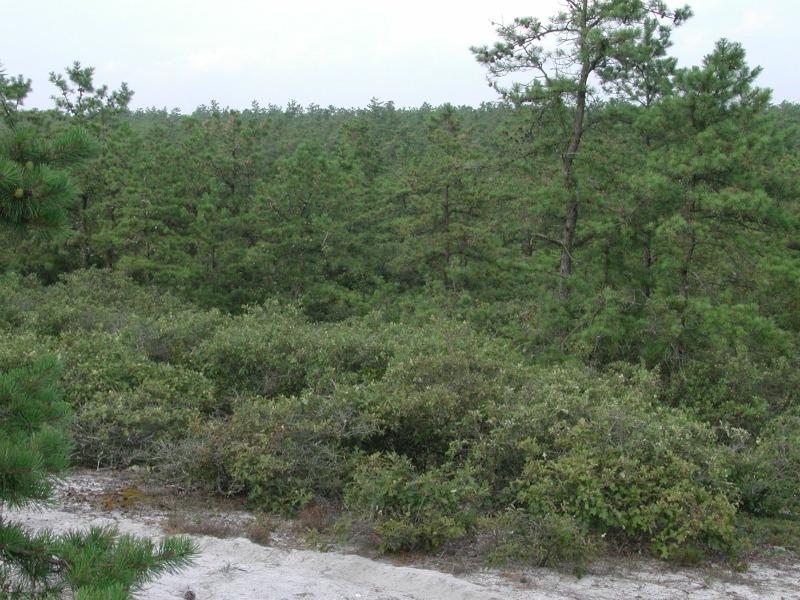 "Fire fight at sunrise! Drought-racked pine woods of Long Island's Suffolk county has worst wildfire in New York State for a century." That was the headline in the papers the summer of 1995. 7000 acres of pine barren forest burned over an 11 day period. 2000 firefighters came to fight the blaze. Two hundred members of the U.S. Forest Service's elite Hot Shot crews and fire management staff flew in from the West. There were minor injuries, some property damage, and luckily no deaths. The fire was named for the Sunrise Highway that passes through the pine barrens. But the pine barrens came back. Just one week after the Sunrise Fire, tiny green sprouts pushed up through the ashes that blanketed the base of scrub oaks. Two weeks after the fire, the pines began sending up sprouts. By October, those little oak sprouts had grown more than a foot tall (Beil 1995). Pine barrens are a fire dependent natural community. Periodic fires are necessary to maintain the unique species composition.

The dwarf pine plains natural community is restricted to the coastal lowlands in eastern Long Island. There is only one large, over 1000 acre, site for this community type in New York.

The acreage of dwarf pine plains in New York have probably decreased in recent decades as a result of residential and commercial development. Presently, there is only one large (about 1300 acres), albeit fragmented, occurrence of this community type.

The acreage of dwarf pine plains in New York have probably declined substantially from historical acreage. Although there is one very large occurrence on Long Island (about 1300 acres) it was probably much larger before settlement and development.

The major threat to this community is residential and commercial development of the land. Development of the land leads to fragmentation of the forest and fire suppression. This particular community is a "fire dependent" community. Periodic fires are necessary to maintain the unique species composition of this forest type. Southern pine beetle (Dendroctonus frontalis) is a bark beetle that infests pine trees, such as pitch pine, white pine, and red pine. Southern pine beetle is native to the southeastern United States, but its range has spread up the east coast to Long Island, New York in 2014. Natural communities dominated or co-dominated by pines would likely be most impacted by southern pine beetle invasion.

Soils are very thin within this community, and the effect of clearing and construction on soil retention and erosion must be considered during any development activities. Similarly, these soils are acidic and nutrient-poor and any soil enrichment contamination (e.g., from septic leach fields or fertilized lawns) can alter community structure and function. The open structure of this community is maintained by fire and presents a fire hazard to existing and proposed development. Unprotected structures located within or near this community are more susceptible to damage from fire.

Survey for other occurrences to advance the documentation and classification of pine barrens. In addition, quantitative data on community composition, especially herbs, lichens, invertebrates, and small mammals are needed.

Research is needed to determine optimal fire regime for this community. Assess how human alterations in the landscape affect pine barrens.

The dwarf pine plains natural community is restricted to the coastal lowlands in eastern Long Island. There is only one large (1300 acre) site for this community type in New York.

The New York dwarf pine barrens on Long Island is the only known location of this particular community type. There is, however, a taxonomic overlap with other pine barrens associations occurring on Cape Cod and Nantucket, Massachusetts and possibly New Jersey. Pine barrens, in general, are rare and threatened throughout their range (NatureServe 2009).

This is a woodland community dominated by dwarf individuals of pitch pine (Pinus rigida) and scrub oak (Quercus ilicifolia) that occurs on nearly level outwash sand and gravel plains in eastern Long Island. The soils are infertile, coarse textured sands that are excessively well-drained. The canopy of dwarf pitch pines and scrub oaks is generally from 1.2 to 2.4 m (4 to 8 ft) tall, and it may form a dense thicket. The community includes very few species of vascular plants.

This natural community is mainly identified by the dwarf individuals of pitch pine and scrub oak and by topographical location on nearly level outwash sand and gravel plains in eastern Long Island.

Known examples of this community have been found at elevations between 20 feet and 120 feet.

The best time to see this natural community is in the spring, when the weather is favorable and there is a chance to see and hear birds such as prairie warbler (Dendroica discolor) and brown thrasher (Toxostoma rufum); two species that favor this habitat for breeding. 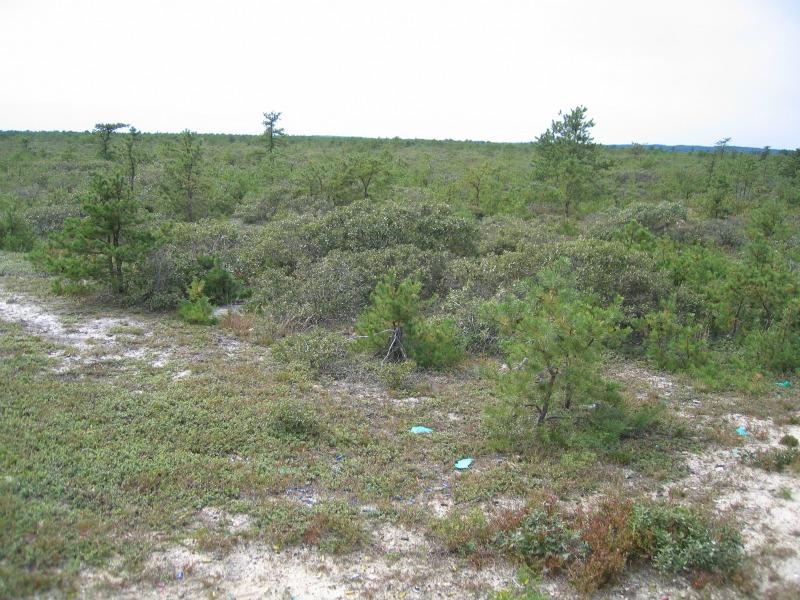 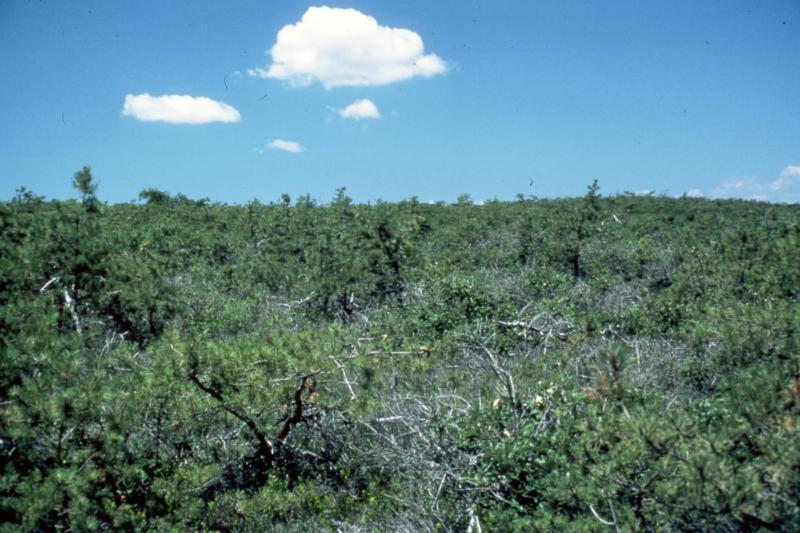 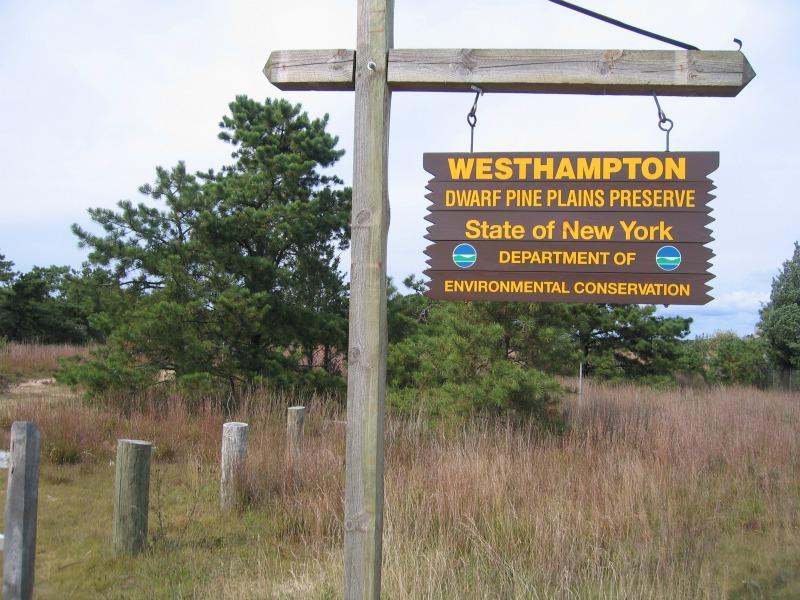 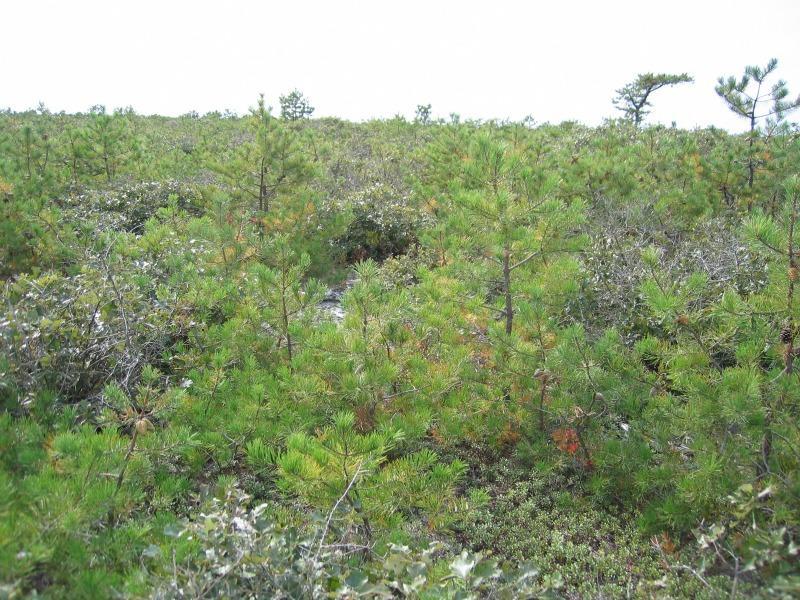 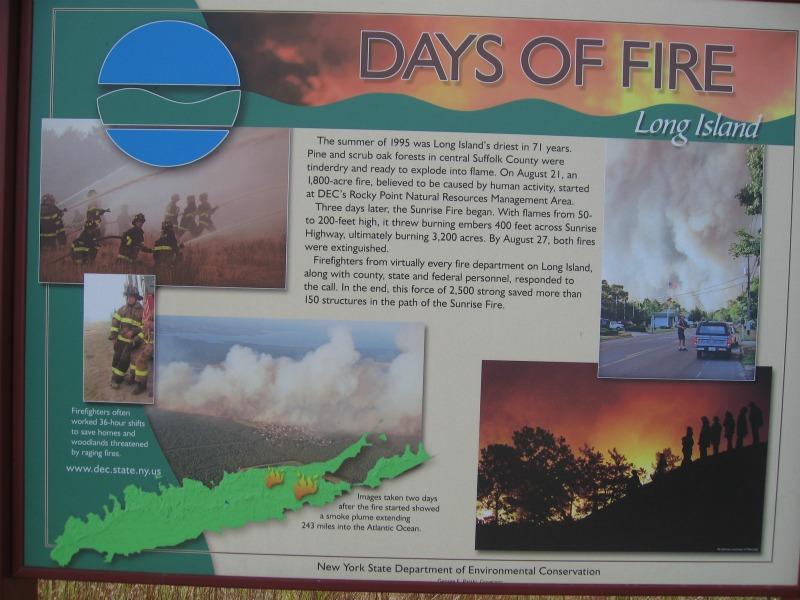 This figure helps visualize the structure and "look" or "feel" of a typical Dwarf Pine Plains. Each bar represents the amount of "coverage" for all the species growing at that height. Because layers overlap (shrubs may grow under trees, for example), the shaded regions can add up to more than 100%.

Information for this guide was last updated on: May 21, 2020