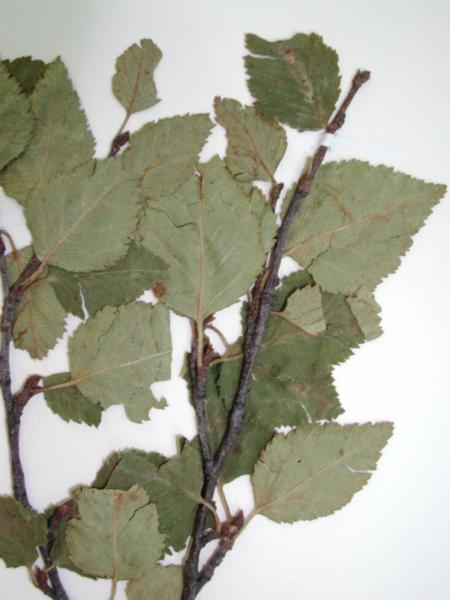 State Conservation Status Rank
S1
Critically Imperiled in New York - Especially vulnerable to disappearing from New York due to extreme rarity or other factors; typically 5 or fewer populations or locations in New York, very few individuals, very restricted range, very few remaining acres (or miles of stream), and/or very steep declines.
Global Conservation Status Rank
G4G5Q
Apparently or Demonstrably Secure globally - Uncommon to common in the world, but not rare; usually widespread, but may be rare in some parts of its range; possibly some cause for long-term concern due to declines or other factors. More information is needed to assign either G4 or G5. The Q indicates this species' status as a distinct full species is uncertain.

This species was orginally described as only a variety of the taller, more common paper birch, and the species name "minor", which means smaller, was probably chosen to reflect that this species resembles a smaller version of paper birch.

There are three known extant populations and a fourth population that needs to be verified. A fifth population has not been seen since 1958 but may still be extant. All of these populations are very small (under 50 individuals), are restricted to the alpine regions of the highest summits of the Adirondacks, and occur within about 5 air miles of each other.

There are no clear data indicating how the populations are doing in the short-term.

One population has not been seen since 1958 although it has been looked for. Therefore, further survey work is needed to determine if this population is still extant. The other three confirmed populations each have under 50 individuals. Overall, long-term trends are unclear but may indicate a decline.

Trampling by hiker traffic is a potential threat at one and perhaps at more of the populations.

Precise counts and locations of all individuals should be noted during inventory work so that population trends can be better assessed. One population that has not been seen since 1958 needs more survey work in order to determine whether it is still extant. Another probable population needs to have the identification of Betula minor confirmed.

In New York, this species grows exclusively on or near the highest summits in the Adirondacks. It occurs in open alpine meadows and in sub-alpine krummholz often among rock outcrops (New York Natural Heritage Program 2007). Rocky slopes, barrens, and subalpine summits (Furlow 1997). In New York: found only on rocky alpine summits; elsewhere on rocky barrens and slopes (Furlow and Mitchell 1990).

In New York, Betula minor is only known from up to five of the highest peaks in the high peaks region of the Adirondacks. All of the populations are relatively close together, being within about five air miles of each other.

In New York, Dwarf white birch is a depressed, small tree or shrub with 1 to several trunks that grows up to 6 or occasionally 10 feet. The twigs are often dotted with large resinous glands. The leaves are about .5 to 1.5 inches long and have coarse and irregular double teeth along the edges. They are yellowish on the undersides. The flowers are small and inconspicuous but grow in dense clusters known as catkins. Separate catkins are composed entirely of female or male flowers.

Betula minor is an upright to somewhat depressed shrub or small tree which grows up to 2(-3) meters tall and has close, not readily exfoliating bark. It has a variable amount of large warty glands on the twigs. The leaves are doubly serrate, acuminate to acute to occasionally rounded at the summit, rounded or cuneate at the base, glabrous or sparsely pubescent and somewhat glandular abaxially with the veins and axils more densely pubescent, and (1.5-)2.0-3.7(-4.5) cm long. The lateral lobes of the bracts of the female catkins have upturned lobes. Fruits are 1.8-3.0 mm long and 2.5-4.5 mm broad and have wings which are 0.8-1.8 mm wide (Furlow and Mitchell 1990, Furlow 1997).

This species can be identified vegetatively but mature fruits are helpful and collections or photos should include these.

Betula glandulosa grows in the same alpine habitats as B. minor. It has doubly serrate leaves with mostly an acuminate to acute apex, while B. minor has singly toothed leaves with a rounded apex.

This species can be surveyed for once the leaves are mature in June, although since it is helpful to have fruits the best time to survey for this species is from August through September.

The time of year you would expect to find Dwarf White Birch vegetative, flowering, and fruiting in New York. 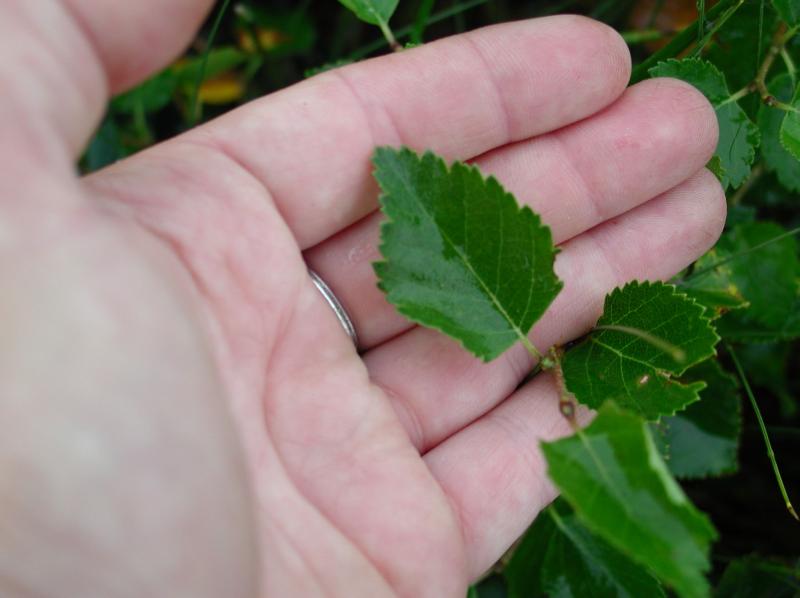 E. Lepage (1976 in Furlow 1997) interprets the type of B. minor to be a hybrid between B. papyrifera and the name he uses for the dwarf species, B. saxophila. Furlow (1997) sees the characters of the type of B. minor falling easily within the variation of B. saxophila and therefore retains the name B. minor for the dwarf species and relegates B. saxophila to synonymy. Betula borealis Spach sensu Fernald (1970) is a segregate taxon that if recognized occurs only outside of New York. Gleason and Cronquist (1991) treat this taxon as a hybrid. Furlow (1997) believes the two taxa (B. borealis sensu Fernald and B. minor (Tuckerman) Fern. actually consist of one, somewhat variable, taxon which should be recognized as B. minor. Betula minor was originally described as a variety of Betula papyrifera Marsh. (as B. papyracea Ait.) from the White Mountains of New Hampshire (Furlow and Mitchell 1990). Betula minor has been lumped under the similar B. pubescens by Löve and Löve (1966 in Furlow 1997). Some authors (Hultén 1968 in Furlow 1997, Lepage 1976 in Furlow 1997, Furlow and Mitchell 1990) believe that at least the Adirondack populations which often occur near B. cordifolia and B. glandulosa may have originated by hybridization, perhaps followed by polyploidy, between these two taxa. Gleason and Cronquist (1991) consider B. minor a hybrid of B. glandulosa and "a dwarf alpine form of B. papyrifera" and do not key out this taxon. More work needs to be done to clear up the issues mentioned above (Furlow 1997).