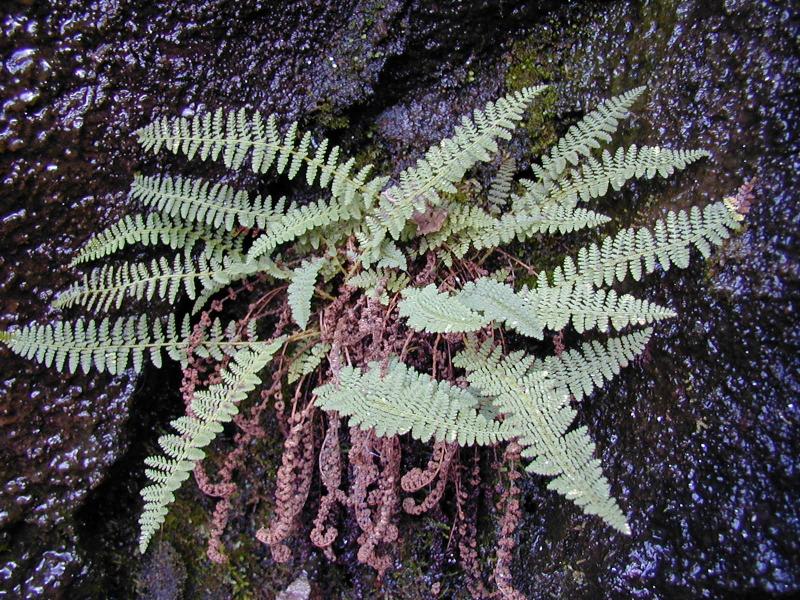 This is the smallest of our North American wood ferns. The fragrance, which some people liken to primrose, comes from the tiny glandular hairs on the fronds. The New York plants are at the southeastern limit of the species range.

There are 10 known populations and at least ten historical populations. These historical locations are in the Adirondacks in areas that have likely remained unchanged since the plants were last reported. Surveys focused on these areas will likely lead to the rediscovery of these populations. Few threats are known for this plant, mainly because it is found in relatively difficult to access areas.

Some of these sites have been visited/known for many years. The trend seems stable for most populations.

There are 10 historical sites but many of them have not been checked so an accurate picture of the long-term trend has not been possible. The sites are isolated so there probably has not been a great deal of change.

The sites are isolated so there is very little human threat. The plants are at the southern extreme of the range so they may be threatened in the future by global warming. The Catskill populations are located on north-facing cliff faces near waterfalls. If ice climbing becomes more popular, we could see an impact on these populations.

There are no research needs at this time except to follow-up on some of the historical populations. Surveys should be conducted at Avalanche Pass, Cascade Lakes, Indian Lake, Joy Mountain, Mount Immortelle, Panther Mountain, and Wilmington Notch.

A fern limited to a few populations in the High Peaks of the Adirondacks and cliffs of the Catskills.

This is a very attractive fern that grows from the sides of wet cliffs. The graceful, drooping, evergreen leaves arise from a few to many dead brown leaves at the base. They grow up to 30 cm long and 6 cm broad and narrow to the base and the tip. There are 15-40 pairs of leaflets that are twice-divided and covered with glands. The leaf stalk is covered with shining brown to reddish scales. The spore packets are arranged in circles on the bottom of the leaves and are covered with a kidney shaped flap of tissue (indusium). Sometimes they become so numerous the bottom of the leaves appear chocolate-colored.

A fern with a stout rhizome covered with numerous persistent shriveled and curled old fronds. The stipe is 1-15 cm long, glandular, and chaffy at base with lustrous brown or reddish often glandular-puberulent scales 3-15 mm long. The leaves are evergreen, 7-30 cm long, up to 6 cm broad, glandular and aromatic, lanceolate to broadly linear, tapering from middle to base and apex, and with 15-25 (40) pairs of pinnately incised or crenate pinnae 0.2-2 cm long. The indusia are densely crowded and overlapping one another with the very narrow sinus commonly obscured.

Only the fronds are needed to identify this fern, but fresh fronds with sori are best.

A relatively unique fern within the Dryopteris genus. Some may confuse this fern with Woodsia which has an inferior indusium and a blade that does not taper near the base. Also, there are no aromatic glands on Woodsia.

This fern may remain green year-round with spores present during the summer and fall. Surveys are best conducted during the summer since many plants are located near waterfalls, cliff faces, and steep slopes that are ice and snow-covered in the winter.

The time of year you would expect to find Fragrant Cliff Fern vegetative and fruiting in New York.

This fern is not closely related to any of the many other Dryopteris species present in North America.