There are only four known populations that are rather small and two historical popualtions for this wetland sedge that may be confused with Carex squarrosa or Carex typhina. New York appears to be this plant's northeastern range limit. There is the potential that this is overlooked, however Flora of North America states that this is one of "the mostly easily recognized sedge species." There are minor threats that include manipulation to hydrology, changes in water chemistry, invasive species, and direct habitat alterations.

All three extant sites were first observed in the 1990's. No work has been done at them since that time so trends at these sites are unknown and therefore overall short term trends are not known.

There are at least two historical populations which have not been seen in over 20 years. Surveys have not been conducted at these sites. So, it is unknown if these populations are still extant. The three extant sites known from New York were first documented in the 1990's. These sites may have been overlooked in the past although Carex frankii is very conspicuous and easy to identify. There is one population that appeared as a short term waif near a fill pile. Overall the long term trends are not clear but may indicate an incline.

There are minor threats that include manipulation to hydrology, changes in water chemistry, invasive species, and direct habitat alterations.

One site has some mitigation recommendations that need to be followed up on.

Surveys are needed to historical sites to determine if these sites still have extant populations of C. frankii.

Carex frankii occurs in a few scattered sites in central and southeastern New York. It is at the extreme north eastern edge of its range in New York.

Carex frankii occurs from New York west to Ontario, Michigan, and Nebraska south to Georgia and Oklahoma (Ford and Reznicek 2002).

Carex frankii is a tufted perennial grass-like plant. It has strap like leaves that are 2.5-11.5 mm wide. Arising from the center of the leaves at the base of the plants are stems that are 18-80 cm tall. Leaves and elongated flower/fruit clusters come off of these main stems. The flower/fruit clusters are 12-50 mm tall and erect. Fruits are densely packet on these clusters and are 3.5-6 mm long (Ford and Reznicek 2002).

Carex frankii is a cespitose perennial with leaves 2.5-11.5 mm wide. Bracts that subtend the spikes have blades much longer than the inflorescences. Culms have 3-7(-9) lateral erect spikes which are mostly pistillate with a few staminate flowers at the base and rarely at the apex. Terminal spikes are staminate or sometimes gynecandrous, pistillate, or abortive. Pistillate scales have long scabrous awns that exceed the perigynia bodies. Perigynia are 3.5-6 mm long and horizontal (Ford and Reznicek 2002).

It is easiest to identify this species when it is in immature to mature fruit.

Carex squarrosa and Carex typhina are two species also in section Squarrosae that are somewhat similar. Both have pistillate scales that are awnless or have a short awn and are shorter than the body of the perigynia. They also have gynaecandrous terminal spikes. In addition, Carex squarrosa has only 1-2 (-3) spikes per culm (Ford and Reznicek 2002).

The plants start to fruit in mid-July and are in fruit through the end of September or sometimes even later. Toward the end of this season the fruits start to shed Therefore surveys are most successful from mid-July until mid-September.

The time of year you would expect to find Frank's Sedge fruiting in New York. 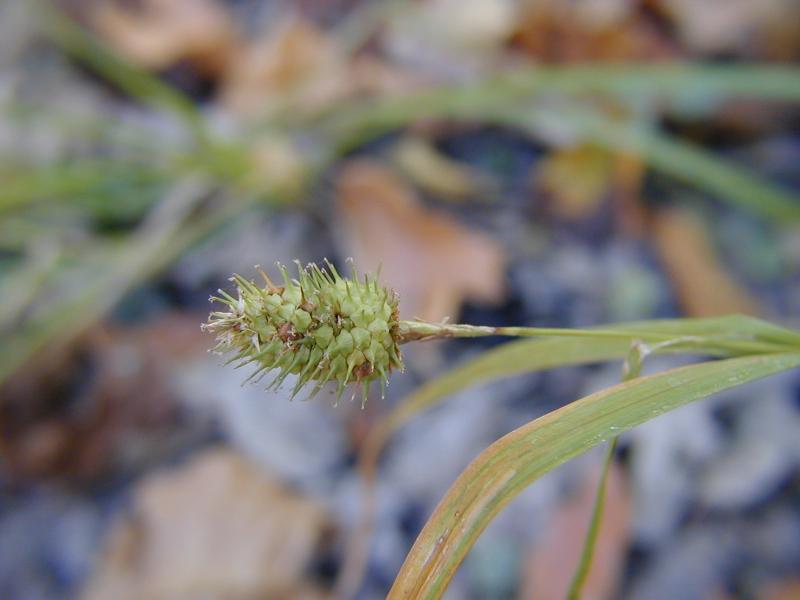