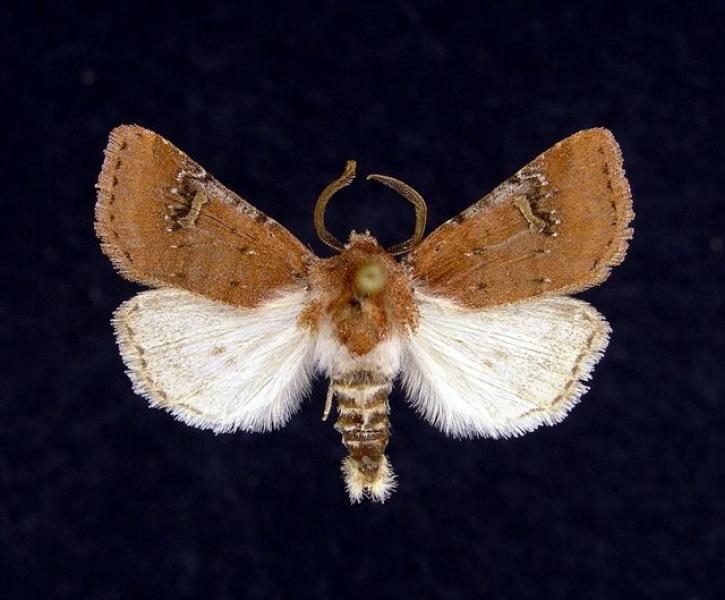 Many darts overwinter as larvae (caterpillars). The larvae continue to feed and grow throughout the winter at temperatures of approximately 5 degrees Celsius and above (Wagner et al. 2008).

Within New York State, the fringed dart is known to occur only on Long Island. Its specific habitat is poorly known. However, coastal pine barrens habitats on Long Island have been trapped extensively, yielding only five populations in these and other habitats. It seems to be uncommon to rare in the northern part of its range, including New York State (Covell 1984).

The short-term trend for the fringed dart in New York State seems to be stable. At one documented population, the numbers of adults that were captured during surveys in 1995 (17) and 2000 (16) were stable, indicating that the population is viable and reproducing. Most of the five documented populations are on protected lands.

The long-term trend for the fringed dart in New York State seems to be declining (New York State Department of Environmental Conservation 2005). The species inhabits sandy areas, which have been prone to development on Long Island.

Elimination and fragmentation of habitat by commercial and residential development are threats to the fringed dart. In addition, fire suppression and allowing natural succession may eliminate suitable habitat, yet improperly planned fires could wipe out populations.

Maintaining suitable habitat is the main management need. Although the fringed dart occupies a variety of habitats in addition to pine barrens, several of the natural communities that it occupies in New York State require periodic fire or mechanical management to maintain the natural community. A recent study that was conducted to investigate the effect of prescribed burns on moths in scrub-oak barrens on Long Island found that the abundance of species that feed on forbs, such as the fringed dart, did not increase after burns. This was attributed to the fact that fires in the studied habitat removed the biomass of the shrub layer but did not open up new areas, which would have led to increased forb abundance (McGuinness 2009). In 2005, a fringed dart was captured in an area of a pine barrens habitat that had burned during a wildfire in 1995 (McGuinness 2006). During prescribed burns, some areas should be left unburned to provide refugia for the fringed dart and allow for its later recolonization of burned areas. In addition, it would be beneficial to restrict ATV use and minimize lighting in order to maintain dark sky conditions in occupied areas.

The fringed dart is known to occur on Long Island.

The fringed dart occurs from New Hampshire to Florida, west to Indiana and Texas (Covell 1984).

The fringed dart has two color phases. Its forewings can be light gray or red. Wings of both colors have similar markings. The antemedial (AM) and postmedial (PM) lines are composed of black and white dots. The reniform spot is yellowish, with blackish edges, and is surrounded by dark gray scaling. The terminal line consists of black spots. Black patches are along the anterior margin, at the top of the AM and PM lines. The hind wings are dirty white, with grayish-brown shading and a faint median line consisting of dark dots. The wingspan is 25-32 mm (Covell 1984). Caterpillars of darts are robust and smooth. Within any given dart species, caterpillars tend to exhibit variable colors and patterns (Wagner et al. 2008).

The life history of the fringed dart is poorly known. The species has one brood each year (Covell 1984). Larvae (caterpillars) tunnel underground during the day. Larvae overwinter. Pupation occurs in a chamber underground (Wagner et al. 2008).

The larval foodplants are unknown, but larvae probably feed on a variety of forbs and low plants such as grasses and herbs (Covell 1984; Wagner et al. 2008; NatureServe 2010).

The best time to see the fringed dart is during its flight season. In New York State, it has been captured flying from late September until early October.

The time of year you would expect to find Fringed Dart present and reproducing in New York.