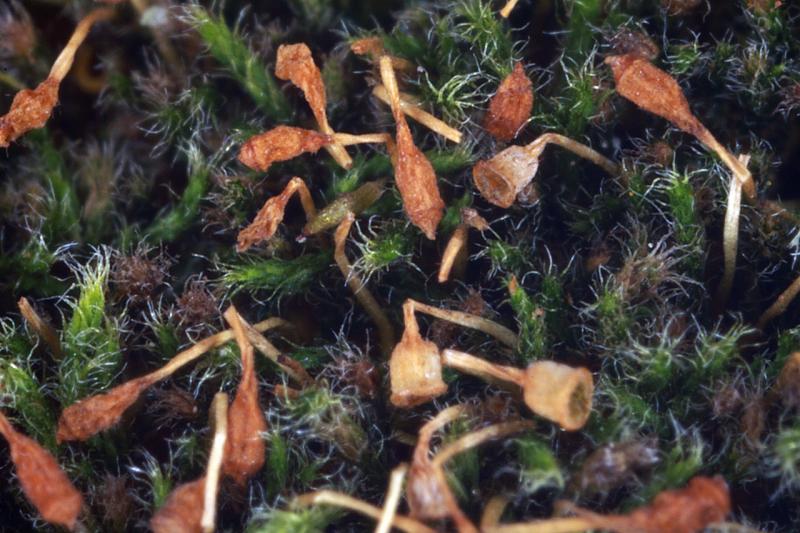 The rank was designated based on Cleavitt's (2006) report. Two specimens were verified. The last collection was made in 2005.

The short term trend of this moss appears positive. There are two verified extant occurrences and it was newly documented to the flora in 2005. Population counts were not available from these surveys.

The long term trend of this moss appears positive. There are two verified extant occurrences and it was newly documented to the flora in 2005.

Over collection and human disturbance to plants growing on accessible cliff faces could be threats.

Monitor the impact of visitation and human disturbance to populations on accessible cliff faces.

No research needs have been identified.

In New York, this moss has been collected from a calcareous cliff along a gorge trail and from the base of a gneiss cliff containing amphibolite bands (New York Natural Heritage 2015). Bark of trees, rock (FNA 2014).

This moss has been documented at two disjunct loications in New York in Tompkins and Washington counties. It is new to the documented flora as of 2005 and is speculated to be the result of a somewhat recent move northward into New York state.

Fringed Fabronia has been collected from the tropical Americas from Mexico, and West Indies to Central and South America. It has also been found in Europe, Japan, Australia and the Pacific Islands of Hawaii and New Zealand. In the continental United States it has been collected from Oregon south to California, Arizona, New Mexico and Texas, east through the central states stretching north and east to South Dakota, Minnesota, Wisconsin, Michigan, Ohio, Pennsylvania, New York and New Jersey, and south to Arkansas, Missouri, Louisiana and Georgia.

Fabronia ciliaris is a very small moss that grows in loose or dense, silky, green or yellow-green mats. Its leaves are 0.3 to 0.8 mm long and egg-shaped-lanceolate, typically crowded, erect or appressed when dry and erect-spreading to spreading when moist. The leaves gradually narrow to a long, yellowish or hyaline awn, rather coarsely and irregularly serrate. The leaf midrib is very thin (often indistinct), terminating at or somewhat above to middle portion of the leaf. The upper leaf (lamial) cells short-rhomboidal, 2.5 to 5 times as long (20-45 µm)
as wide (8 to 10 µm). The basal leaf cells are quadrate in several marginal rows. Plants are bisexual with female and male parts in separate areas (autoicous). Perichaetial leaves are serrulate, and capsule stalks (setae) 2 to 4mm long more or less curved or occassionally erect. Capsules are pale-brown, 0.5 to 1.0 mm long, broadly subcylindric to ovate with the narrower end at the base (obovoid). The capsules bear brown or red-brown peristome teeth more or less fused in 8 pairs. The spores are 10 to 15 µm in diameter, with finely papillose to nearly smooth surfaces.

For positive identification a small portion of the sporophyte plant including the entire stem, stem leaves, and intact capsule is ideal.

Playdictya, Homomallium and Leucodon mosses are the most similar species that occur in New York. Fabronia ciliaris' coarsely dentate leaves, single ring of teeth (peristome) in its capsule mouth, and the wavy cells walls of its anthers distinguish it from Playdictya and Homomallium. The Playdictya and Homomallium mosses have leaves that are entire or nearly so, double peristomes, and straight cell walls on their anthers. Leucodon mosses can be distinguished by their relatively robust, coarse plants that typically bear folded stem leaves, the long sheathing leaves surrounding the female inflorescence (archegonia) and then sporophyte, and capsules that are held within or just barely above the leaves (immersed or short-exerted). In contrast to Leucodon spp., Fabronia cilaris is a small or minute plant that grows on the bark of trees, has flat stem leaves, with the leaves surrounding its female inflorscence not notably elongate or sheathing, and capsules that are held well above its leaves.

The vegetative form (gametophyte) of Fabronia ciliaris can be seen throughout the year. The reproductive form (sporophyte) bears capsules that mature in summer.

The time of year you would expect to find Fringed Fabronia vegetative and fruiting in New York.