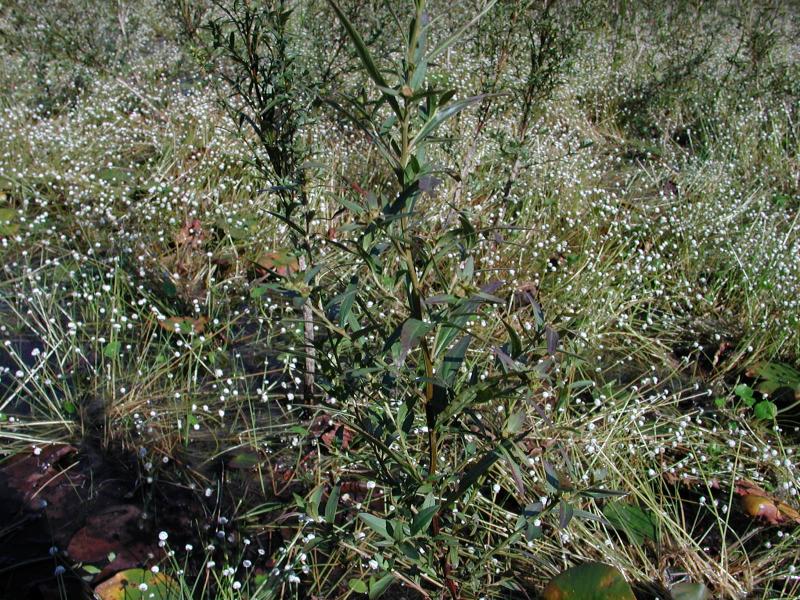 Although this species grows almost exclusively near the coast there are a few populations known from close to 600 miles inland (Peng 1989). The specific epithet sphaerocarpa means spherical fruited (Fernald 1970) and indicates the shape of the fruits of this species.

There are 17 known extant populations but many of these sites are very close together. There are also about 8 populations which have not been seen in over 70 years and are considered historical. This species is near the northern edge of its range in southeastern New York and the habitat that this species prefers in New York is limited.

There are around 8 populations which have not been seen in over 70 years. Many of these populations occur within the greater New York City metropolitan area and may have become extirpated as a result of urbanization. It is possible that some of these populations are still extant but even if they are, it is likely they occur in degraded habitat. Although long term trends are not decisive they appear to indicate that this species has declined within the past 150 or so years.

Populations of this species and their associated habitats should be protected from disturbances by off road vehicles and development.

In New York, this species primarily occurs just in or on the edges of shallow coastal plain ponds set in pine barrens. These ponds vary greatly in water levels from year to year. Plants occur emergent from just within the ponds or on the exposed pond shores. They also occur in herbaceous openings in shrub swamps and along channels or outlets/inlets of wetlands in pine barrens. One population from the lower Hudson Valley occurs on floating vegetation mats and in shallow water along the shore of a pond (New York Natural Heritage Program 2007). Swamps and wet soil (Gleason and Cronquist 1991). Plants of Ludwigia sphaerocarpa grow in drainage ditches, on stream or pond shores, and in river marshes, swales, swamp forests, edges of limestone sinks, peaty bogs in pastures, and interdunal marshes (Peng 1989). Sandy and peaty pond-margins and swamps (Fernald 1970).

This species occurs predominately in the eastern half of Suffolk County, Long Island. There are also a few other scattered populations currently or historically known from western Long Island to Staten Island north to the lower Hudson Valley in Ulster County (New York Natural Heritage Program 2007). There is also a specimen reported in Peng (1989) from Yates county in western New York. This is a Sartwell specimen deposited at US. Sartwell that came from Yates County and many of his specimens, although labeled Yates County, are from other localities (New York Natural Heritage Program 2007). There are a few disjunct populations south of Lake Michigan (Peng 1989) and it is possible that this species also occurs disjunct in western New York (at least historically). Since Yates County is a very unlikely location for this species and because Sartwell notoriously labeled his specimens with his place of residence it is likely the Yates County specimen came from a different locality.

This species occurs in or near the Atlantic and Gulf coastal plains from eastern Massachusetts south to Florida and west to eastern Texas. It is also disjunct in southcentral Tennessee, southwestern Indiana, and along Lake Michigan in northeastern Illinois and northwestern Indiana (Peng 1989). The reported disjunct occurrence in western New York (Peng 1989) is believed to be based on a specimen from another locale (New York Natural Heritage Program 2007).

Globe-fruited Ludwigia is a perennial herbaceous plant that is usually between 60 and 110 cm. tall. The lower part of the stem below the leaves is light gray and spongy/corky. It has narrow alternate leaves along the stems with flowers in the axils of the upper leaves. The flowers lack true petals but the four sepals are yellow within and showy. Therefore, they can be mistaken for true petals. The flowers mature into roundish fruits (Peng 1989).

This species can readily be identified when it is in flower or fruit.

Ludwigia polycarpa is not known from New York but occurs in adjacent states and is perhaps the most similar. It shares being in section Microcarpium with L. sphaerocarpa. Ludwigia polycarpa has fruits longer than wide, sepals green adaxially, the apex elongate acuminate and reflexed, and bracteoles are 3.5-6.5(-8) mm long vs. fruits that are about as long as wide, sepals are yellow adaxially, the apex acuminate and ascending, and bracteoles are 0.5-1.5 mm long for L. sphaerocarpa (Peng 1989).

In New York, this species starts to flower in mid-July or occasionally earlier. Immature fruits begin to appear in late July and last until mid-September or a little bit later. It is easiest to spot and identify this species when it is in flower or fruit and therefore, the best time to survey for this species is between mid-July and mid-September.

The time of year you would expect to find Globe-fruited Seed-Box flowering and fruiting in New York. 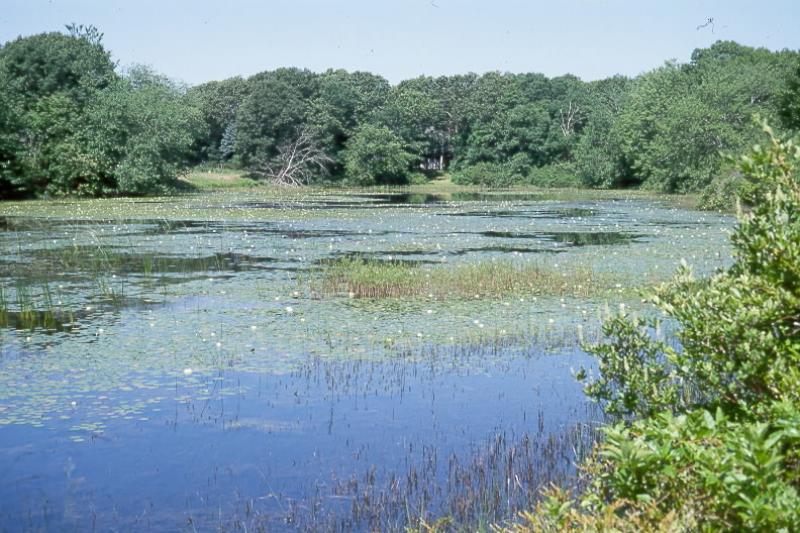 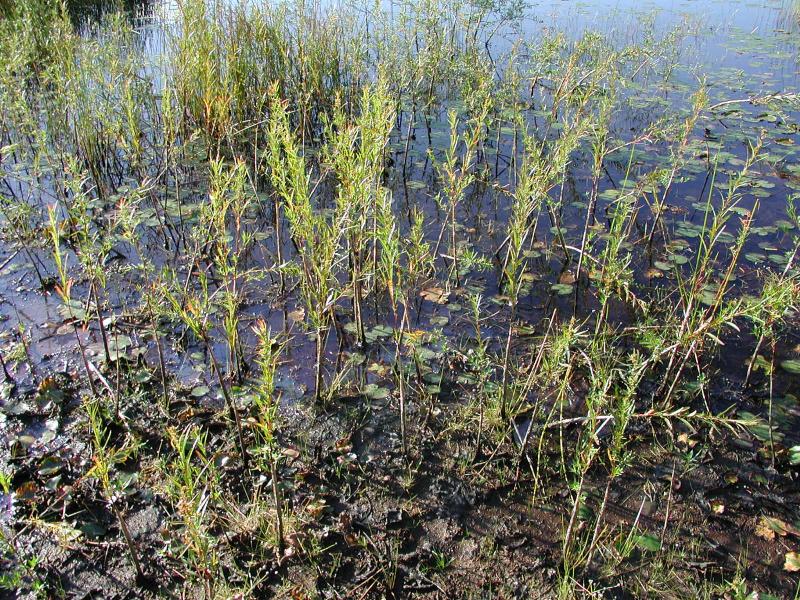 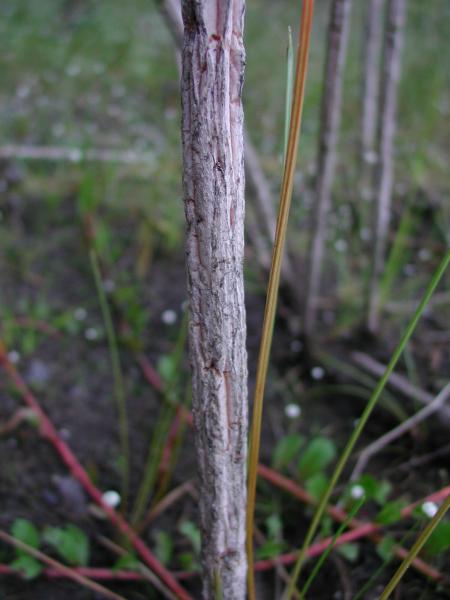 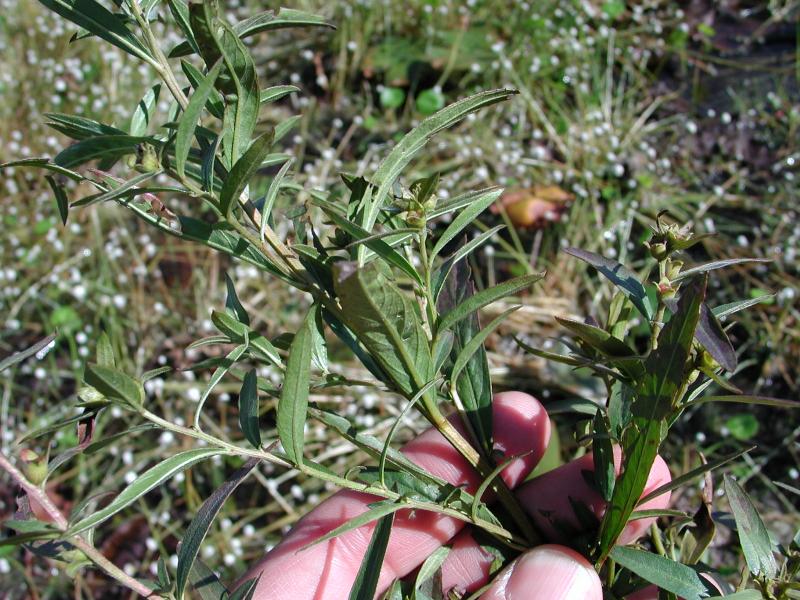 Four varieties of Ludwigia sphaerocarpa were described by Fernald (1935, 1970) with var. sphaerocarpa (as var. typica) and var. macrocarpa occurring in New York. Peng (1989) lumped these four varieties together showing that the characters used to separate them did not correlate. Recent authors (Gleason and Cronquist 1991, Kartesz 1994, Weakley 2007) follow Peng's circumscription and recognize only one highly variable taxon. Ludwigia sphaerocarpa occurs and hybridizes with L. glandulosa, L. linearis, L. pilosa,and L. polycarpa. None of these species or hybrids with them are known from New York (Peng 1989). This species is believed to be of hybrid origin with one or both of its parents extinct (Peng 1988, 1989).