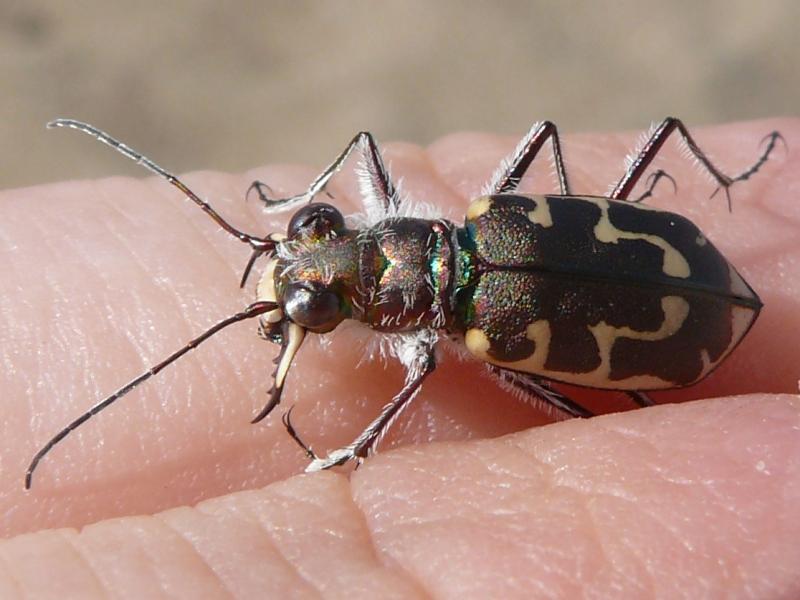 The hairy-necked tiger beetle has declined in many parts of its range, mainly due to habitat alteration and recreational pressure on its sandy habitats.

This species has a limited state distribution, narrow habitat requirements, and is declining in much of its range, including New York, due to beach front development and overuse of beaches. The rank was calculated using NatureServe's Element Rank Calculator, version 2.0.

No information on short-term trends is available.

Approximately 7 of 40 historical occurrences on Long Island appear still to be occupied, with most having been surveyed recently. No historical information is available for New York's Great Lakes populations.

The overall threat impact is considered Very High. Beach front development and overuse of beaches are major threats. In particular, vehicle traffic that crushes larval burrows is a chief cause of decline.

The most critical management need for the hairy-necked tiger beetle is the control and/or elimination of vehicle and other recreational traffic on occupied beaches, which can crush larval burrows. Beach grooming and stablization measures also adversely affect larval and adult beetles.

A primary research need is further description of the morphology, habitat use, and distribution of C. h. hirticollis and C. h. rugifrons, which apparently overlap at several locations in New York (Schlesinger and Novak 2011). Research is needed on the reasons C. hiritcollis is able to persist on some beaches where C. dorsalis dorsalis is not. Research is also needed on microhabitat separation (niche partitioning) among C. hirticollis, C. repanda, and C. tranquebarica.

This beetle occurs on sandy beaches associated with large lakes (Ontario and Champlain) and the ocean. Beaches can be narrow or wide, with varying amounts of dune vegetation, but usually with some associated dunes intact.

This species is primarily recorded from Long Island with some recent records from the shores of Lake Champlain and Lake Ontario. It is primarily a beach species.

Like other tiger beetles in the northeast, the hairy-necked tiger beetle is a small insect approximately 0.5 inches (12-14 mm) in length with long sickle-shaped mouthparts, long thin antennae with 11 segments, a long body form with head and eyes wider than the middle portion (thorax) of the body, long thin legs for running, and a pattern of white markings (maculations) on wing covers (elytra) located on top of the main portion of the body (abdomen). The elytra of the hairy-necked tiger beetle are brown or bronze; the anterior maculations are G- and reverse-G-shaped. As with other tiger beetles, the larvae live in burrows in the ground and are white and grublike in appearance. (Pearson et al. 2006, Leonard and Bell 1999)

The hairy-necked tiger beetle, true to its name, has a hairier "neck" (thorax) than other tiger beetles in similar habitats; however, this character can be challenging without other species in hand for comparison. The G shape at the front of the elytra, as opposed to a C shape in C. repanda, is the best character for distinguishing this beetle.

All tiger beetles are best identified as adults. Far fewer good diagnostic characters are available for identifying larvae, many species lack formal or complete larval descriptions, and there is no comprehensive key for those larvae that have been described (Pearson et al. 2006).

Most adult tiger beetles are diurnal animals, spending the warmer parts of the day running along the surface of the ground hunting, eating, and mating. They pursue prey by running in short, fast spurts interspersed with brief stops. Tiger beetles are most active on warm, sunny days and will retreat to burrows or hiding places at sunset or when skies become overcast.

Tiger beetles are predatory on other insects. Little is known about specific diet items of the hairy-necked tiger beetle.

The time of year you would expect to find Hairy-necked Tiger Beetle active and larvae present and active in New York. 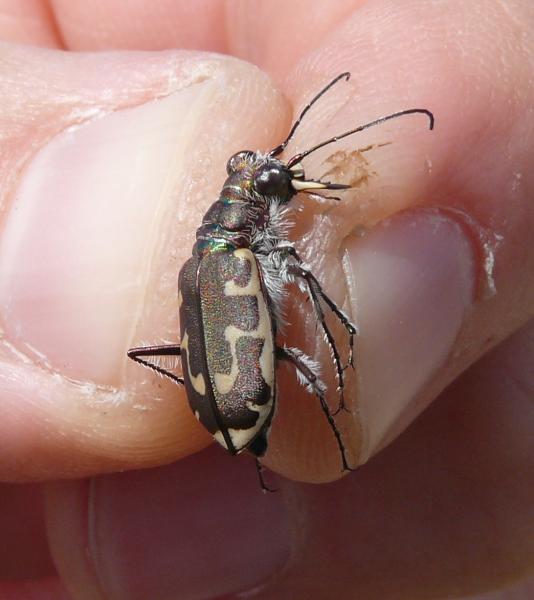 This guide was authored by: Matthew D. Schlesinger

Information for this guide was last updated on: June 29, 2012