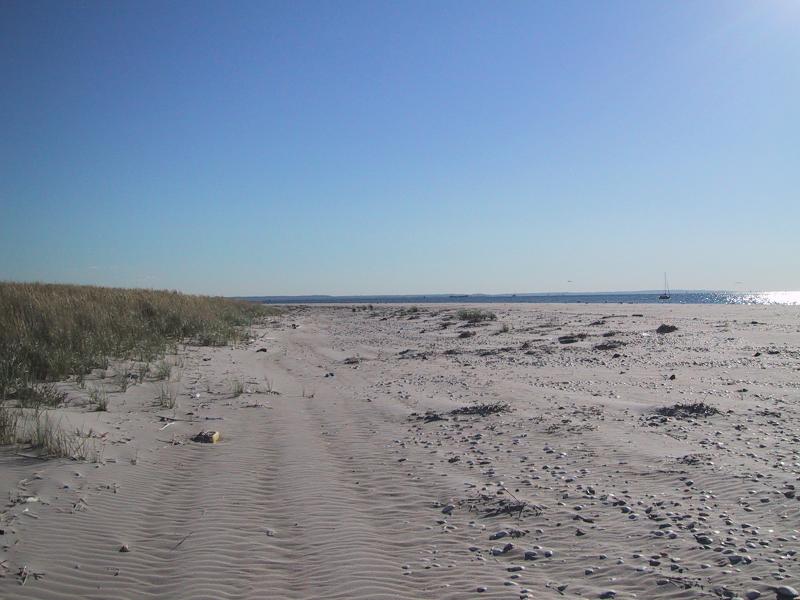 There are an estimated 1000 miles of maritime beach on Long Island covering about 10,000 to 16,000 acres; there may be more than 30 to 50 extant occurrences statewide. The several documented occurrences of this community have good viability and are protected on public or private conservation land. The community is restricted to the ocean shoreline of the Coastal Lowlands ecozone in Suffolk, Richmond, Queens, Kings, and Nassau Counties. Although the number of maritime beaches may have increased slightly when formerly long, continuous examples were fragmented by development, the overall trend for the community is declining as a result of coastal development and recreational overuse. Sea level rise may result in permanent flooding of some occurrences, especially in areas where barriers prevent the migration of beaches inland.

The number and acreage of maritime beaches have likely declined in recent decades, because beach development occurs above mean high tide in the maritime beach and dune areas. However, beach viability/ecological integrity is suspected to be slowly declining, primarily due to anthropogenic alterations (both physical and hydrological) to beach/dune/swale dynamics and coastal development (e.g., fragmentation, shoreline hardening, road construction, and community destruction).

Although the number of maritime beaches in New York may have increased substantially from historical numbers when formerly long, continuous examples were fragmented by development into numerous large and small stretches of beach, their aerial extent and viability are suspected to have declined substantially over the long-term. These declines are likely correlated with coastal development and associated changes in connectivity, hydrology, water quality, and natural processes.

Threats to maritime beaches in New York include driving on the beach (ATVs and four-wheel drive vehicles), fragmentation by development, barriers to connectivity between the open ocean and the beach/dune system, trampling, increased horseback riding, trash, and invasion by exotic species, including winged pigweed (Cycloloma atriplicifolium) and Oriental bittersweet (Celastrus orbiculata). Processes that create and maintain maritime beaches have been disrupted by hydrologic alterations to tidal dynamics, fragmentation, shoreline hardening, altered sediment budgets, and management practices like beach replenishment. Sea level rise may result in permanent flooding of some occurrences, especially in areas where barriers prevent the migration of beaches inland.

Maintain dynamic beach and dune processes, prevent recreational overuse (driving on the beach is particularly destructive) and encourage the public to carry away all of their trash. Monitor rare plant and animal populations, including seabeach amaranth (Amaranthus pumilus) and beach-dune tiger beetle (Cicindela hirticollis), and the nesting use of beaches by species such as the horseshoe crab and the piping plover. Take measures (e.g., install fencing and predator exclosures) to prevent disturbance to critical areas. Ensure connectivity between maritime dunes, maritime beaches, salt marshes, and the open ocean to allow seed dispersal and to enable species to freely move between habitats during nesting season. Remove shoreline armoring to increase overland sediment input; improve water quality by reducing or eliminating sewer and stormwater discharge and pesticide application; restore tidal regime by removing culverts, dikes, and impoundments, plugging ditches, and replacing static flow restriction devices with those that are calibrated for local tidal hydrology.

This community is restricted to the ocean shoreline of the Coastal Lowlands ecozone in Suffolk, Richmond, Queens, Kings, and Nassau Counties.

This community ranges along the Atlantic Coast from southern Maine to North Carolina (NatureServe 2009).

A community with extremely sparse vegetation that occurs on unstable sand, gravel, or cobble ocean shores above mean high tide, where the shore is modified by storm waves and wind erosion. The upper margin of a maritime beach often grades into the base of a primary maritime dune, or other maritime community, such as maritime shrubland or one of the maritime forests.

Known examples of this community have been found at elevations between -1 feet and 32 feet.

Maritime beaches are scenic year-round! Enjoy a visit in the middle of the summer when the ocean is warm for swimming. 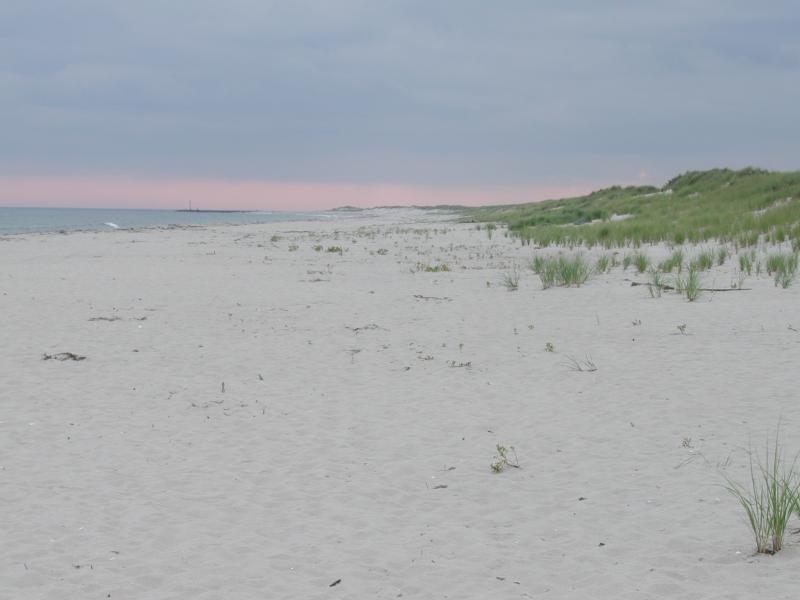 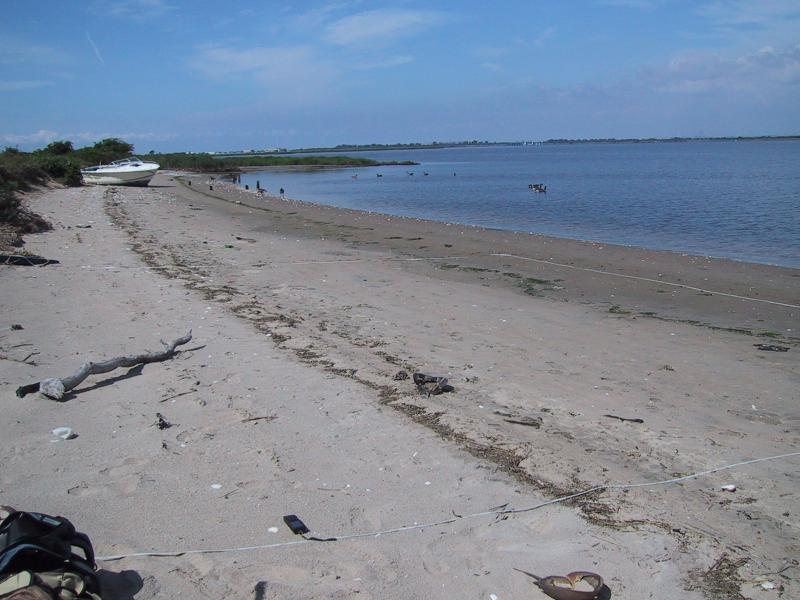 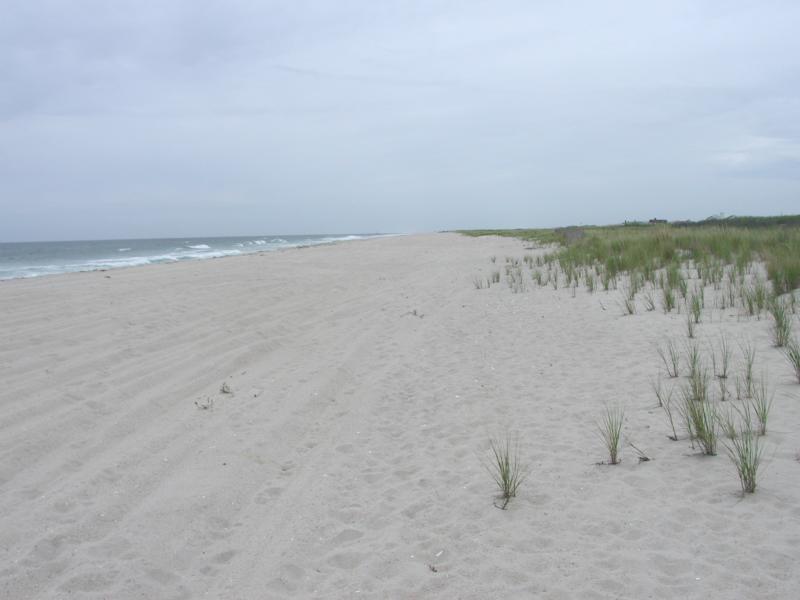 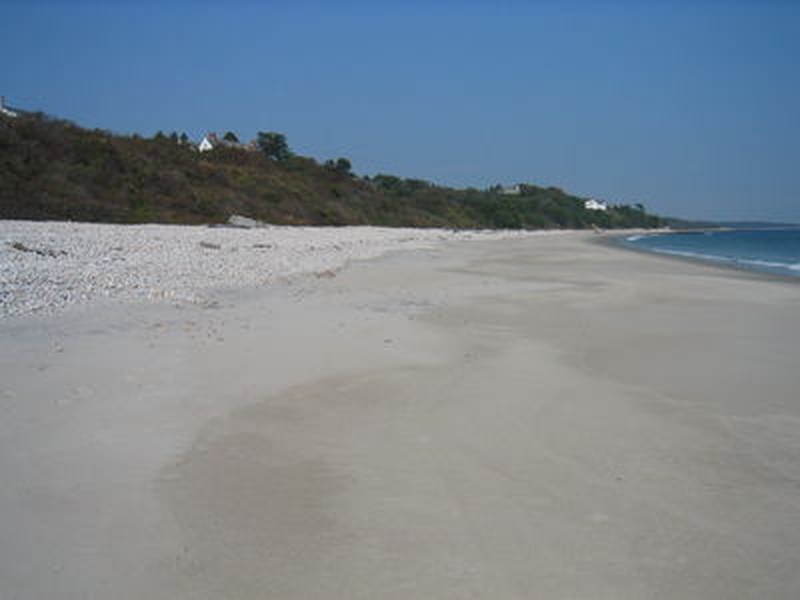 This figure helps visualize the structure and "look" or "feel" of a typical Maritime Beach. Each bar represents the amount of "coverage" for all the species growing at that height. Because layers overlap (shrubs may grow under trees, for example), the shaded regions can add up to more than 100%.

Information for this guide was last updated on: May 15, 2020