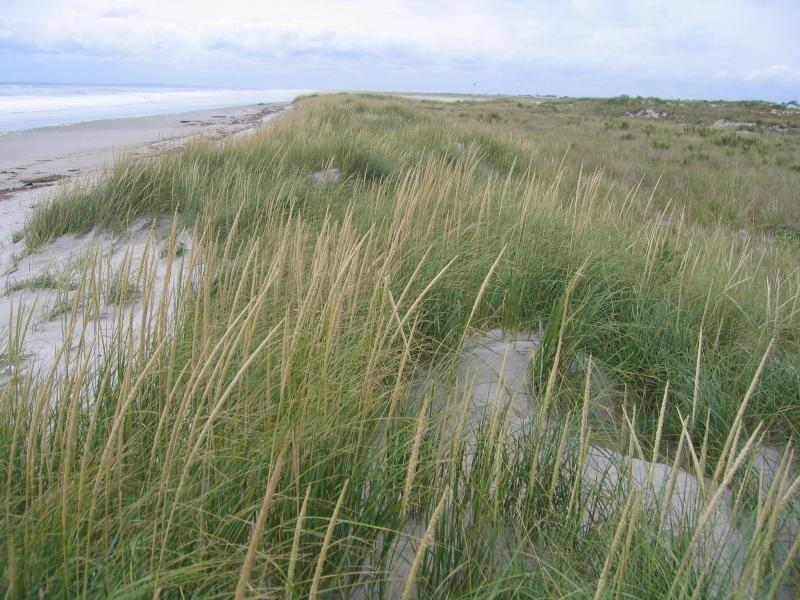 Unlike most terrestrial systems, maritime dune systems move over the landscape and even across property boundaries. Consequently, this migrating dune system is difficult to preserve. However, it needs to be protected and restored. A healthy dune system protects property by reducing the energy of storm waves. It is the best defense against coastal flooding, erosion, and sea-level rise. It provides tremendous economic benefit to the local economy. A healthy coastal sand dune system is also the least costly way to maintain a recreational beach for future generations. (http://www.maine.gov/dep/blwq/topic/dunes/)

There are an estimated 130 miles of maritime dunes on Long Island (about 100 miles on the south shore) covering about 4,700 to 14,000 acres; there may be as many as 30 to 50 extant occurrences statewide. The several documented occurrences have good viability and most are protected on public or private conservation land. This community is restricted to the ocean shoreline of southern and eastern Long Island and includes some high quality examples. The trend for the community is declining due to threats related to alteration of dune/swale dynamics, including management practices that alter natural hydrologic processes (such as breach contingency plans), dune fragmentation, loss of connectivity between the open ocean and the uplands, ORV use, and coastal development.

Although the number of maritime dunes may have increased slightly when formerly long, continuous examples were fragmented by development, the acreage of maritime dunes in New York has probably declined in recent decades as a result of coastal development and recreational overuse. Community viability/ecological integrity is suspected to be slowly declining, primarily due to anthropogenic alterations (both physical and hydrological) to dune and swale dynamics and coastal development (e.g., fragmentation, shoreline hardening, filling, road construction, and community destruction).

Although the number of maritime dunes in New York may have increased substantially from historical numbers when formerly long, continuous examples were fragmented by development into numerous large and small stretches of dunes, their aerial extent and viability are suspected to have declined substantially over the long-term. These declines are likely correlated with coastal development and associated changes in connectivity, hydrology, water quality, and natural processes.

Breach contingency plans for public lands that include dune stabilization and repair, draining overwash water, and other hydrologic alterations threaten processes that create and maintain the community. Additional threats include fragmentation of dunes by development, barriers to connectivity between the open ocean and the dunes, driving on the dunes (off-road and four-wheel drive vehicles), trampling, and invasion by exotic species (Elaeagnus umbellata, Celastrus orbiculata, Pinus thunbergii, Rosa rugosa, Lonicera japonica, Carex kobomugi, and Phragmites australis).

Maintain dynamic beach and dune processes, including allowing dunes to be breached and overwashed by storm events. Minimize breach closure, groundwater pollution, and road fill. Prevent recreational overuse (e.g., driving and trampling) and encourage the public to stay on marked trails. Undertake dune restoration using native species as needed and avoid planting potential invasives, like Rosa rugosa. Prevent the spread of invasive exotic species into the dunes through appropriate direct management and by minimizing potential dispersal corridors, such as beach access trails and roads. Monitor the nesting use of dunes by species such as the diamondback terrapin and take measures (e.g., install predator exclosures) to prevent nest predation by raccoons, skunks, and foxes. Ensure connectivity between maritime dunes, low salt marsh, and the open ocean to allow species to freely move between habitats during nesting season.

Any development effort that disrupts connectivity between the open ocean and the maritime dune system should be avoided (e.g., a road running parallel to the beach between the beach and dunes). This community is best protected as part of a large beach, dune, salt marsh complex. Development should avoid fragmentation of such systems to allow dynamic ecological processes (overwash, erosion, and migration) to continue. Connectivity to brackish and freshwater tidal communities, upland beaches and dunes, and to shallow offshore communities should be maintained. Connectivity between these habitats is important not only for nutrient flow and seed dispersal, but also for animals that move between them seasonally. Similarly, fragmentation of linear dune systems should be avoided. Bisecting trails, roads, and developments allow exotic species to invade, potentially increase 'edge species' (such as raccoons, skunks, and foxes), and disrupt physical dune processes.

An investigation into the taxonomic distinction between the stabilized maritime dune variant, maritime heathland, and maritime grassland is needed, as these communities can be essentially identical in species composition, structure, and function. They need further documentation, analysis, and clarification. More research could focus on site specific habitat suitability and use for nesting by terrapins, seabirds, and other species.

Restricted to the ocean shoreline of southern and eastern Long Island. Discontinuous patches of maritime dunes occur from Rockaway Point east to Jones Beach, where the dunes become larger and less fragmented (e.g., Fire Island Wilderness Area), and the dunes continue east until the shore grades into morainal bluffs at Montauk Point. Smaller examples (<5 miles long each) occur in the Peconic Bay and along the north shore of the North Fork of Long Island.

This community is restricted to mainland coastal, barrier island, and peninsular sand dunes along the northern Atlantic Coast from Maine south to North Carolina (NatureServe 2009).

A community dominated by grasses and low shrubs that occurs on active and stabilized dunes along the Atlantic coast. This community consists of a mosaic of vegetation patches. This mosaic reflects past natural disturbances such as sand deposition, erosion, and dune migration. The composition and structure of the vegetation is variable depending on stability of the dunes, amounts of sand deposition and erosion, and distance from the ocean.

The best time to visit maritime dunes is in the mid- to late summer when dune plants are flowering and the water of the Atlantic ocean has warmed to a comfortable temperature for swimming. 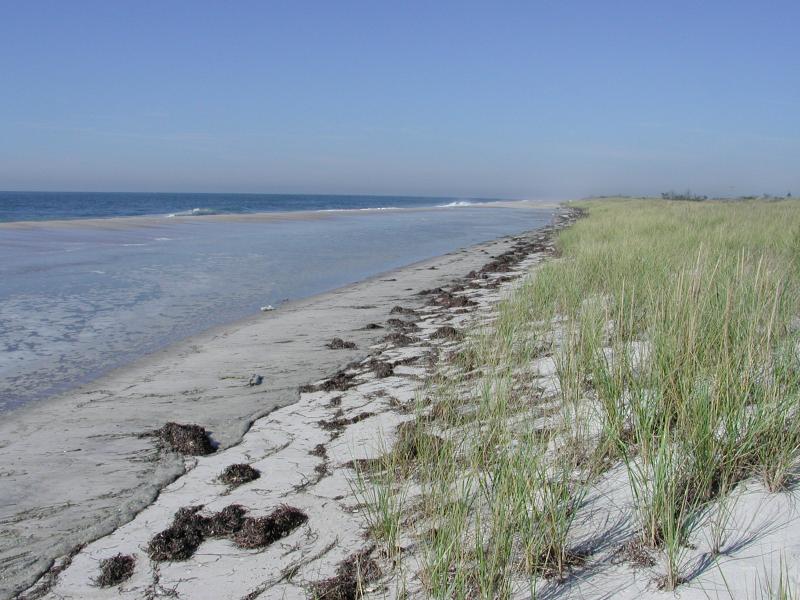 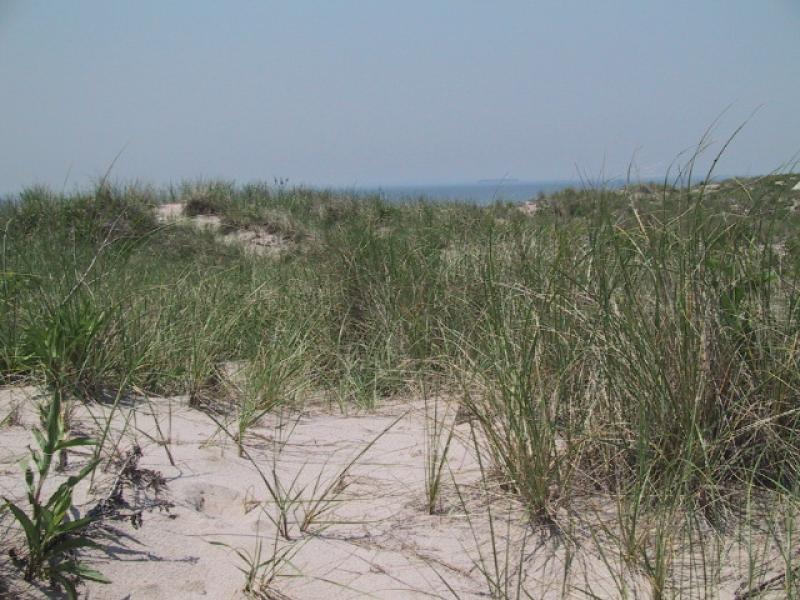 This figure helps visualize the structure and "look" or "feel" of a typical Maritime Dunes. Each bar represents the amount of "coverage" for all the species growing at that height. Because layers overlap (shrubs may grow under trees, for example), the shaded regions can add up to more than 100%.