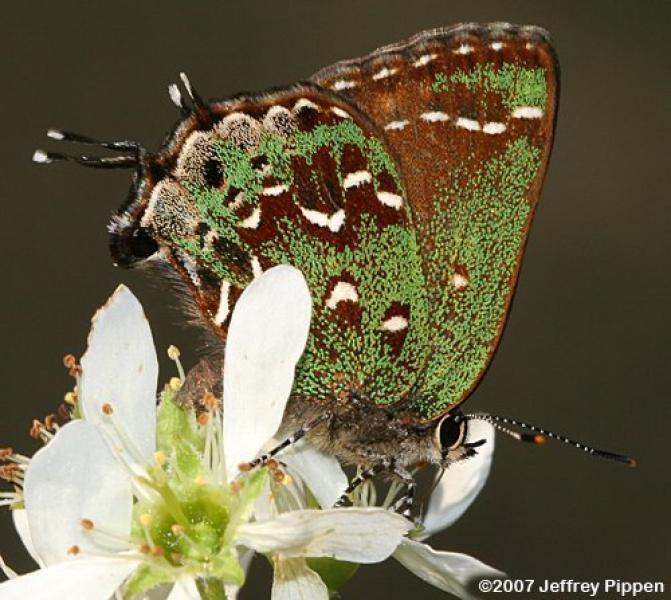 This is the only butterfly species whose caterpillar feeds exclusively on Atlantic White Cedar.

Although this species is one of just a handful of butterflies on the state endangered species list, nothing is known of its current status in New York. However, there is reason to believe that this species is extirpated from the state. All of the few known occurrences on Long Island were first- discovered about 1980, and since then only one of them has been found to harbor butterflies. At this site only 12 butterflies were collected during seven surveys between 1983-1989 and resurveys in the early and mid-1990s failed to turn up any butterflies at any of the formerly occupied sites. Mosquito spray programs on Long Island are known to kill the butterflies outright (Shapiro and Shapiro 1973) and there are myriad threats to the viability of its white cedar swamp habitat not only on Long Island, but rangewide. Only an estimated 5% of the historical Coastal plain white cedar swamps in New York remain. Past spraying for spongy moths (especially DDT in the 1950s) is believed to have wiped out many colonies (NatureServe 2009).

Since the 1980s only one of the known popualtions was found to be inhabited, and no butterflies have been seen at this site since the 1990s, despite targeted searching by experts (NYSDOS 2002). The other known Long Island sites were also searched by experts in the late 1980s and early 1990s without success. One remote inland Atlantic white cedar swamp in Orange County where the species was found in the late 1970s still contains suitable habitat, and might be the most likely place to still harbor this butterfly in New York.

Shapiro (1974) reported two sites on the south shore of Long Island; the next mention of this species in New York is from about 1980, when five sites were known in Suffolk County and one in Orange County (Cryan 1985). However, this butterfly has not been seen in New York since the mid 1990s and many experts believe it is probably extirpated from the state.

Regardless of whether this Hairstreak still occurs in New York, all occurrences of Atlantic white cedar swamps, both coastal and inland, should be protected and managed to sustain the cedar trees. See NYNHP (2011a,b) and NatureServe (2009) for management recommendations and further references for manangement techniques in these community types.

This species occurs exclusively in coastal and inland Atlantic White Cedar swamps. Sunny glades with flowers within the swamp are favored locations. Adults stray at times up to 1/2 mile to nearby flowers (NatureServe 2009).

Hessel's Hairstreak is distributed in scattered, disjunct colonies along the Atlantic coastal plain from southern Maine to the Florida panhandle. The greatest density of colonies occurs in from southeastern Massachusetts through Rhode Island to southern New Jersey (Massachusetts NHESP 2007).

This is a small butterfly (1") with emerald green tailed wings; the upperside is dark brown with few obvious markings, while the underside has a reddish-brown ground color overlaid with with bright bluish green and white spots and lines. The 1/2" larva is deep blusih green with a series of subdorsal lustrous white boomerang-shaped bars on each segment, rendering it cryptic on the host plant (Rawson et al. 1951, MDIFW 2003, Cassie 2011).

Habitat is the most reliable factor to use, as Junipers are confined to dry Redcedar old fields and ridges, while the Hessel's occupies only Atlantic white cedar swamps.

Butterflies in this genus have been shown to change their tree perch positions in response to the position of the sun, often moving to the tops of the cedars at midday where they form leks, court, mate, and lay eggs (Johnson and Borgo 1976; Cryan 1985). The adults are often first noticed fluttering out from a tree that has been jarred and they remain primarilly within swamps but may travel up to 1/2 mile in search of nectaring plants (MDIFW 2003; Vaughn and Shepherd 2005; Cassie 2011). Adults suffer from bird predation and individuals in this genus only live for several days (Beck and Garnett 1983).

Hessel's Hairstreaks are easily overlooked due to low abundance, inaccessibility of the habitat, a short and unpredictable flight season, habit of perching high in the canopy, small size, and cryptic coloration and behaviors. Thus, very little is known of its life history in New York. Adults have been reported from May 23 only. In neighboring states the adult flight season is generally in May and early June (with a peak in late May), earlier into April southward into New Jersey and later in June northward in Maine. Northward from New Jersey a single spring brood is produced, while southward into North Carolina, a summer brood also emerges (MDIFW 2003, Massachusetts NHESP 2007, Vaughn and Shepherd 2005). However, there is some indication that this species may have historically been partially double brooded on Long Island (Cryan 1985). In Massachusetts, eggs are laid on cedar branch tips in late May and following a brief egg stage, larvae feed on new growth of the host plant for about a month, pupating in July. Pupae enter diapuse in July and emerge the following spring (Massachusetts NHESP 2007).

The time of year you would expect to find Hessel's Hairstreak reproducing, larvae present and active, eggs present outside adult, and pupae or prepupae present in New York.

Many authorities place this Butterfly in the genus Mitoura.

Beck, A.F., and W.J. Garnett. 1983. Distribution and notes on the Great Dismal Swamp population of Mitoura hesseli. Journal of the Lepidopterists' Society. 37:289-300.

Rawson, G.W., and J.B. Ziegler. 1950. A new species of Mitoura from the Pine Barrens of New Jersey (Lepidoptera, Lycaenidae). Journal Of the New York Entomological Society 58:69-82.

Information for this guide was last updated on: August 30, 2011