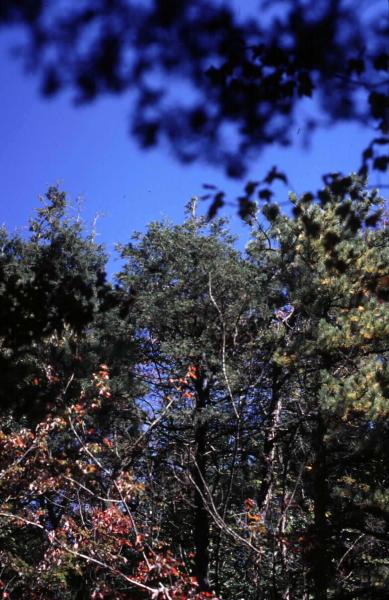 Atlantic white cedar can only colonize open boggy areas because its seedlings do not grow well in the shade. Fires, storms, or logging, may repeatedly level such a forest, but this tree will return again and again. Indeed, without catastrophies to repeat the process of invasion, red maple and black gum will in turn, become invaders within the swamp. The red maple invasion has already begun, but it is a gradual process. The seedlings of Atlantic white cedar, like pitch pine, will eventually fail to grow in the deep shade. Still, only if there are several centuries without a disturbance (a rare thing in nature), will there be a complete change.

There are very few occurrences of coastal plain Atlantic white cedar swamps statewide. A few documented occurrences have good viability and are protected on public land or private conservation land. This natural community is still declining somewhat due to threats related to development pressure and alteration to the natural hydrology. This community has declined from historical numbers likely correlated with past logging of white cedar and the conversion of swamps to commercial cranberry bogs that were subsequently abandoned.

Presently, there are several, small coastal plain Atlantic white cedar swamps mapped totaling just over 100 acres. The numbers seem to be declining for a variety of reasons. These wetlands are threatened by increased residential and commercial development, land clearing, alterations to the natural hydrology, and poor water quality.

The number and acreage of coastal plain Atlantic white cedar swamps have probably declined substantially from historical numbers due to the value of the timber and the conversion to commercial cranberry bogs (now abandoned). The total historical acreage is unknown but it was probably around 2000 acres.

Coastal plain Atlantic white cedar swamps are mainly threatened by increased residential and commercial development, land clearing, and alterations to the natural hydrology. Alterations to hydrology could include an increase in demand for freshwater lowering the water table, increase in urban-suburban run-off, ditching, draining, and impounding. Changes in the water table could also mean an intrusion of salt water into the swamp.

Management of coastal plain Atlantic white cedar swamps includes restricting access and maintaining water levels, flow, and quality. Where practical, establish and maintain a natural wetland buffer to reduce storm-water, pollution, and nutrient run-off, while simultaneously capturing sediments before they reach the wetland. Buffer width should take into account the erodibility of the surrounding soils, slope steepness, and current land use. Wetlands protected under Article 24 are known as New York State "regulated" wetlands. The regulated area includes the wetlands themselves, as well as a protective buffer or "adjacent area" extending 100 feet landward of the wetland boundary (NYS DEC 1995). If possible, minimize the number and size of impervious surfaces in the surrounding landscape. Avoid habitat alteration within the wetland and surrounding landscape. For example, roads and trails should be routed around wetlands, and ideally not pass through the buffer area. If the wetland must be crossed, then bridges and boardwalks are preferred over filling. Restore past impacts, such as removing obsolete impoundments and ditches in order to restore the natural hydrology. Prevent the spread of invasive species into the wetland through appropriate direct management, and by minimizing potential dispersal corridors, such as roads.

When considering road construction and other development activities minimize actions that will change what water carries and how water travels to this community, both on the surface and underground. Water traveling over-the-ground as run-off usually carries an abundance of silt, clay, and other particulates during (and often after) a construction project. While still suspended in the water, these particulates make it difficult for aquatic animals to find food. After settling to the bottom of the wetland, these particulates bury small plants and animals and alter the natural functions of the community in many other ways. Thus, road construction and development activities near this community type should strive to minimize particulate-laden run-off into this community. Water traveling on the ground or seeping through the ground also carries dissolved minerals and chemicals. Road salt, for example, is becoming an increasing problem both to natural communities and as a contaminant in household wells. Fertilizers, detergents, and other chemicals that increase the nutrient levels in wetlands cause algae blooms and eventually an oxygen-depleted environment where few animals can live. Herbicides and pesticides often travel far from where they are applied and have lasting effects on the quality of the natural community. So, road construction and other development activities should strive to consider: 1. how water moves through the ground, 2. the types of dissolved substances these development activities may release, and 3. how to minimize the potential for these dissolved substances to reach this natural community.

Inventory needs for this community type include more quantitative plot data on species composition and an inventories of all bryophytes (non-vascular plants such as mosses) and lepidoptera (butterflies and moths). More inventory is also needed to document the extent of this community type in New York.

Coastal plain Atlantic white cedar swamps are currently restricted to Long Island with a spotty distribution within the coastal lowlands in Suffolk County. The historical range of this natural community is restricted to the coastal lowlands in scattered wetlands on Long Island. This community type may also have been found on Staten Island (although we have no records).

Coastal plain Atlantic white cedar swamps occur on the northeastern United States coastal plain and in areas with a coastal climate (generally within 25 miles of the ocean) from New Hampshire to Delaware. It occurs in poorly-drained depressions or basins generally overlaying sand and gravel deposits.

Known examples of this community have been found at elevations between 10 feet and 10 feet.

The best time to visit these swamps is probably in June and July when a plethera of distinctive plants are in bloom. Among the most showy include the fragrant white blossoms of sweet pepperbush and swamp azalea, and the attractive pink flowers of sheep laurel. 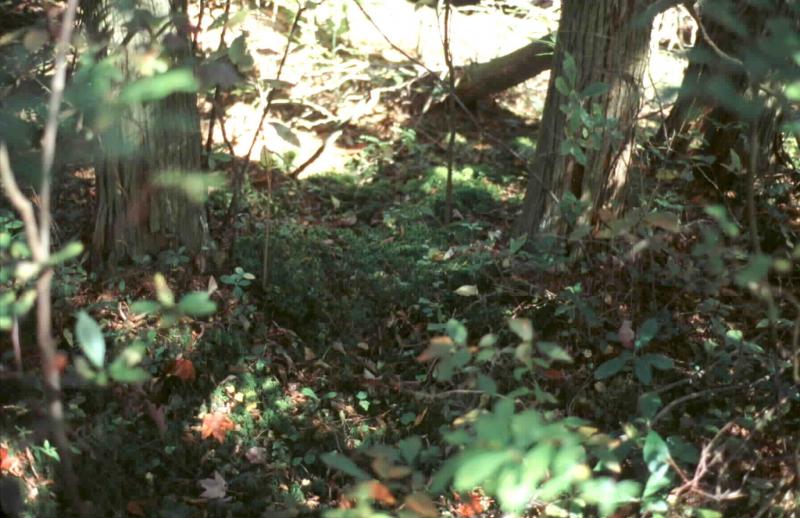 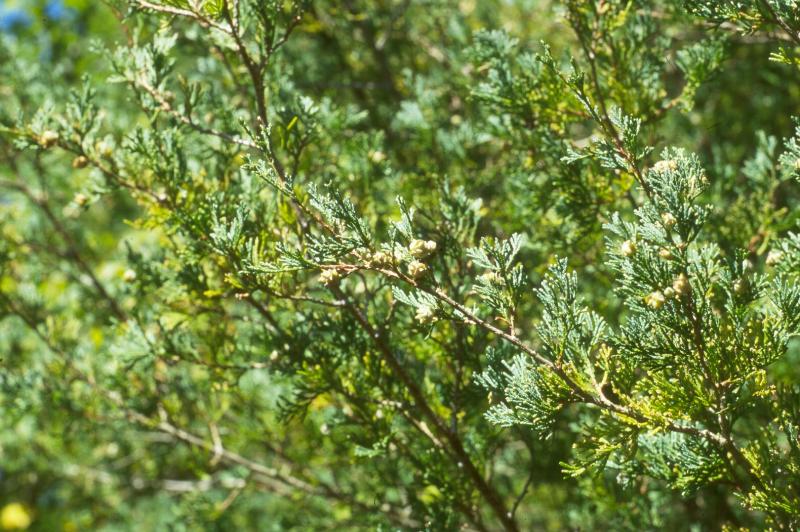 This figure helps visualize the structure and "look" or "feel" of a typical Coastal Plain Atlantic White Cedar Swamp. Each bar represents the amount of "coverage" for all the species growing at that height. Because layers overlap (shrubs may grow under trees, for example), the shaded regions can add up to more than 100%.